In light of a religious debate concerning the permissibility of cigarettes in Islam, the Hamas-led government in the Gaza Strip had restricted the use of money from tobacco taxes to infrastructure projects, but a source says it's now using those funds to pay salaries. 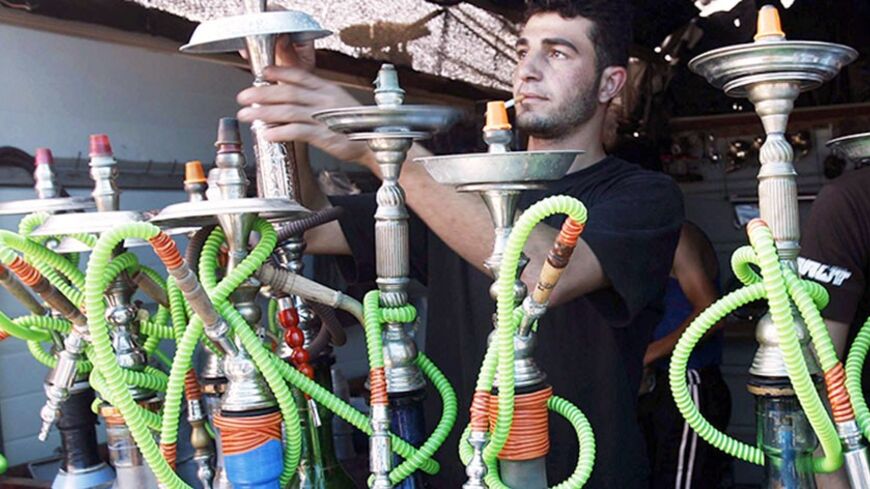 A Palestinian vendor prepares water pipes at his shop on the beach in Khan Younis, Gaza Strip, May 31, 2009. - REUTERS/Ibraheem Abu Mustafa

The government in the Gaza Strip, which has been led by Hamas since 2006, has stressed multiple times that the taxes imposed on cigarettes and shisha tobacco since 2010 are aimed at reducing smoking, and that they are used to fund infrastructure projects and not to pay government salaries — given that tobacco is forbidden in Islam. However, Al-Monitor has learned from a government source that the Hamas government, in light of its financial crisis, has begun using cigarette taxes to pay part of employee salaries.

Speaking to Al-Monitor, the source said: "Because of the fatwa issued by the Palestinian Legislative Council in 2010 prohibiting the use of funds collected from cigarette taxes to pay employee salaries, the government decided to limit their use to restoring infrastructure via sanitation projects. However, recently the government has been using money derived from tobacco taxes — which is placed in a special account at the local post office — [for other purposes], on the grounds that they consider it a debt to be repaid later."

The Ministry of Economy in the Gaza government had previously announced that the losses incurred from the shutdown of tunnels amounted to $230 million a month, after the Egyptian authorities destroyed the majority of tunnels along the border between the Gaza Strip and Egypt starting in June 2013.

According to economic analyst Omar Shaban, the Gaza government primarily depended on funds collected from taxes on fuel, cement and tobacco to pay its expenses. These funds were used to cover a large part of the government's expenses, along with other collected taxes such as income tax.

Speaking to Al-Monitor, Shaban said that the government in Gaza suffers from an "employment inflation," given that there are 45,000 state employees whose salaries are estimated to account for 70% of the government's budget. Shaban added that the tobacco tax alone was not enough to pay these large expenses.

For his part, Hatem Aweidah, the undersecretary of the Ministry of Economy, told Al-Monitor during a meeting that there is a strict government decision that any funds collected from tobacco will be used only for infrastructure. He noted that they will not use this money for administrative expenses, citing "the presence of a religious debate about food and drink obtained from cigarette [taxes] being religiously forbidden." He noted, "The government does not want to make any mistakes in this regard."

Regarding the total value of taxes collected from tobacco, Rami Abu al-Rish, the director-general of Customs Security, told Al-Monitor that the government imposes a tax of 1 Israeli shekel (29 cents) on each pack of cigarettes. Abu al-Rish noted that the Gaza Strip consumes about 5.2 million packs of cigarettes a month, thus the government collects 5.2 million Israeli shekels ($1.49 million). This is in addition to 500,000 Israeli shekels ($143,000) that are collected from taxes on other forms of tobacco, according to Abu al-Rish.

During a meeting with Al-Monitor, Abu al-Rish stressed that the taxes collected from tobacco are small compared to what they used to collect from gas and oil taxes. According to him, the latter sometimes reached as high as 47 million Israeli shekels ($13.5 million) a month. However, this figure now stands at zero, because of the closure of tunnels and the crackdown on smugglers along the Egyptian border.

"About six months ago, the tax imposed on each pack of cigarettes was 3 Israeli shekels [86 cents]. However, at that time the amount of taxes we collected was small — sometimes as low as 200,000 Israeli shekels [$57,000] a month — due to the fact that most cigarettes were being smuggled into the Gaza Strip illegally. Thus, we proposed lowering the customs duties on cigarettes, so that the cost of smuggling would be greater than the taxes," Abu al-Rish added.

Regarding the continued entry of tobacco into the Gaza Strip despite the closure of the majority of smuggling tunnels, and after Israel prevented the entry of cigarettes through commercial crossings, cigarette dealer Raid al-Shaar told Al-Monitor that cigarettes are a good that can easily be concealed in various means of transportation. Thus, Egyptian security do not always notice these cigarettes, unlike cars that transport fuel, for instance.

"However, there is still some risk, because the security forces occasionally confiscate cigarettes and tobacco. I lost more than $100,000 last month after [the security forces] confiscated a large amount of tobacco that was to be brought into Gaza via the tunnels," he added. Shaar noted that the most consumed cigarettes in the Gaza Strip are Greek-made Royal cigarettes, followed by the Egyptian-made L&M brand and Egyptian-made Marlboros.

Shaar noted that cigarette trade was difficult in the past when the government imposed a tax of 3 Israeli shekels on each pack, which made smuggling cheaper than legally importing. "Now, however, after the tax was reduced to 1 Israeli shekel, things became much easier," he added.

Abu al-Rish explained the mechanism for collecting tobacco taxes, saying, "In the beginning, the merchant must obtain prior authorization from the General Administration of Customs to bring tobacco through the tunnels. Later, when the cigarettes and tobacco arrive in Gaza, the General Administration for Customs Security, in cooperation with the Border Agency, collects the tobacco and places it in a warehouse in Rafah in southern Gaza. At the warehouse, a security stamp is added to the products, indicating that the taxes have been paid. The color of these stamps is changed frequently to prevent counterfeiting."

To find out the views of smokers, Al-Monitor spoke with taxi driver Abu Ramzi. While driving with a cigarette in hand, Ramzi said, "I smoke Marlboro cigarettes, yet when their price increases I smoke Royals. The problem is that there is chaos when it comes to pricing. There is no consistency in the price of cigarettes, which makes me feel that I am being exploited. However, I am compelled to smoke in light of the difficult conditions and increasing concerns."

Shaban noted that the instability in the price of cigarettes is due to the difficulty of imposing government control on a commodity that is imported in an informal manner. "Cigarettes are one of the goods whose prices are most sensitive to the circumstances. Cigarette prices are affected by the difficulty of importing them and the small quantities [of cigarettes found in the Gaza Strip]," he added.

According to Shaar, the blockade affected many smokers. "Since the closure of the tunnels six months ago, cement and building materials are not being brought into the Gaza Strip. This has resulted in tens of thousands of workers becoming unemployed. Given that [these workers] no longer have a source of income, cigarette consumption has decreased. It is worth noting that the vast majority of these workers used to smoke many cigarettes every day," Shaar said.

The Gaza Ministry of Health, in collaboration with the Ministry of the Interior and National Security, announced in January 2012 a law that bans smoking in public places, in public and private vehicles, and in government institutions and ministries.