Despite the largely successful security campaign launched by Egypt in February 2013 against the Palestinian border tunnels in Rafah in the southern Gaza Strip, there are reportedly Palestinian attempts to bring back some of the destroyed tunnels to life. 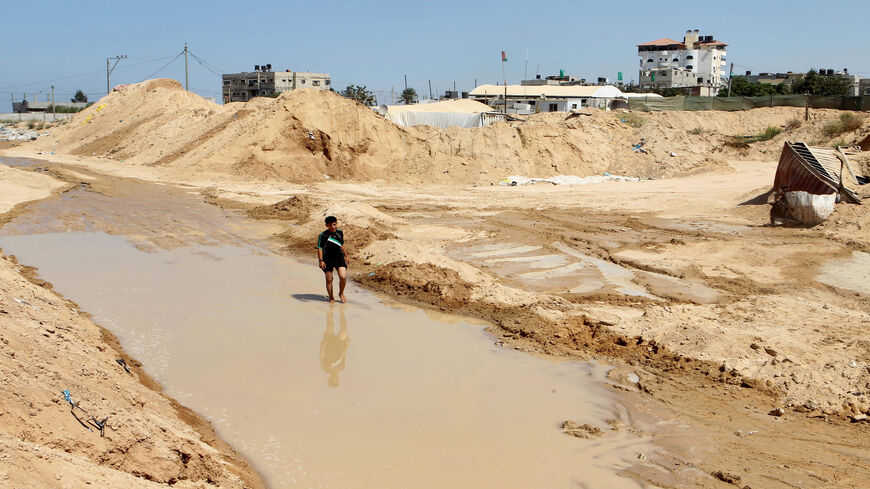 A Palestinian man walks in a pool of water next to the entrance of tunnels, used for smuggling supplies between Egypt and the Gaza Strip, Rafah, Gaza Strip, Sept. 18, 2015. - Said Khatib/AFP via Getty Images

GAZA CITY, Gaza Strip — Despite the largely successful security campaign that Egypt launched in February 2013 against the border tunnels in Rafah in the southern Gaza Strip, members of families and tribes in the city of Rafah told Al-Monitor that there are Palestinian attempts to restore some of the destroyed tunnels and resume their activity.

The phenomenon of Palestinian underground tunnels emerged on the border with Egypt after Israel imposed its blockade on Gaza in 2007, as Palestinian organizations, along with large families who live in the city of Rafah, dug hundreds of tunnels along the 14-kilometer (9-mile) border with Egypt, making huge profits by smuggling and selling Egyptian goods in the Gaza markets.

Egypt has taken many steps in the past to get rid of these tunnels due to the deteriorating security situation in the Sinai Peninsula. It launched a massive demolition campaign in February 2013 and set up a 500-meter (0.3-mile) buffer zone along the border with Gaza on the Egyptian side in October 2014. It flooded the area with the waters of the Mediterranean Sea in September 2015. The buffer zone was expanded 1,500 meters (1 mile) deep into the Egyptian side in October 2017.

In addition, Egypt built two walls on the border with the Gaza Strip: The first one was built using rocks in 2008, and the second, which is about 6 meters (0.4 miles) high and goes 5 meters (16 feet) underground, was built in February 2020 using reinforced concrete.

Egypt’s policy managed to eliminate most of these tunnels and led Hamas, which has controlled the Gaza Strip since 2007, to reel under the brunt of a stifling financial crisis, thus prompting the movement to increase taxes on merchants and residents.

Hamas sought to develop its commercial relationship with Egypt after the tunnels were destroyed. According to a report published by Al-Monitor on Feb. 22, 2019, the turning point in trade relations between Egypt and the Gaza Strip took place in June 2017, following understandings between Hamas and Egyptian officials aimed at opening a trade crossing between Egypt and Gaza, with taxes imposed on Egyptian goods passing through it set to go to Hamas’ treasury.

A source from a family in Rafah in the know on the border tunnels told Al-Monitor on condition of anonymity, “Despite the efforts of the Egyptian army to eradicate tunnels, many of these are still operational.”

The source noted, “My family owned seven border tunnels with Egypt before 2015; we lost all of them after they were destroyed by the Egyptian army. But we have recently embarked on attempts to restore and operate some of these tunnels."

He explained that there are Palestinian families — and not factions — behind these attempts to smuggle goods, especially cigarettes, honey, fuel and spare parts for various types of machinery that Egypt and Israel prevent their entry into Gaza, in addition to goods available in Egypt at a low price and sold in Gaza at exorbitant prices, such as cosmetics.

He noted that the aim of smuggling instead of officially importing these goods from Egypt is to avoid taxes imposed by Hamas, and that many of these tunnels became operational just weeks ago.

The source added that it is not his family alone that is trying to resume goods smuggling to the Gaza Strip via tunnels with Egypt, as this is done according to advanced arrangements aimed at bypassing the Egyptian security measures at the border. Chief among these measures, he said, is stretching the tunnel in order for it to extend to a distance of 3 kilometers (roughly 2 miles) into Egyptian territory, thus bypassing the 1,500-meter-deep buffer zone set up on the Egyptian side.

Mohammed Abu Jayab, editor of economic newspaper Al-Eqtesadia in Gaza, told Al-Monitor, “The resumption of tunnel smuggling operations will harm the financial revenues that the Hamas movement reaps from imposing taxes on Egyptian goods officially arriving in Gaza via the Rafah border crossing.”

While there are no official figures available on the size of such financial returns, Abu Jayab said that Hamas earns approximately 40 million to 50 million Israeli shekels ($12.3-$15.4 million) per month from taxes imposed on Egyptian goods entering the Gaza Strip.

He said that the commodities that bring the highest tax benefits to the Hamas treasury are fuel, cigarettes, molasses, cooking gas, muassel (tobacco used for hookah) and construction materials.

Abu Jayab added that about 4 million packs of cigarettes enter Gaza from Egypt on a monthly basis, and Hamas imposes a tax estimated at five shekels ($1.54) on each pack, which infers that 20 million shekels ($6.2 million) go to Hamas’ treasury every month from cigarette revenues alone.

About 9 million liters of fuel a month enter the Gaza Strip, and Hamas imposes a tax of 1.5 shekels ($0.46) on each liter of fuel. In other words, 13.5 million shekels ($4.16 million) per month go to the Hamas treasury from just fuel revenues.

While a spokesman for the Gaza-based Ministry of Interior refused to comment on the resumption of smuggling activity along the border, a high-ranking official in the ministry told Al-Monitor on condition of anonymity that his ministry “is deploying all possible efforts to prevent any tunnels from being dug toward Egyptian territory, and it supports Egypt’s efforts to eliminate such tunnels.”

He refused to give more details in this regard.

Talal Okal, a political analyst and writer for the Ramallah-based Al-Ayyam newspaper, told Al-Monitor, “The return of activity to tunnels is something that neither Egypt, Israel nor Hamas will like.”

He said that all three parties are negatively affected by the return of activity to the tunnels. Egypt, he explained, fears the infiltration of extremist elements from Gaza to Sinai through these tunnels, while Israel is afraid of smuggling materials and machines whose entry into Gaza is forbidden for fear of these being used to manufacture weapons against it.

“Hamas, on the other hand, does not want to reduce the value of the taxes it reaps from the official entry of Egyptian goods to the Gaza Strip via the Rafah crossing,” he concluded.