Gaza tunnels, how did it all start?

The division of Rafah led to the creation of the tunnels, which are still being used to smuggle goods from Egypt to the Gaza Strip despite Egyptian authorities’ efforts to the contrary. 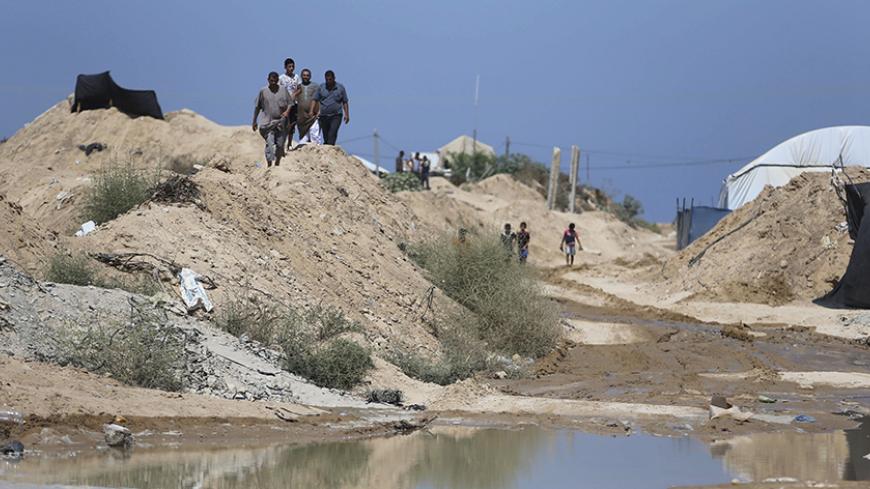 RAFAH, Gaza Strip — Egypt's latest campaign to destroy the smuggling tunnels connecting to Palestine has significantly limited smugglers' efforts, which could change the types of goods being secreted across the border and the methods used to do so.

Tunnels between the Palestinian and Egyptian sides of Rafah date back to the pre-blockade era in Gaza. Smuggling operations through primitive tunnels developed according to the political and economic status of the Gaza Strip, as well as varying Egyptian policies toward the Strip.

Historically, the Egyptian and Palestinian sides of Rafah were one city until Egypt agreed to a peace deal with Israel in 1979. In 1982, Israel withdrew from the Sinai Peninsula, and consequently, the Egyptian Rafah became politically and geographically separated from the Palestinian Rafah. Barbed-wire barriers were erected, and the Rafah land port was created to regulate movement between the two sides.

Thus, Rafah turned into two cities linked by social relations of familial and tribal nature. These relations led to the smuggling activity between Egypt and the Gaza Strip. The underground tunnels became the most obvious means of this activity.

Abu Marwan, who refused to reveal his full name, is one of the first smugglers and has been working since 1997. He told Al-Monitor, “Smuggling started near the historic al-Zaarab hill on the Egyptian-Palestinian border, where the barbed wire [placed] in 1982 separated lands owned by one family. Back in the 1980s and 1990s, Palestinian farmers were using asbestos and clay pipes to irrigate their crops on the Egyptian side, and the majority of agricultural irrigation wells were located on the Palestinian side of Rafah. As farmers lost hope to remove the new borders to oversee their farms, water fountains dried up after being abandoned by their owners. A few years later, these pipes were used as a primitive means to smuggle lightweight and expensive goods such as gold, drugs and light weapons spare parts.”

He continued, “In the late 1990s, the smuggling activity [increased], and for the first time, small tunnels of a diameter not exceeding [20 inches] each were dug as an imitation of old agricultural irrigation pipes.”

A worker who digs and restores tunnels told Al-Monitor on condition of anonymity, “Following Hamas’ takeover of the Gaza Strip in 2007 and the tightened siege on Gaza, the movement encouraged tunneling activity and opened smuggling operations with no restrictions. Tunnels were considered a means of resistance” and became more sophisticated and large enough to accommodate bigger items. Tunnel lengths ranged from 300 yards to more than 1 mile. Their circumference could reach more than 6.5 feet at a depth of 65-100 feet underground, the worker said.

The outbreak in 2011 of the Egyptian January 25 Revolution and the rise of the Muslim Brotherhood's Mohammed Morsi to power positively affected the relations between Egypt and Hamas, as Hamas believes itself to be a branch of the Muslim Brotherhood in Palestine. Under Morsi’s era, Egyptian authorities turned a blind eye to the tunnel smuggling, allowing the quantities and types of goods smuggled into Gaza to increase in an unprecedented manner.

The Hamas-led government in the Gaza Strip began imposing taxes in 2009 on goods received through the tunnels. The taxes became one of the group's important sources of funding.

After the June 30, 2013, revolution that ousted Morsi and led to the ascent of former Egyptian Defense Minister Abdel Fattah al-Sisi to the presidency, the feud between the Muslim Brotherhood and the Egyptian army intensified, affecting Egypt's policies toward Gaza.

Egyptian authorities fully closed down the Rafah land port, which since the beginning of 2015 has been open only 17 days, intermittently. Following the 2014 Israeli war on Gaza, the Egyptian army launched a military campaign to destroy the tunnels. In the first phase of this campaign, the army established a buffer zone with the Gaza Strip more than 8.5 miles long and stretching more than 500 yards inside Egypt along the borders with Gaza.

In the second phase, Egyptian army vehicles laid down giant water pipes along the border with the Gaza Strip as a prelude to flooding the tunnels with seawater. Rafah resident Bisan Yahya told Al-Monitor, “The Egyptian side already started pumping large amounts of seawater through huge pipes that it had laid down in the past few weeks along the border.” Bisan’s house directly overlooks the Egyptian-Palestinian border.

It seems that Rafah smugglers are repeating the first underground smuggling experiment and are extending concrete and metal pipes inside the tunnels. Al-Monitor visited the Egyptian-Palestinian borders and met with a tunnel restoration worker, who stated on condition of anonymity, “We [initially] padded the tunnels with wood panels to prevent the collapse of the soil. After the Egyptian army pumped seawater, we started reinforcing the tunnels with metal and concrete pipes of a [1.5-foot] diameter … to prevent water from reaching the inside of the tunnel, which [would] lead to its collapse. Padding the tunnels with wood panels is no longer efficient.”

He continued, “It is difficult to test the long-term efficiency of these metal and concrete pipes laid by smugglers. The Egyptian army operations significantly affected the smuggling of goods into the Gaza Strip, and the majority of Egyptian goods were depleted from Gaza’s markets. Smuggling is now limited to some lightweight and expensive goods such as cigarettes and shisha tobacco.”