The declining relationship between Hamas, Egypt

Many issues are adding fuel to the fiery relations between Hamas and Egypt. 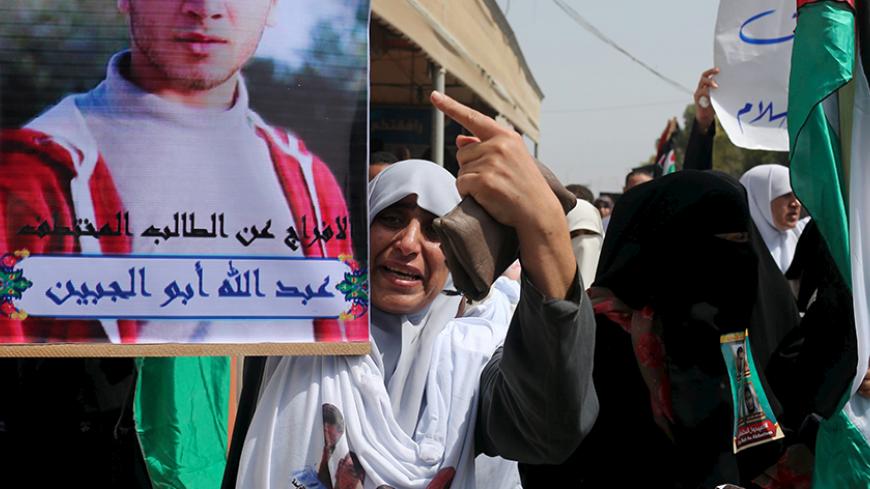 A Palestinian woman holds a poster depicting one of four members of Hamas' armed wing who were abducted in Egypt last month, during a protest calling for their release at the Rafah crossing between Egypt and southern Gaza Strip, Sept. 13, 2015. - REUTERS/Ibraheem Abu Mustafa

The unstable relationship between Egypt and Hamas in Gaza is unlikely to improve soon, as new pressures join long-standing tensions between the two. Even news that most consider positive — that the Rafah crossing could be reopening — is causing friction.

Egypt’s ongoing closure of the Rafah crossing is a particularly sensitive issue. The Ministry of Interior in Gaza announced Oct. 16 that the number of people who need to travel through the crossing has reached more than 25,000 people since the beginning of 2015, as Egypt has only opened the crossing for 19 intermittent days this year.

In an interview with Al-Monitor, Deputy Minister of Interior Kamel Abu Madi called on Egypt to recognize “the need to open the Rafah crossing permanently, lift the siege off Gaza, assume its responsibility toward Gaza and allow goods and people to enter the strip.”

During his Nov. 8 visit to Egypt, Palestinian President Mahmoud Abbas discussed the Rafah crossing and agreed with Egyptian President Abdel Fattah al-Sisi on a new plan to open the crossing once its management is handed over to the consensus government and the Presidential Guard. The opening will also depend on the security situation in Sinai.

Azzam Ahmed, a member of Fatah’s Central Committee, announced Nov. 17 that the Palestinian Authority (PA) had reached a deal with Egypt to reopen the Rafah crossing soon.

However, Ismail Radwan, a Hamas spokesman, told Al-Monitor that his movement “has not received any calls concerning the Rafah crossing, and no one from either the Palestinian Authority or Egypt communicated with us to discuss the issue of the crossing and the mechanisms to open it.”

Despite the political bickering between Hamas and Fatah, it seems Hamas is concerned with alleviating the daily suffering of Palestinians as a result of the Rafah crossing’s closure. Egypt still views Hamas as a wing of the Muslim Brotherhood, with which Cairo is locked in a bloody conflict. In addition, the PA seems to be playing up tensions between Palestinians in Gaza and Egyptians.

Abbas' recent visit to Egypt further aggravated tensions between Egypt and Hamas when he accused Hamas of holding direct negotiations with Israel in 2012 to extend the Gaza border toward the south almost 390 square miles toward Sinai, by annexing parts of the Sinai territory to the Gaza Strip. According to Abbas, Morsi had given his approval to annexing the land.

Ghazi Hamad, deputy foreign minister of Gaza, told Al-Monitor he dares Abbas "to prove a single word he is saying about the alleged agreement between Hamas and Morsi."

"[Abbas] has to stop promoting stories that even the naive cannot believe. The Hamas leadership has met with Morsi several times but never heard a word about Abbas’ claims. He is promoting himself as a hero defending Sinai.”

On Nov. 3, Al-Monitor visited the Egyptian-Palestinian border, where a large area of soil on the border between Gaza and Sinai has collapsed as a result of Egypt pumping water inside the tunnels since September to create a buffer zone stretching from the Mediterranean coast in the west to the Rafah crossing in the east.

Ambassador Alaa Youssef, spokesman for the Egyptian presidency, announced Nov. 8 that Egyptian measures to secure its eastern border are in full coordination with the PA, in reference to flooding the area with seawater.

In light of the escalating tension between Hamas and Egypt, talks have resurfaced about four Hamas members who were abducted Aug. 19 in Egypt. On Nov. 9, Tawfiq Abu Naim, a Hamas leader following up on the case, called on Egypt to disclose the fate of the abductees.

Moreover, the Oct. 31 Russian airliner bombing in Sinai made things worse. Egyptian security sources revealed Nov. 9 the identity of the perpetrator, Abu Osama al-Azhari, an Islamic State (IS) leader in Sinai, saying he had received intensive fighting and military training in Gaza and frequently moved in and out of Gaza through the tunnels.

However, Youssef pointed out, “IS has become an intercontinental group and it carried out attacks in Beirut, Sinai and Paris in a short period of time. It is shameful for any party to accuse Gaza of being involved in this incident, and Hamas opposes IS’ bloody operations."

The Hamas-Egyptian relationship also took a hit Nov. 5, when Palestinian fisherman Firas Mekdad was killed. The Gaza Interior Ministry said the Egyptian army purposely and without justification killed the man while he was fishing in Palestinian waters.

However, the Youm7 Egyptian newspaper, citing medical sources, reported Nov. 6 that the fisherman's killer was unknown. The paper did not mention the Egyptian army, which has kept silent on the incident so far.

On Nov. 7, Ismail Haniyeh, deputy head of Hamas’ political bureau, held Egypt responsible for the fisherman’s death, which he said demonstrated disregard for Palestinian lives within Palestinian waters. Haniyeh said the fisherman was only looking to make a living, but Egypt violated the principles of brotherhood between Palestinians and Egyptians by killing him.

This may be the first time Haniyeh has issued such heated statements against Egypt’s policy toward Gaza. He is usually known for his calm and desire to improve the Hamas-Egyptian relationship. In July, he had talked about positive signs in those relations.

Ahmed Youssef, a former political adviser to Haniyeh, emphasized to Al-Monitor that the fisherman's death is just one of many issues angering Palestinians. “Egypt’s closure of the Rafah crossing — the Gaza Strip’s only [crossing point with Egypt], the flooding of tunnels between Gaza and Sinai with salt water and the Egyptian soldiers’ killing of the Palestinian fisherman all provoke the Palestinians in Gaza, and Haniyeh’s statements express their anger.”