During his visit to Cairo, Palestinian President Mahmoud Abbas accused Hamas of negotiating with Israel regarding annexing part of the Sinai Peninsula to Gaza. 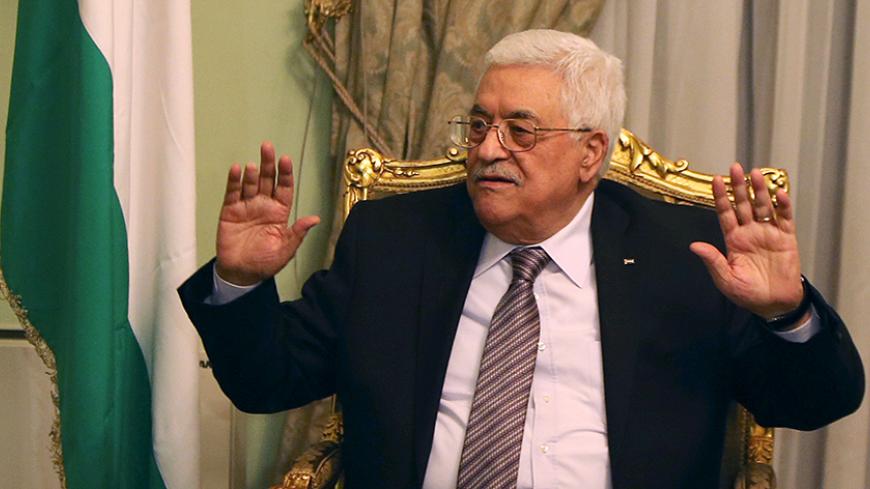 GAZA CITY, Gaza Strip — During a meeting with Egyptian journalists on the evening of Nov. 8, in Cairo, Palestinian President Mahmoud Abbas leveled accusations against Hamas of holding direct negotiations with Israel in order to annex part of the Sinai Peninsula to the Gaza Strip. Hamas categorically denied these accusations and accused Abbas of pursuing personal goals through these statements.

Al-Arabiya news website quoted Abbas as saying, “The Sinai project was on the discussion table between Hamas and Israel during the era [of Egyptian President Mohammed] Morsi to annex 1,000 [square] kilometers from the Sinai territory to expand Gaza.” Abbas said he rejected the projected, adding, “We will not accept one centimeter of Egyptian land.”

According to the website, Abbas said that Abdel Fattah al-Sisi — who is now president but was defense minister under Morsi — issued a decree during Morsi's rule classifying Sinai territory as a matter of national security, thereby shutting the door on the proposal. Abbas stressed that discussions on the proposal are still ongoing between Hamas and Israel.

For his part, Mousa Abu Marzouk, a member of Hamas’ political bureau, criticized Abbas' remarks in Cairo and posted on his Facebook page Nov. 9, “We have no intention of trading any inch of the Palestinian lands against other territories, contrary to all allegations and fabrications. We do not negotiate with Israel, we will not recognize it as a state and we will keep resisting it until its elimination, in spite of everyone. All campaigns of deception, slander, lies, falsification of facts and erroneous interpretations will not change the truth."

In this context, Yousef Rizqa, the political adviser to former Gaza Prime Minister Ismail Haniyeh, told Al-Monitor that these accusations are unfounded, fabricated and unsubstantiated. “Hamas has never held direct negotiations with Israel since its inception," he said.

Rizqa added, “Abbas is personally aware that these statements are false and fabricated and that they aim to intensify Hamas' isolation, to increase the blockade imposed on it, to keep flooding Gaza’s borders to destroy the tunnels and to maintain the closure of the Rafah crossing with Gaza.”

He explained that Abbas speaks in a way that pleases the Egyptian regime and media in order to gain their support against Hamas.

“Abbas seeks — through these meetings with the Egyptian media — to deter attention from the current uprising in Jerusalem, which he did not utter one word about,” Rizqa said.

He stressed that Egyptian officials made no comment on Abbas' statements, pointing out that Abbas did not provide any specific and factual information in relation to the accusations he made against Hamas.

Mkhaimar Abusada, a political science professor at Al-Azhar University in Gaza, told Al-Monitor, “A part of President Abbas’ statements — particularly the proposal to annex a part of Sinai to Gaza — is based on historical facts but at the same time I'm not sure about the credibility of the information regarding Hamas’ alleged negotiations with Israel on the matter."

He added, “After the Israeli withdrawal from the Gaza Strip in 2005, the former National Security Council chief, Maj. Gen. Giora Eiland, proposed in 2007 ​​expanding the Gaza Strip toward el-Arish area in Egypt in return for a tunnel that passes through Israel and links Egypt to Jordan by land. Meanwhile, Israel would annex the major settlements in the West Bank to its borders.”

Abusada said that the proposal to annex about 600-1,000 square kilometers [231-386 square miles] from Sinai to Gaza was designed to resolve the Israeli-Palestinian conflict, pointing out that this is an old proposal that has not been recently raised at the political level.

However, Abusada believes the timing of Abbas' statement in this regard was inappropriate as it coincides with the uprising. He said, “This is not the first time Abbas has spoken about this proposal and has accused Hamas of accepting it in order to increase the Palestinian division. As Palestinians, we desperately need to unite and overlook internal differences, to confront Israel and the settlements. We must unite to support the current Palestinian uprising.”

For his part, Iyad al-Qara, director general of Felesteen, a local newspaper in Gaza, told Al-Monitor, “Egypt has always refused this proposal. The fact that President Abbas is bringing back this matter now does not serve the Palestinian cause and it rather falls in Israel’s interest."

Qara said, “Abbas’ accusations of Hamas fall within the context of permanent bickering with Hamas in order to intensify the isolation imposed on it and feed hostility between the Egyptian regime on the one hand, and Hamas and the Muslim Brotherhood on the other.”

However, Qara believes the Egyptian media did not tackle these accusations against Hamas with much force since Abbas has repeated them on more than one occasion.

Abbas had made similar accusations against Hamas on April 4, when he said, “There is an Israeli theory that Hamas approves. This theory talks about the establishment of a state in Gaza, by annexing part of the Egyptian Sinai.”

He said there are ongoing discussions and meetings between Hamas and Israel, without naming the Hamas leaders involved.

Hamas for its part, issued a statement on the same day denouncing Abbas’ statements and describing them as “unfounded lies.”

Political analyst Talal Okal believes Abbas aimed, through these accusations against Hamas, to improve his ties with the Egyptian regime and outweigh the relationship between Egypt and dismissed Fatah leader Mohammed Dahlan.

Okal told Al-Monitor, “Egypt has an excellent relationship with Dahlan and believes he is a suitable replacement for Abbas as a result of Dahlan’s hostility to Hamas and the Muslim Brotherhood in Egypt, his rich political and security background and above all his exceptional relationship with the UAE, which has a very strong relationship with Egypt.”

Egyptian newspaper Al-Youm Al-Sabee said Nov. 8 that Dahlan headed to Cairo from Abu Dhabi (where he resides) on a private jet concurrently with Abbas’ visit to Cairo.

The newspaper said the visit of the two men to Cairo came amid Egyptian efforts to defuse the crisis and dispute, and within the framework of its diligence to bring about internal reconciliation between Fatah leaders.

According to Qara, Abbas was extremely annoyed by Egypt’s attempt to reconcile him with Dahlan, and this pushed him to level accusations against Hamas in order to export the crisis to it, although the annexation of part of Sinai to Gaza did not come up during official talks on his visit to Cairo.