Egypt has accused Hamas of being behind the latest attack in Sinai, but Hamas vehemently denied this, saying the security of Egypt is closely related to Gaza’s security. 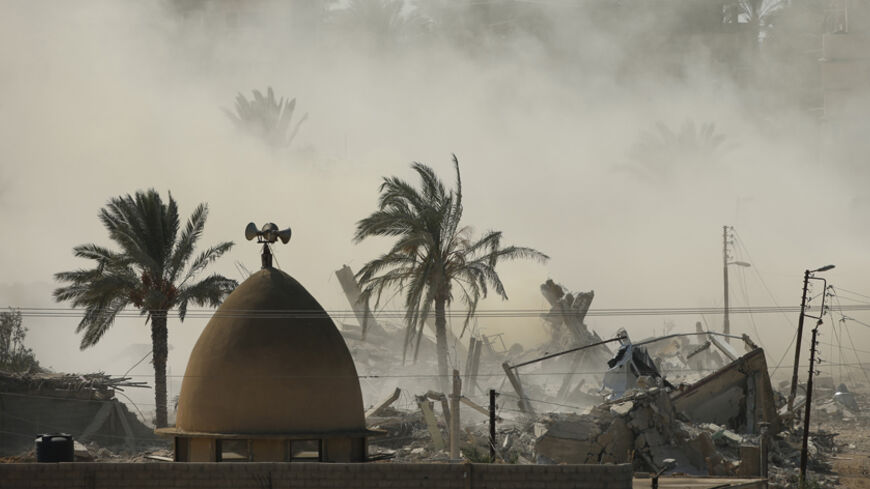 Smoke rises after a house is blown up during a military operation by Egyptian security forces in the Egyptian city of Rafah, near the border with the southern Gaza Strip, Oct. 29, 2014. - REUTERS/Suhaib Salem

Friday, Oct. 24, was not an ordinary day in Gaza. Political circles discussed the news from the Sinai Peninsula of the suicide bombing at two military sites that wounded several Egyptian soldiers and led to the deaths of 30 others.

Palestinian factions condemned the attacks that targeted the Egyptian forces in Sinai.

The attack on Sinai stirred concerns among the Hamas movement that it would affect its relations with Egypt, which significantly improved after the end of the war on the Gaza Strip.

It quickly became obvious that the events in Sinai would not stop there, but its repercussions would reach Gaza, as has happened in previous events. The director of the border crossings in Gaza, Maher Abu Sabha, told Al-Monitor, “Egypt has informed us that the Rafah crossing is now closed until further notice due to the Sinai incident, and without setting a time frame for its closure.” It was expected that “it would be closed for a long period of time, after a curfew and a state of emergency in Sinai were set for three months.”

He said, “We understand Egypt’s security situation and we grieve for every drop of Egyptian blood. However, we feel that we are facing injustice, considering the sanctions imposed on Gaza over a large number of patients, students and resident owners.”

It did not stop at the closure of the Rafah crossing. Hamas spokesman Fawzi Barhoum told Al-Monitor, “Egypt told us to postpone the indirect negotiations with Israel to establish the truce, scheduled for Oct. 27 in Cairo.”

Although no official Egyptian accusation against Hamas or any Palestinian party was issued regarding the Sinai incident, Egyptian Assistant Minister of Interior Gen. Samih Bishadi said on Oct. 26 in news statements that unidentified Palestinians participated in the attack in north Sinai.

Al-Monitor tried to communicate with Egyptian security and political officials, but they refrained from talking due to the sensitivity of the security situation.

However, Hamas seized every chance to announce its condemnation of the Sinai incident and concern for the Egyptian bloodshed. A member of the political leadership in Hamas, Khalil al-Hayya, declared in a television interview on Oct. 25 that Egyptian blood was very dear to Hamas’ heart, and that Hamas would not let any harm befall Egypt’s security.

At a news conference on Oct. 28, Hamas media official Salah Bardawil stated that Egypt had asked Hamas to check the possibility of certain individuals entering Gaza from Sinai; but no such case was registered.

Former political adviser for Ismail Haniyya, Gaza’s former prime minister and Hamas leader, Ahmed Youssef, told Al-Monitor, “Hamas stands side by side with Egypt in this tough situation. The movement is convinced that the collapse of the security situation in Sinai would be disastrous for Palestine. The future of our national cause is linked to maintaining the stability and the security of our Egyptian brothers.”

Al-Monitor interviewed a Palestinian security official in Gaza, who asked to remain anonymous. “Hamas has formed a security committee to follow up on the events in Sinai. The committee included senior security officers, and works in collaboration with the Ministry of Interior and the Ministry of Health to investigate whether or not there is a relation between Gaza and the Sinai attack. After conducting a security investigation, the committee was not able to find any evidence to prove a link between any party in Gaza and the incident,” he said.

The negative repercussions of the events in Sinai reached the borders of Gaza, where the Egyptian authorities established measures to move the residents from the border line to the Egyptian part of Rafah, as a prelude to the establishment of a buffer zone on the Palestinian border.

Residents of Rafah in the southern Gaza Strip revealed to Al-Monitor that during the past few days, they had witnessed the repercussions of the Sinai incident: Egyptian fighter jets were seen flying over nearby border areas, whether to monitor the field situation or to shell militants.

Youssef noted, “Hamas understands why Egypt would establish a buffer zone, as long as it does it within its territory. But the movement hopes that it will not affect the harsh humanitarian situation in Gaza,” ruling out the possibility of having Egyptian military tensions on Gaza’s borders.

However, Palestinian President Mahmoud Abbas announced on Oct. 25 his support for measures to be taken by Egypt to maintain security, since it serves the Palestinian cause and the Arab National Security.

Al-Monitor asked a prominent official in the Palestinian presidency, who preferred to remain anonymous, about the effects that the Egyptian measures would have on Gaza. “Egypt has the right to establish a buffer zone to maintain its internal security and to confront armed groups, and the Palestinian Authority is a part in this battle,” he answered, asking to “be precise before pointing fingers at any group of Palestinians, accusing them of participating in any operation that would harm Egypt’s security.”

Eiad al-Bozum, spokesman for the Ministry of Interior in Gaza, declared in a written statement on Oct. 27, that the Egyptian-Palestinian borders are under the complete control of the security apparatus in Gaza. The borders are secured and do not represent a threat to Egyptians, since protecting the Egyptian security is the apparatus’ priority and Gaza cannot be held responsible for the latest attack on Sinai.

Al-Monitor visited the Egyptian-Palestinian borders in the southern Gaza Strip, and observed as hundreds of Hamas’ security forces were spread in an unprecedented manner, as a way of emphasizing the movement’s decision to control the border from the Palestinian side.

The Palestinian factions held a memorial service in Gaza for the Egyptian soldiers who were killed. Al-Monitor attended the service and met with the vice president of Hamas’ political bureau, Moussa Abu Marzouk, who is close to the Egyptian authorities, since he permanently resides in Cairo.

Abu Marzouk told Al-Monitor, “Hamas could never graze Egypt’s security, and the Palestinian people have nothing to do with the Sinai incident. The only affected party here is Gaza, because Sinai’s security is Palestine’s security.” He also condemned “certain Egyptian media that accused Palestinians from Gaza of being involved in the incident.”

“Hamas offered Egypt its security help. We do not have any interest in destabilizing its security. We refuse to have security chaos in Sinai such as the ones taking place in Iraq and Syria,” Youssef said.