Egypt’s decision to expand its buffer zone along its border with the Gaza Strip is a sign that relations with Hamas are no closer to improving. 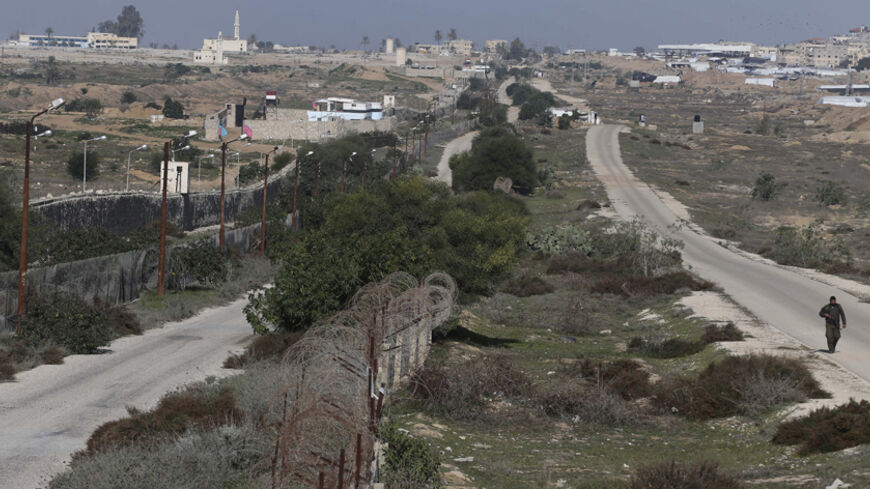 A member of the Palestinian security forces patrols near the border between Egypt and Gaza, in Rafah in the southern Gaza Strip, Jan. 3, 2015. - REUTERS/Ibraheem Abu Mustafa

RAFAH, Gaza Strip — Just when Hamas saw a window of opportunity in improving its relations with Cairo, the Egyptian army made successive moves along the border between the Gaza Strip and the Sinai Peninsula.

Abdel Fattah Harhour, governor of Northern Sinai, declared Dec. 31 that Egypt would start to expand the buffer zone on the borderline with Gaza in Rafah city to 1 kilometer (0.6 miles) deep. The zone would stretch along 5 kilometers (3 miles), which would allow better surveillance of the region bordering the Gaza Strip. Moreover, the use of tunnels to move weapons, or to make way for militants to pass through, would be forbidden.

Al-Monitor visited the Egyptian-Palestinian border in Rafah in the south of Gaza and noticed that the Egyptian army was persistently using its military vehicles to destroy more homes and dig large holes along the border.

An Egyptian official told Al-Monitor on condition of anonymity, “The step to expand the buffer zone was made to face the danger of tunnels along Gaza’s border, as well as the developed means for militants to dig and build such tunnels along the borderline with Rafah. The tunnels have become the main passage for armed members to enter Sinai and to receive logistic support, weapons and ammunition.”

Clearly, expanding the buffer zone will inflict yet another humanitarian crisis upon Gaza and its inhabitants, as the food supplies that reach the Gaza Strip through the tunnels will be cut off. This step will also cripple and weaken the armed Palestinian factions and will have negative repercussions on the dispute between Hamas and Egypt.

Nevertheless, it is noteworthy that Hamas did not comment on the Egyptian decision to expand the buffer zone to avoid aggravating the already present tensions between Gaza and Cairo, and to keep a thin line of compromise between the two parties. Yet, Hamas is well aware that this Egyptian decision does not serve to improve diplomatic relations, but to worsen them.

Moreover, Hamas’ silence vis-a-vis Egypt’s decision is part of its internal battle with the Palestinian Authority (PA) and the consensus government due to the latter’s slackening in solving Gaza’s problems. Hamas does not want to engage in several battles at once.

The new year started off with an Egyptian soldier shooting a Palestinian teenager along the border on Jan. 2. This prompted Mousa Abu Marzouk, deputy chairman of Hamas’ political bureau, to demand Egypt on Jan. 3 to open the border with Gaza.

Al-Monitor called several Hamas leaders for feedback on Egypt’s decision to expand the buffer zone, but they refused to comment without stating their reasons. However, Yahya Moussa, a leader in the movement and head of the Palestinian Legislative Council’s Oversight Committee, told Al-Monitor, “The decision to expand the buffer zone is not in line with the Gaza-Egypt relations that are based on communication and interaction. This decision aims at serving global and regional politics against the Palestinian people and will only increase the suffering in the Gaza Strip. These are free services that Cairo is offering to serve regional interests and to protect Israel’s security at the expense of our people’s interests and stability in Gaza.”

Meanwhile, Ahmed Youssef, former political adviser to Ismail Haniyeh, the former prime minister of the Gaza government, told Al-Monitor, “Egypt is free to implement the politics it sees fit within its borders, but expanding the buffer zone is a clear message from Egypt to Gaza. This message shows that the boycott and tensions with Hamas persist and that Egypt has no intention to improve relations with the movement soon."

The conflicting reactions of Hamas’ leaders reflect different points of view in dealing with Egypt, which Palestinians like to call “the elderly brother.” They believe Egypt has overcome the coup stage, and that the world and region consider its situation normal. Abdel Fattah al-Sisi has become an acknowledged president, especially after the recent reconciliation with Qatar.

Hamas circles saw all these factors as an invitation to deal with the de facto situation in Egypt and overcome their sympathy toward the Muslim Brotherhood.

Meanwhile, other sources in Hamas saw the Egyptian decision as a new chapter in the Israeli plan to tighten its blockade on Gaza after the late war, and to deprive Hamas of compensation for the lack of weapons, ammunition and rockets that it suffered. These sources also believed that the Egyptian decision should not be met with silence, at least across the media.

An arms trader in Gaza told Al-Monitor on condition of anonymity, “Expanding the buffer zone will have negative repercussions on the entry of weapons to Gaza through tunnels. This is due to Egypt’s intensified security pursuit of arms traders in Sinai and to the interruption of communications between the smuggling networks on both sides of Rafah.”

He added, “As a result, there have been successive obstacles to the supply of needed quantities of arms to Gaza, and their quality. Sometimes we succeed, and other times, we fail. But, the recent expansion of the buffer zone will put us in front of an unprecedented security challenge, which will have repercussions that we do not know how to deal with."

In his interview with Al-Monitor, Moussa underlined the effect of the expansion of the buffer zone on Hamas’ military capabilities, saying, “The resistance has its own arms, and it does not need foreign logistic aid. Still, putting constraints on our military capacities is a reward for Israel, but with our current arms, we can face any Israeli aggression on Gaza.”

Hamas’ words aim at boosting the morale of the movement’s militants who are suffering from a decline in arms supply, due to the destruction and targeting of tunnels along the Egyptian border. The Izz ad-Din al-Qassam Brigades have lately embarked on a personal weapon fabrication spree, but this does not compensate for the lack of high-quality weapons that Hamas will have to endure. These weapons, which include anti-personnel weapons and armor, cannot be produced in the Gaza Strip.

This prompted Youssef to tell Al-Monitor, “Egypt’s expansion of the buffer zone will prevent the arrival of advanced military techniques to al-Qassam Brigades, and it will definitely push the movement to search for local alternatives to face the Israeli army. The movement is about to find alternatives to the tunnels to receive necessary weapons, but it will not reveal their place nor nature.”

Evidently, Egypt’s decision to expand the buffer zone had a harsh and negative effect on Hamas, because it coincided with Gaza’s tensions with the Israeli army, and with its successive problems with the PA. As a result, Hamas feels it is surrounded from four sides.

Hamas is well aware that Egypt’s decision is political par excellence, even though it was declared through military and security statements. Moreover, the magic key to stopping the Egyptian measures along Gaza’s border is also political and should be done through the movement’s consensus with the Egyptian regime. However, neither Hamas nor Egypt seem ready to reach this consensus, which requires compromise from both sides. Until the consensus is reached, Gaza’s border with Egypt will remain a source of tension between both parties.