Tensions have surged between Egypt and Hamas following the deadly October attack in the Sinai Peninsula against Egyptian soldiers, which prompted an Egyptian media campaign against Hamas. 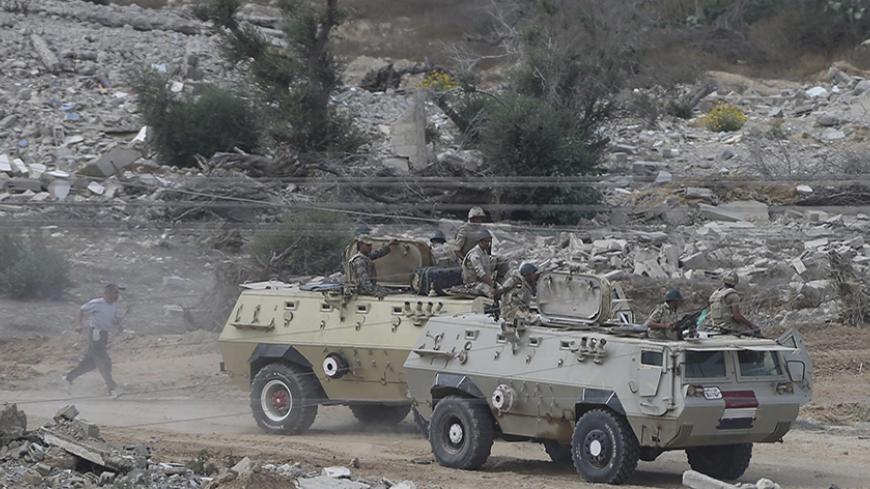 Egyptian soldiers keep guard during a military operation in the Egyptian city of Rafah, near the border with the southern Gaza Strip, Oct. 30, 2014. - REUTERS/Ibraheem Abu Mustafa

Relations between Hamas and Egypt continue to be at a standstill, with the tide of tension rising from time to time, especially following the latest developments in the Sinai Peninsula and the Egyptian army’s operations on the Gaza border.

The latest standoff between both parties was on Nov. 30, when Hamas denied Egypt’s accusations that it was involved in storming prisons during the January 2011 revolution.

Nevertheless, on Nov. 25, Mahmoud al-Zahar, a member of Hamas’ political bureau, said Egypt has been seeking to ameliorate relations with Hamas, with the aim of restoring an image tarnished by the “obnoxious” Egyptian media campaign against Hamas and the Palestinians. He also said that communications between the two sides have been underway to embark on a new chapter.

Egypt opened the Rafah crossing on Nov. 26-27 to allow the thousands of Palestinians stuck inside its territory to enter Gaza, after being closed for more than a month, against the backdrop of the attack that killed at least 30 Egyptian soldiers in Sinai on Oct. 24.

However, Cairo has yet to officially state that it seeks to repair relations with Hamas. On the contrary, on Nov. 28, Egyptian newspapers were rife with scathing comments against Hamas, following Zahar’s statements that Gaza could protect Egypt from any occupation.

On Nov. 29, Atef Adwan, member of Hamas’ legislative council, said he considered the Egyptian judiciary’s acquittal of ousted President Hosni Mubarak and his two sons and aides, to be a severe blow to the international judicial system.

The lawsuit scheduled to be heard at the Cairo Court for Urgent Matters in December, against Hamas’ Izz ad-Din al-Qassam Brigades, a group which Egypt regards as a terrorist organization that should be banned. has heightened the tension between Hamas and Egypt. The court accused the organization of being involved in terrorist attacks inside Egypt — most recently the killing of Egyptian soldiers in Sinai on Oct. 24 — and in smuggling weapons used to kill army and police forces and intimidate Egyptians.

Hamas spokesman Fawzi Barhoum told Al-Monitor that the lawsuit was “further proof of the ongoing targeting of al-Qassam brigades, following their triumph over the Israeli army during the last war.”

Salah Bardawil, a senior Hamas leader said Nov. 23 that Cairo did not lift a finger with regard to the truce with Israel, although it was brokering the deal. Egypt has not been following up on the prisoners’ release deal, the indirect negotiations for the cease-fire agreement and the issue of the air and sea ports. In addition, some Egyptian media outlets have begun a campaign against Hamas and the Palestinians in Gaza.

For his part, Osama Hamdan, Hamas spokesman for international relations, told Al-Monitor, “All attempts to drag Hamas into a confrontation with Egypt are futile. However, the movement will respond to clarify all lies.”

In an interesting development, the Palestinian Authority (PA) decided to get involved in the tension between Hamas and Egypt. On Dec. 1, President Mahmoud Abbas expressed his support for Egypt's measures taken on the border with Gaza, and the need to definitively destroy the tunnels between Rafah and Egypt. This includes Egypt’s building of a buffer zone with Gaza, and expressing understanding with the closure of the Rafah border crossing, which left thousands of Palestinians stranded outside.

On Nov. 9, Abbas sent a thank-you letter to the Egyptian journalist and owner of the satellite and political commentary channel al-Faraeen, Tawfiq Okasha, who considers himself a leader of the campaign against Hamas. Okasha had previously demanded that Egyptian President Abdel Fattah al-Sisi strike Gaza and target Hamas.

In the same vein, on Nov. 18, former deputy head of Hamas’ political bureau, Mousa Abu Marzouk, made scathing comments on Abbas’ Facebook page for thanking a man who humiliates Palestinians, attacks the resistance and belittles the people of Gaza, and who is not even admired by Egyptians themselves.

Later, on Nov. 24, the PA’s official television channel hosted Okasha, who hurled harsh insults at Hamas, demanding it be banned. He described the Palestinian movement as the “brotherhood of the devil.”

Hamdan told Al-Monitor, “Hamas does not have any problem with Egypt and has never felt to be in crisis with it. We welcome any positive step with Cairo, which has to decide what to do in this regard. Positive relations with Egypt regarding the Palestinian issue would serve both our interests, while any obstacles to this effect would come to the advantage of Israel.”

The strained relations between Hamas and Egypt further faltered when Sisi announced Nov. 23 that Egypt was ready to send its military forces to the anticipated Palestinian state in coordination with Israel and the PA to help local police and reassure Israel of their security role.

Abbas welcomed Sisi’s statement during their meeting in Cairo on Nov. 29, as the Palestinian president agreed to the entry of Egyptian forces to Palestine.

A senior Palestinian official close to Abbas, who spoke on condition of anonymity, told Al-Monitor, “We were surprised by Sisi’s announcement, especially at this time, given the halted negotiations with Israel. Meanwhile, Hamas continues to control Gaza and thus its reaction to Egypt’s statements is still unknown in light of the tension between both sides. However, we welcome any Egyptian forces on our territories to preserve our security in coordination with us.”

While Hamas kept silent on Sisi’s sudden announcements, Al-Monitor conducted several contacts with the movement, at home and abroad. All members agreed not to dwell on the subject given the critical security situation, as any reaction on the part of Hamas could further deteriorate relations with Egypt.

However, Al-Monitor learned from an inside source that “Hamas’ policy has not changed. The movement continues to distance itself from Egyptian internal affairs, and from any clashes with Egypt, hoping for better relations that are focused on common strategic interests and on the Israeli enemy threatening both of them.”