Hamas is positioning itself to welcome Abdel Fattah al-Sisi as Egypt’s likely next president, hoping it will result in an improvement in relations. 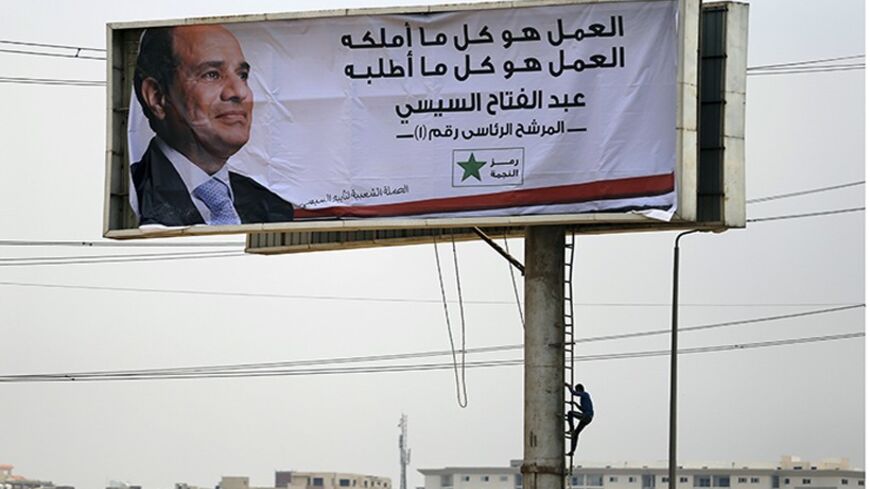 A worker climbs down after completing work on a campaign billboard of presidential candidate and Egypt's former army chief Abdel Fattah al-Sisi, along a highway in Cairo, May 12, 2014. - REUTERS/Amr Abdallah Dalsh

The preparations for the presidential elections in Egypt do not seem to be merely an internal Egyptian matter. The Palestinians are also closely following them, and Hamas in particular, knowing full well that the election’s results will affect the relationship between Egypt and Hamas.

Al-Monitor has learned that a general atmosphere has prevailed within Hamas in recent weeks indicating that the relationship with Egypt will gradually improve as the presidential elections on May 26-27 approach. The favored candidate, former army chief Abdel Fattah al-Sisi, wants to appear to have re-established communications with the "Palestinian brothers" and to have turned the page on the tensions that marred relations between the two sides since President Mohammed Morsi was ousted on July 3, 2013.

Perhaps the first sign that the Egypt-Hamas relationship has started improving, in preparation for Sisi’s rise, is that Egypt allowed Cairo-based Hamas deputy commander Mousa Abu Marzouk to go to Gaza for him to complete the reconciliation with Fatah.

Maher Abu Sabha, the director of border crossings in the Interior Ministry of the Hamas government in Gaza, asserted that for several days Egypt has been keeping the Rafah crossing open. Egypt has closed the crossing for 91 days since the start of 2014.

Al-Monitor has learned that the improvement in Egypt’s behavior toward Gaza was not spontaneous, but happened because Hamas sent messages to Egyptian decision-makers stating that Hamas wants Egypt to remain the sponsor of the reconciliation with Fatah.

Hamas has repeated that it would not give up its relationship with Egypt, despite the severe rupture after recent court rulings and the prohibition of Hamas activities in Egypt.

Al-Monitor obtained documented information from influential Hamas circles that reconsidering ties with Egypt has coincided with Abu Marzouk coming to Gaza, where he put forth ideas to his colleagues on the issue. The most important of those ideas is that Sisi, the next president, is a military man, and he knows that relations with the Palestinians, including Hamas, must continue if Hamas emphasizes its "national" nature and put its "Palestinian" nature above its "Brotherhood" ideology.

Ahmad al-Muslimani, an adviser to the Egyptian interim president, suggested exactly that in mid-April when he called on “Hamas leader Khaled Meshaal to leave the Muslim Brotherhood and preserve the identity of the Palestinian national movement.”

Hamas, for its part, responded to Muslimani’s call with a strongly worded statement, accusing him of interfering in internal Palestinian affairs, according to Hamas official spokesman Fawzi Barhoum.

The source, who says he is leading a push within Hamas to give priority to its national agenda over its ideological dimension, added, “The communications between Hamas and the Muslim Brotherhood have been hindered since the ousting of Morsi in July 2013. There is no significant direct contact between the two, due to the prevailing security situation in Egypt, and given the fact that Hamas leaders were unable to get there.”

The senior official, who is based outside of Palestine, said the separation between Hamas and the Muslim Brotherhood would benefit both parties.

In a pre-recorded interview broadcast on ONTV on May 5, Sisi refused to answer a question about whether he considered Hamas Egypt’s enemy.

That prompted senior Hamas leader Salah al-Bardawil to describe Sisi’s silence as “wise,” and “proof that [Hamas] is innocent of the charges against it. Sisi realizes that every word counts. He had to remain silent in response to the question and he didn’t say that he was angry with Hamas. He knows that hostility [toward Hamas] is due to the influence of the media that is hostile to [Hamas].”

A political official in Hamas, speaking on condition of anonymity, told Al-Monitor in a telephone interview from outside Palestine, “There is a trend shared by Hamas and Egypt not to close the door to bilateral engagement after the presidential election, which requires them to review their positions. Politics is not a zero-sum game and does not have absolute choices, and Sisi will not continue excluding Hamas because it is an essential part of the Palestinian equation. Hamas may [review its positions toward] Egypt and present itself to the Egyptian people and to Sisi by taking confidence-building measures in the next stage.”

But Hamas doesn’t seem to have achieved an internal consensus regarding this balanced reading toward a Sisi-ruled Egypt. An influential voice inside Hamas said, “Hamas is an element of stability in the region and has several strong cards that can sabotage the arrangements and [completely change the situation].”

Al-Monitor has looked at a position assessment report being circulated among the Hamas leadership in conjunction with the approaching presidential elections in Egypt and Sisi’s expected victory.

The internal Hamas document predicted that the “Egypt-Hamas relationship may be cool, as it was before the January 2011 revolution, and may be accompanied by mutual doubt, despite the fact that Egypt is aware that its national security extends to the Gaza Strip, and accessing [Gaza] requires having a relationship with Hamas, even if the differences were large.”

It should be noted that one of the results of the Hamas-Fatah reconciliation, which was sponsored by Egypt, is that Hamas not remain the primary ruler in Gaza. This means that friction with Egypt will decline when PA security services replace those of Hamas on the Rafah crossing.

In regard to the upcoming presidential elections, Hamas deputy leader Abu Marzouk said during his May 5 interview with Al-Monitor that Hamas “respects the choices that the Egyptian people will make in the coming period.”