A Hamas delegation recently met with Al-Azhar officials in Egypt, where the movement received support for the Palestinian cause. 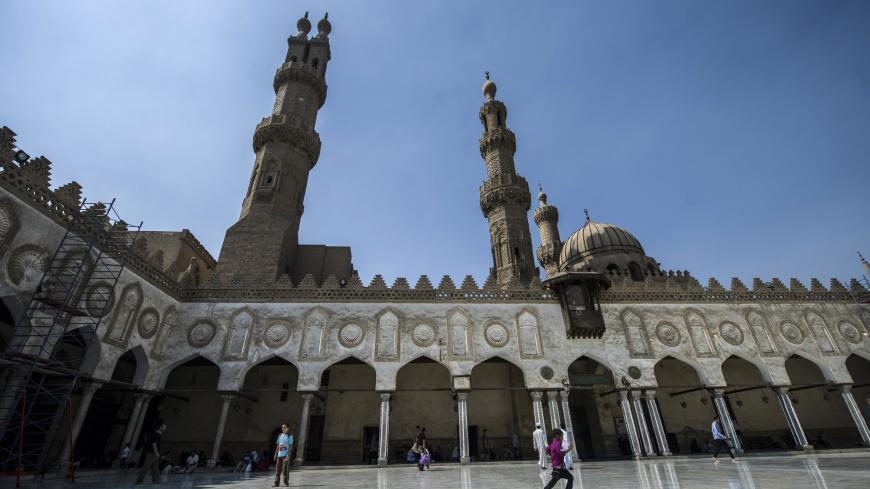 Haniyeh’s stop Feb. 7 at Al-Azhar came as part of a Hamas tour of Egypt that began Feb. 3. The Hamas delegation discussed with Egyptian intelligence representatives the situation in the Gaza Strip, as well as the truce with Israel. The delegation also paid visits to other Egyptian institutions, including the Cairo headquarters of Al-Masry Al-Youm newspaper Feb. 12, in an effort to change the negative way Hamas said it has been depicted by Egyptian media in recent years.

An Al-Azhar official told Al-Monitor on condition of anonymity that Hamas leaders requested the meeting with Egyptian authorities as part of the movement’s visit schedule in Egypt.

The official said a positive atmosphere prevailed during the visit, as Tayeb discussed mechanisms to ease the human suffering in Gaza, and addressed Israeli violations in Jerusalem’s holy places. Tayeb also implored Hamas to work toward ending the internal Palestinian division with the Fatah movement in the West Bank.

Hamas leader Mahmoud Merdawe told Al-Monitor of Al-Azhar’s importance to Hamas as a moderate religious authority recognized by the entire Arab world, thanks to its positions supporting the Palestinian cause and its refusal to indulge any international or regional initiatives that aim to subvert the cause.

Merdawe said Tayeb expressed his willingness to do everything in his power to help Egypt's leaders and intelligence service end the internal Palestinian division. Tayeb also stressed that Al-Azhar will continue its humanitarian support for the residents of the Gaza Strip, according to Merdawe.

Palestinian Minister of Endowment and Religious Affairs Yousef Adis hailed Al-Azhar’s role and its even-handed position toward both Palestinian sides, as well as its continuous calls to end Palestinian division and to protect the Palestinian cause from the perceived dangers facing it — most notably, the as-yet unveiled US plan for Mideast peace, which Palestinians fear will favor Israel.

Hosam al-Dajani, a political science professor at Gaza-based Umma University, ventured that Hamas’ recent visit to Al-Azhar serves two goals. One is to continue Hamas efforts to open up to the various components of the Egyptian people — particularly Al-Azhar, which is held in high esteem by Egyptians. The other goal takes into consideration Al-Azhar’s stature in the Arab and Islamic world and how its role supports the Palestinian cause.

Hamas has continued to hail Al-Azhar’s positions toward the Palestinian cause on many different occasions, most notably for rejecting the US decision to transfer the US Embassy to Jerusalem. Al-Azhar remains one of the few Egyptian institutions that has succeeded in distancing itself from the political enmity between Hamas and some past Egyptian regimes.

Hamas is aware, Dajani told Al-Monitor, that a good relationship with Al-Azhar and Arabic and Islamic religious authorities is key to protecting Islamic and Christian holy places from Israeli policies, especially the Al-Aqsa Mosque grounds, which are constantly raided by the Israelis.

A political analyst and former editor-in-chief for Felesteen newspaper, Mustafa al-Sawwaf, told Al-Monitor that Hamas’ visit signals an upward development in Egypt-Hamas ties that stems from both parties recognizing the need to bolster their relationship in the service of the Palestinian cause.

Sawwaf stressed that Hamas acknowledges Egypt’s integral role in the region. Egypt is in charge of a number of matters concerning the Palestinian cause, including the reconciliation, and the operations of the Rafah border crossing to allow residents to travel and to ease the Gaza siege.

The Hamas leadership’s last visit to Al-Azhar came in October 2012, when the Egypt-Hamas relationship was prospering under Egyptian President Mohammed Morsi.

It was a short-lived period of grace, however, as the relationship suffered tension and disruption after Morsi was removed in July 2013, to be eventually succeeded by Abdel Fattah al-Sisi. Sisi's regime considers Morsi's Muslim Brotherhood party a terrorist group and has worked to purge the organization from the country. Hamas has had strong ties with the Muslim Brotherhood.

The relationship between the Egyptian regime and Hamas saw a bit of resurgence as the movement elected its new leadership in February 2017 and since then has visited Cairo frequently. Also in 2017, Hamas claimed to have shed its ties to the Muslim Brotherhood, though that claim is widely disputed.

Those moves were followed by a number of trust-building steps between the two sides in June 2017, when Hamas began building a security buffer zone with observation posts along the border with Egypt, while the Egyptian government agreed to open the Rafah border crossing more often to facilitate Palestinians’ movement.

On May 15, 2018, Al-Azhar deployed a convoy carrying medical and relief aid to Gaza in the aftermath of the killing of dozens of Palestinians by the Israeli army, while hundreds were wounded, along the border between Gaza and Israel, where Palestinians gathered to protest the US decision to move its embassy from Tel Aviv to Jerusalem.

Egyptian intelligence started serving as a mediator between the movement and Israel to defuse tension and prevent a military confrontation in light of the Gaza Strip's dire humanitarian and economic situations. Egypt began working to create common ground between Israel and Hamas, aiming to develop an acceptable de-escalation agreement for both.