What was Hamas’ Haniyeh doing in Egypt for 25 days? 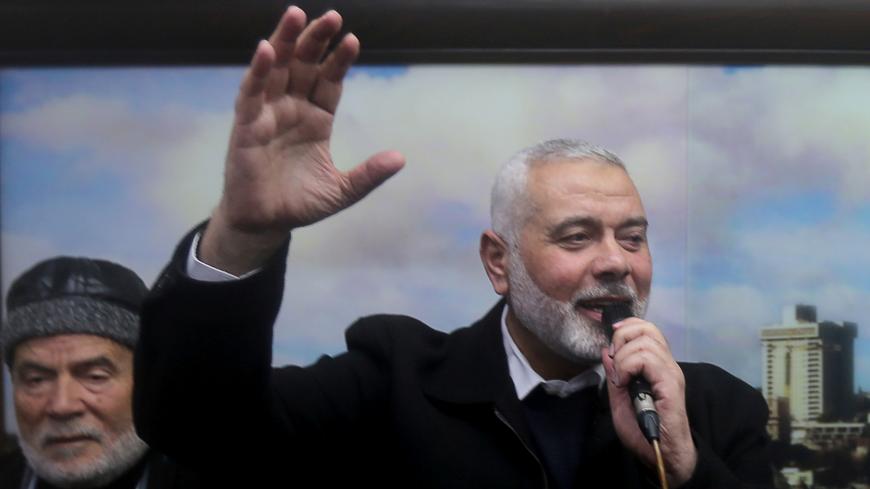 Since Hamas elected Ismail Haniyeh as head of its political bureau in May 2017, he has paid Egypt long visits in September 2017, February 2018, May 2018 and February 2019, during which he discussed ways to alleviate the siege on the Gaza Strip, achieve reconciliation and improve bilateral relations.

Haniyeh’s latest visit to Egypt lasted more than three weeks, from Feb. 3 until Feb. 27. He was accompanied by members of Hamas’ political bureau Khalil al-Hayya and Rouhi Mushtaha, and media adviser Taher al-Nounou.

Upon his return to the Gaza Strip, Haniyeh met with Palestinian journalists and told them about his visit to Cairo. He said that he discussed various issues with Egyptian officials, including strategic threats to the Palestinian cause such as "the deal of the century," the US Embassy's move to Jerusalem, Israeli settlement expansion, Egyptian efforts to restore national unity and the sanctions on Gaza imposed by the Palestinian Authority (PA). He announced that the relations between Hamas and Egypt have entered the phase of strategic dialogue.

On March 3, Haniyeh informed the Palestinian factional leaders of the outcome of his visit to Cairo during a closed meeting in his office in Gaza. Hayya announced during a press conference following the meeting that Haniyeh highlighted to Egyptian officials the risks surrounding the Palestinian cause, ending the Israeli siege on the Gaza Strip, the bilateral relations with Egypt and the importance of ending the Palestinian division.

Hayya told Al-Monitor, “The visit achieved positive outcomes and we are satisfied with it. Our relations with Egypt are advanced and strategic, and we are proud of them because they evolve day by day. Hamas wants Egypt to enjoy long-term safety, and it wants the same stability and security for Gaza, which will not be a burden or threat to Egypt’s national security. Egypt understands our stance toward achieving reconciliation and refuses the blockade on Gaza.”

Haniyeh’s schedule in Cairo was packed. On Feb. 25, he met with deputy head of Hamas’ political bureau abroad Mohammad Nazzal. On Feb. 12, he visited the headquarters of Al-Masry Al-Youm and met with its editor-in-chief. On Feb. 7, Haniyeh met with Al-Azhar Grand Imam Ahmed el-Tayeb.

On Feb. 5, Haniyeh held a long meeting with the leaders of the Egyptian General Intelligence Directorate, mainly Maj. Gen. Abbas Kamel. Haniyeh stressed the importance of protecting Egypt’s security, and he elaborated on Hamas' security measures in Gaza along its borders. Kamel thanked him for these efforts, which include Hamas bolstering its security presence in Gaza along the borders with the Sinai Peninsula and boosting its security coordination with the Egyptian army to control the situation in the border region.

On Feb. 5, Haniyeh and the Hamas delegation visited Palestinians who were wounded due to Israeli army fire during their participation in the marches of return on the Gaza borders, and who are receiving treatment in hospitals in Egypt.

The same day, Haniyeh met with Ziyad al-Nakhalah, secretary-general of the Palestinian Islamic Jihad, for the first time since Nakhalah was elected as leader of the movement on Sept. 28, 2018. Nakhalah, who resides in Beirut, arrived in Cairo at the same time as Haniyeh to discuss the stances of Hamas and Islamic Jihad concerning the deal of the century, and ways to foil it.

Hussam al-Dajani, an expert on Hamas affairs and professor of political science at Gaza’s Al-Ummah University, told Al-Monitor, “Haniyeh’s visit brought Hamas and Egypt closer, after Cairo’s role in Gaza started dwindling at the expense of Qatar and Turkey. Egypt seeks to use Hamas to serve its interests and hopes to boost Hamas’ role in the truce, an exchange deal with Israel and reconciliation with Fatah.”

Dajani added, “Hamas hopes Egypt will make efforts to remove the movement from European and American terrorism lists. I believe Egypt might also open a hospital, a bank and diplomatic representation office in Gaza in order to increase its influence in the enclave, although it did not explicitly inform Haniyeh of such plans.”

The most direct and main outcome of Haniyeh’s visit to Cairo was the release of four Hamas members who were abducted by unknown men in August 2015 upon their entry to Egypt through the Rafah border crossing.

Osama Amer, a Palestinian author who lives in Egypt, told Al-Monitor, “The main outcome of Haniyeh’s visit was the release of the abducted Hamas members and his meeting with an Al-Azhar imam who is considered the highest authority in the Islamic world. Haniyeh was also supposed to visit Pope Tawadros of the Coptic Orthodox Church, but he was outside Egypt.”

Amer added, “The visit of Secretary-General of the Arab League Ahmed Aboul Gheit was arranged, but he [could not meet with Haniyeh] due to his busy schedule to attend the African Union Summit in Ethiopia on Feb. 10 and the Arab-European Summit in Sharm el-Sheikh on Feb. 25.”

Haniyeh’s visit to Cairo in February was set to be followed by a tour of Arab, regional and international capitals. On Nov. 22, 2018, Hamas sources spoke about a tour that would include Qatar, Turkey, Egypt, Iran and Algeria, in addition to Lebanon, Kuwait, Mauritania, Malaysia, Indonesia and Morocco. But the visits did not materialize.

Hamas did not justify the delayed visits and did not accuse anyone of preventing them to avoid fueling tensions. Hamas wants to mend its regional connections, and it has been favoring silent diplomacy to facilitate Haniyeh’s tours that have been delayed repeatedly.

Basem Naim, head of the Council of International Relations in Gaza, told Al-Monitor, “Many reasons prevented Haniyeh’s tour, including the occasional Israeli escalation against Gaza and his inclination to remain here [in Gaza] to follow up on the security developments. Add to this the security situation in Sinai and inability to ensure his departure from Gaza to Egypt, as well as the domestic situation in some countries, which postponed the visits rather than canceled them.”

Hamas spoke at great length about Haniyeh’s accomplishments, but there are pending issues with Egypt, mainly the permanent opening of the Rafah border crossing and the removal of some names of Palestinians who were placed on Egypt’s travel ban list based on their political affiliations.

There is also the issue of the money Hamas leaders collected from Arab and Islamic countries after winning the legislative elections in 2006, which they took to Gaza through the Rafah crossing. But the Egyptian authorities seized the amount, which was estimated at $25 million to $30 million, without justification. However, Hayya said Feb. 28 that Egypt is not holding any Hamas money.

Hamas still hopes Egypt will pressure Israel to lift the siege off the Gaza Strip rather than alleviate it and use its leverage with the PA to ratify comprehensive reconciliation.

Abdul Sattar Qassem, professor of political sciences at An-Najah National University in Nablus, told Al-Monitor, “Hamas-Egypt relations are short-lived flirtations. Egypt is part of the US-Israeli axis and cannot take its relations with Hamas too far. It might, however, lure Hamas into the deal of the century, although I doubt Hamas would oblige.”

Hamas seems bullish about the outcome of Haniyeh’s visit to Egypt in terms of bilateral relations. But it hopes this optimism will materialize with Egyptian measures felt by the Palestinians in Gaza, rather than just promises.