Why Egypt chose this moment to release Hamas detainees

Egypt recently released Hamas and Gazan detainees in a gesture of goodwill as ties between the two parties keep improving. 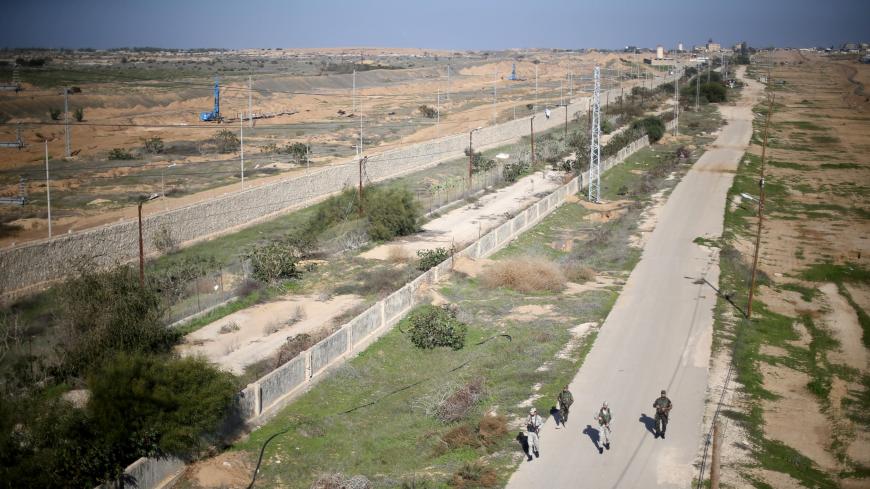 Palestinian security forces loyal to Hamas patrol near the border between Egypt and Gaza, in the southern Gaza Strip, Jan. 14, 2018. An expert says the Hamas-Egypt relationship has improved because Hamas has secured the Gaza-Sinai border. - REUTERS/Ibraheem Abu Mustafa

The recent rapprochement between Hamas and Egypt is continuing. In November, a delegation of Hamas leaders headed by the deputy head of its political bureau, Saleh al-Arouri, visited Egypt for talks on developing bilateral relations, ending the siege of Gaza and achieving Palestinian national reconciliation.

On Nov. 16, Ahmed Abdel Khalek, the head of Palestinian affairs in the Egyptian General Intelligence Service, participated in a memorial service for cadres of Hamas killed in Khan Yunis during an escalation with Israel following an undercover Israeli attack in Gaza that month.

In recent days, there has been a qualitative increase in the rapprochement between Hamas and Egypt.

On Dec. 30, Egypt released three Gazans — Hossam Abu Watfa, Muhammad Ghaith and Ayman Malihah — who were detained in Egypt for five to 20 months.

The head of Hamas’ political bureau, Ismail Haniyeh, invited the released detainees to his office that day and said their release represents a development in the relationship with Egypt; however, Egyptian officials did not make any comment to the media on the matter.

The families of released detainees said Abu Watfa had disappeared in April 2018 while leaving the Rafah crossing to renew his residency permit in Qatar. Malihah was detained at the Cairo airport upon his return from his doctoral studies in Malaysia in August 2017. Ghaith was detained at the Cairo airport in July but his destination was never mentioned.

Al-Monitor tried to contact the released detainees, but they refused to comment or reveal the nature of the questioning they underwent with the Egyptian security services.

It has become known that Egypt refrains from discussing such security issues in the media and thus does not speak about the reasons for the detention of any Palestinian. It limits discussions to the regular meetings between the Egyptian intelligence and Hamas.

A Hamas official told Al-Monitor on condition of anonymity, “Whenever the movement visits Egypt, it brings up the topic of Palestinians detained in Egypt and pressures the Egyptians to release them. Then all of a sudden, Egypt decides to release the three Hamas cadres without any explanation regarding either the reason for detention or the timing of the release.”

Hamas spokesman Hazem Qassem told Al-Monitor, “The timing of the release shows how the relationship between Hamas and Egypt has improved. Egypt has realized that we are not interfering in its affairs and that our members have not acted against it. Our relationship is steadily evolving for the better. We are constantly keeping contact on various issues, which increased our common interests, such as easing the conditions of the siege of Gaza or controlling the Egyptian security situation in Sinai.”

Qassem added, “Hamas appreciates Egypt's efforts, is positively responding to them and calls on the Egyptians to release the four detainees they are still keeping in holding.”

Hamas is aware that the main focus of this bilateral relationship lies in the fact that Egypt is the largest Arab state taking interest in Palestinian affairs. And given the Rafah border crossing between Gaza and Egypt, Hamas is interested in improving relations with Egypt; otherwise, the movement could remain isolated in the Strip. The continued blockade of Gaza and the closure of the Rafah crossing and the fear that violence in Sinai will spill over into Gaza press Hamas to establish a strong relationship with Egypt.

Egypt had arrested four Hamas cadres immediately after they left the Rafah crossing in August 2015. They were taken from a bus carrying Palestinian passengers in the Egyptian city of Rafah, without clear reasons for the arrest. Hamas leaders have vainly sought the release of the four every time there is a meeting Egyptian officials. In November, Egypt informed Hamas that it would soon release Hamas cadre Wahid Abu al-Kheir, whom it has held for 27 years. He was arrested for unknown reasons in 1991 during his visit to Egypt.

There are no accurate figures on the number of Hamas cadres detained in Egypt. The campaign started when Egyptian President Mohammed Morsi was ousted in 2013. Egyptian authorities under President Abdel Fattah al-Sisi’s rule accuse Hamas of carrying out security operations in Sinai and Egyptian territory, which Hamas denies.

Islam Shahwan, a former spokesman for the Interior Ministry in Gaza, told Al-Monitor, “There are many Palestinians detained in Egypt for various reasons, but we do not know the exact number. They are yet to be released despite the high coordination between Hamas and Egypt, and their efforts to preserve the security of the border between Gaza and Sinai by sharing security information, reducing the number of people prohibited from traveling from Gaza, and easing security checkpoint procedures for Palestinians traveling to Cairo through the Rafah crossing.”

The Dec. 30 release of the three detainees is an expression of a breakthrough in Hamas relations in Egypt, with growing mutual interest to confront the violence in Sinai, while a good number of wounded Palestinians are being treated in Egyptian hospitals. Hamas is convinced that Egypt is its only outlet to the rest of the world and that Egypt needs a strong hand to maintain its border security with Gaza. Hamas might have gained Egypt’s trust, but this has resulted in the movement losing ties with armed groups in Sinai; these groups accuse Hamas of cooperating with the Egyptian regime to fight them. Hamas, however, has not regretted losing such ties.

A Palestinian official close to President Mahmoud Abbas told Al-Monitor on condition of anonymity, “The Palestinian Authority (PA) believes this release of the detainees only concerns Hamas and Egypt, but we hope that Egypt's relationship with the Palestinians would be through the official authority, the PA, and not through factions. We hope Egypt will exert pressure on Hamas to achieve reconciliation.”

Egypt's release of the three Palestinians follows clear Egyptian actions to implement a truce between Hamas and Israel.

Hamas leader Ismail Radwan said Nov. 17 that the movement's meetings were positive, with the Egyptian side moving to alleviate the suffering of the Palestinian people. On Nov. 13, Hamas said it valued efforts to reach a cease-fire between the movement and Israel, stressing Egypt’s comprehensive role.

An Egyptian journalist who follows Palestinian affairs told Al-Monitor on condition of anonymity, “Talking about the release and publishing pictures of the three detainees was a mistake on Hamas’ part. This is a sensitive issue and the Egyptian security services neither addressed it publicly nor did the Egyptian media focus on it. The movement ought to have welcomed them back home without the media getting involved.”

The journalist continued, “This is because the circulation of such news will result in some Palestinians ending their support for Egypt, considering that Cairo is arresting Palestinian travelers at the Rafah border crossing. This is while Egypt is in fact trying to expand ties with various Palestinian segments in the Gaza Strip at the popular and official levels.”

Hussam al-Dajani, a professor of political science at Al-Ummah University in Gaza, told Al-Monitor, “Egypt did not randomly choose the timing of the detainees’ release. This was a response to a few steps that Hamas had taken upon an Egyptian request.”

Dajani explained, “Hamas secured the Gaza-Sinai border, which positively reflected on Egypt’s fight against terrorism. The movement renounced all affiliation with the Muslim Brotherhood in its political document in May 2017. It further expressed how much it wanted Egypt to succeed in its role when it comes to reconciliation and a truce, which strengthened Egypt’s stature both at home and abroad and emphasized Hamas’ power and good management of Gaza.”

Hamas sees Egypt's release of its cadres as an advanced step in the course of improving their relationship, despite having different positions on many issues. For instance, unlike Egypt, Hamas is against peace with Israel, and Cairo’s reservations when it comes to ties with Iran is faced with Hamas’ eagerness for such links. It is clear, though, that there is an Egyptian desire to calm the Gaza front by easing its suffering and implementing the truce between Hamas and Israel, which occasionally requires Egypt to please the movement by showing signs of goodwill, such as releasing detained Hamas cadres.