Will Egypt renew ties with Hamas?

After Egypt accused Hamas of assassinating its attorney-general, a Hamas delegation went to Cairo to try and patch things up with the new regime in Egypt. 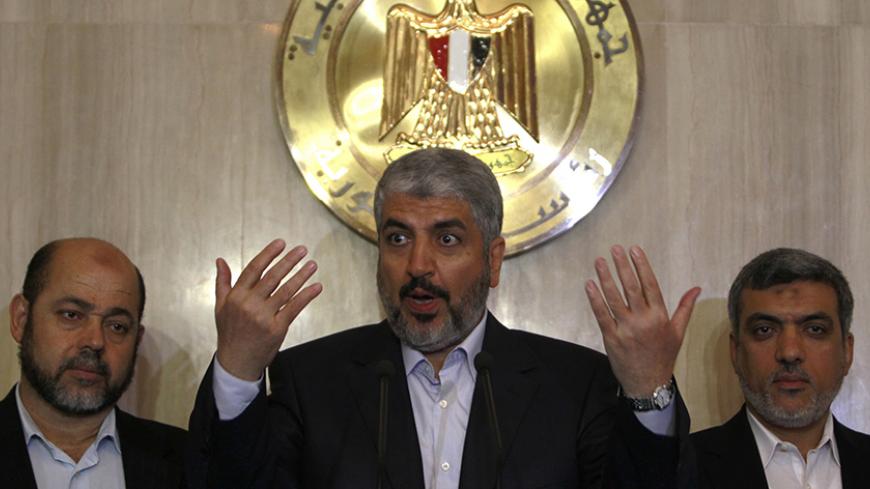 GAZA CITY, Gaza Strip — On March 12, a Hamas delegation made a five-day visit to Cairo for the first time since the Muslim Brotherhood regime in Egypt was overthrown on July 3, 2013. This was an important step toward the possibility of reviving the relations between Hamas and the current Egyptian regime and putting an end to the tension that has prevailed for years.

The Hamas delegation was formed of six prominent leaders, four of whom are from the Gaza Strip and members of the movement’s political bureau, namely Khalil al-Hayya, Mahmoud al-Zahar, Imad al-Alami and Nizar Awadallah, who traveled through the Rafah crossing that was opened especially for the delegation. From Doha, the deputy head of Hamas’ political bureau Mousa Abu Marzouk and political bureau member Maher Obeid joined.

The delegation’s visit to meet with officials from the Egyptian General Intelligence Directorate (GID) came shortly after Egyptian Interior Minister Magdy Abdel Ghaffar accused Hamas of being involved in the assassination of former Egyptian Attorney-General Hisham Barakat in 2015, which points to Egypt’s willingness to appease tension with Hamas.

A Hamas political leader in Gaza told Al-Monitor on condition of anonymity that previously there had been contact by phone between the Hamas leadership and the GID to discuss the reasons behind the tension between the two parties, before Hamas heard the shocking Egyptian accusations in Barakat’s assassination.

“There was talk of an Egyptian desire to host a Hamas delegation before this accusation that resulted in postponing the visit. However, phone calls were made again and the delegation scheduled a visit to Cairo on March 12,” the source said.

Concerned parties had high expectations regarding the possibility of bridging the gap between Hamas and Egypt as soon as the visit was announced. There were many leaks about the topics to be discussed, even before Egypt or Hamas made their official statements.

Another Hamas political leader source told Al-Monitor on condition of anonymity, “One cannot have high expectations in this round of talks. Hamas has a strong desire to do everything it can to make this rapprochement work and fix its relations with Egypt. However, expectations on whether it will succeed or not are still low.”

He added, “After years of estrangement filled with thorny issues, one cannot say that it would be easy [to patch things up], although it is a good thing that the Hamas delegation was welcomed in Cairo."

Egypt accuses Hamas in Gaza of interfering in its internal affairs by helping the Muslim Brotherhood confront the Egyptian regime, cooperating with the Salafists in the Sinai Peninsula and targeting Egyptian army forces in previous years, which Hamas has always denied.

Political author Thaer al-Akkad wrote in an article published March 15 on Donia al-Watan website, “Hamas will face a number of difficult questions and vital demands that Cairo wants answers to in order to change the official Egyptian position regarding the movement.”

Akkad said, “The first demand Egypt would have is for Hamas, as a Palestinian organization, to end its connections with the Brotherhood and not to interfere in Egypt's internal affairs and its national security, especially since Hamas has recently started hinting that it is only connected to the Brotherhood by ideology and that Hamas is a Palestinian movement whose sole mission is to defend the Palestinian people.”

A round of talks finally took place in Doha in February to reach Palestinian reconciliation between Hamas and Fatah, during which both sides agreed to continue their discussions without reaching a definitive agreement to end the division. Meanwhile, media outlets reported that Turkey is demanding Israel, during their ongoing talks, to lift the siege of Gaza and build a seaport, as a condition to restore the relationships between Turkey and Israel.

The source noted that there is an Egyptian desire to restore the Palestinian issue following the talks about reconciliation in Doha, as well as the Turkish pressure on Israel regarding the Gaza Strip, in addition to the international talks on the need to improve living conditions in the besieged Gaza Strip.

“We believe that Egypt is the only one able to achieve Palestinian reconciliation between Hamas and Fatah. Without it, no agreement could withstand and the internal reconciliation would be one of the files discussed in Cairo with Egyptian officials,” the source said.

He added, “The current changes in the Arab region is one of the main reasons behind the delegation’s visit to Cairo, as well as the current weak Palestinian political regime. And since Hamas is an important component in the political regime, Cairo wants to talk to Hamas again.”

Egypt has in the past sponsored truce agreements between Palestinian factions and Israel after any military confrontation in the Gaza Strip, the last of which took place in summer 2014 when both sides reached an agreement that was to be completed at a later stage. However, the agreement was never finalized in light of the tensions between Cairo and Hamas.

The Hamas political leader pointed out that Hamas is looking forward to Cairo’s return to the scene in order to renew truce talks with Israel and carry on with the exchange deal of Israeli prisoners in Hamas prisons — whom Israel believes to be dead already — and Palestinian prisoners in Israeli jails. In addition, Hamas hopes that Cairo would reopen the Rafah border crossing between Egypt and the Gaza Strip.

Abu Marzouk, who headed the delegation in Cairo, wrote on his Facebook page after the talks ended March 16, “The visit was fruitful and we have opened a new page with a friendly discourse with our brothers in Egypt to stress that we will not show them anything but goodness and peace.”

Meanwhile, Hayya stressed the importance of security issues discussed with Egyptian officials. He said in a press statement released in Cairo March 15, “We emphasize our commitment to Egypt’s stability and security and we stress our noninterference in its internal affairs and refuse to harm the Egyptian national security. We will not allow anything that stems from the Gaza Strip to harm Egypt’s security and the Egyptian people. We reiterate our duty to protect the border between the Gaza Strip and Egypt and to take all necessary action in this regard.”

Hamas’ strong desire to restore its ties with Cairo will push it to exert many efforts on the political level. However, Hamas will not be able to participate in fighting the Islamic State in Sinai, although this is what Cairo seems to need at this stage. In addition, Hamas seems to be waiting for developments to unfold in the Arab region and for the reformation of alliances to positively reflect on the movement.