The Egyptian interior minister made a shocking announcement by accusing Hamas of assassinating prosecutor Hisham Barakat back in the summer of 2015, further straining already fragile ties with the movement. 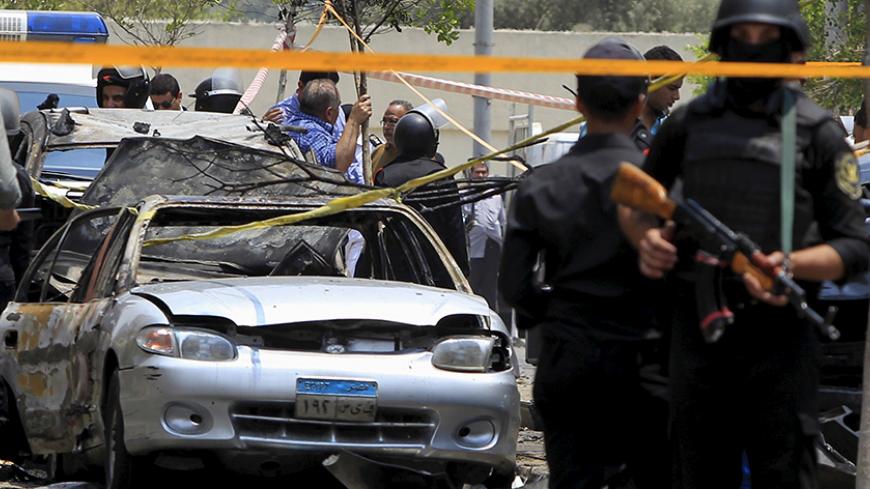 Policemen secure the site of a car bomb attack on the convoy of Egyptian public prosecutor Hisham Barakat near his house at Heliopolis district in Cairo, June 29, 2015. - REUTERS/Mohamed Abd El Ghany

Accusations are flying in Egypt about Hamas' alleged involvement in the assassination of Attorney General Hisham Barakat, but Hamas is giving as good as it's getting.

At a March 6 news conference, Egyptian Interior Minister Magdy Abdel Ghaffar accused Hamas of helping the Muslim Brotherhood kill Barakat with a car bomb June 29 in downtown Cairo. Ghaffar played a video of what he said were confessions from arrested Muslim Brotherhood members. The prisoners, according to Ghaffar, said that they had been trained in the Gaza Strip and that Hamas oversaw the assassination.

Hamas spokesman Sami Abu Zuhri quickly denied Egypt’s accusations that same day, saying they make no sense, as Hamas has been trying to improve relations with Egypt. On March 8, Hamas demanded Ghaffar's dismissal on the grounds that his accusations were inciting conflict and confusion and they harmed the relationship between the Palestinian and Egyptian peoples.

Ziad al-Zaza, former deputy prime minister of the Hamas government and member of Hamas’ political bureau, told Al-Monitor the charges are reminiscent of Hamas being accused of bombing the Saints Church in Alexandria in January 2011. "After the Egyptian revolution [that month], the Egyptian Ministry of Interior turned out to be behind the bombing of the church," he said. "This means that those making the accusations seek to tarnish the image of the Palestinian resistance, as there are local, international and regional parties that do not want a good relationship between Hamas and Egypt."

Egyptian newspapers in 2011 had indeed raised the possibility that former Egyptian Interior Minister Habib al-Adly plotted to bomb the Saints Church, using ministry employees, to quell the Christian protests and calm their tone against then-President Hosni Mubarak's regime. No one was prosecuted in the case.

Barakat’s assassination rocked the Egyptian public because he was close to Egyptian President Abdel Fattah al-Sisi. Perhaps Hamas fears Egypt will call on Arab states to classify the movement as a terrorist organization, as recently happened with Hezbollah.

On March 23, prompted by the Barakat accusation, the Alexandria Court of Urgent Matters will consider whether to designate Hamas a terrorist organization. Hamas is already considered a terrorist movement by the Cairo Court for Urgent Matters, which ruled on the matter in February 2015.

Khalil al-Hayya, a member of Hamas’ political bureau, told Al-Monitor, “These accusations are baseless. Hamas has never and will never have an interest in interfering in Egyptian affairs or those of any other country in the region. Such accusations shock and anger us because we find it strange that they would come at a time when Hamas is seeking to have good relations with Cairo.”

Hayya added, "As a Palestinian resistance movement that follows a centrist Islamist thought, we have no organizational or administrative relations with any movement outside of Palestine, including the Brotherhood.”

Perhaps the timing of the Egyptian accusations was surprising, particularly in light of Hamas’ previously announced idea of sending a delegation from its leadership to meet with Egyptian officials to mend frayed fences. Tension grew between Hamas and Egypt when Egypt established a buffer zone in April 2015 on the Gaza border with the Sinai Peninsula, and because of the ongoing closure of the Rafah crossing.

On March 7, Al-Monitor attended a press conference held in Gaza by Salah Bardawil, official spokesman for Hamas and a member of the Palestinian Legislative Council. Bardawil revealed that “the shocking Egyptian accusation against Hamas" came only one day after a phone call between Khaled Meshaal, head of Hamas' political bureau, and Egyptian Intelligence Minister Khaled Fawzy. The two spoke about arranging a delegation's visit to Cairo, he said.

"This stresses the movement’s positive intentions and its keenness to have positive relations with Egypt. I can assure you there are no Hamas-affiliated Palestinians in Egyptian prisons from [among] the defendants who appeared in the video screened by Abdel Ghaffar. None of them have entered Gaza, and they have nothing to do with either Hamas or its military wing, Izz ad-Din al-Qassam Brigades.”

Despite the assassination allegation, Hamas just announced March 8 that it will visit Egypt next week.

Mikhaimar Abusada, a political science professor at Al-Azhar University in Gaza, told Al-Monitor, “The timing of Egypt’s accusation against Hamas is wrong in light of talks about a breakthrough in their relationship. Such accusations could negatively affect the improvement of their relationship."

Though Hayya claimed Hamas has "no organizational or administrative relations" with the Muslim Brotherhood, that claim is not widely accepted.

"Perhaps Hamas is better off disengaging from the Brotherhood in Egypt," Abusada said. "Should the two continue to be connected, Hamas would be politically isolated and Egypt could take strict measures against Hamas, such as extending closure of the Rafah crossing, preventing Hamas members from traveling through it and carrying on with the destruction of the remaining tunnels between Gaza and Sinai.”

The assassination accusation also raises security questions. Though Ghaffar presented what he said were detailed confessions confirming these accusations, a thorough review of what the Egyptian authorities have announced over the past nine months indicates that three parties have been successively accused of killing Barakat.

Hamas is still at a loss about how to deal with this shift in its already-strained relationship with Egypt, because the recent accusations point to differences among the pillars of the Egyptian state about the future of the relationship with Hamas: At a time when the Egyptian intelligence minister was speaking with Meshaal in late February to arrange a Hamas visit to Cairo, just days later the Egyptian interior minister accused Hamas of killing its attorney general.

At the same time, given the nature of the current political regime in Egypt, the regime probably won't have a hard time agreeing on how to deal with Hamas.