In the new policy document, the Hamas movement announced its dissociation from the Muslim Brotherhood, which may improve ties with the Egyptian state that have been rocky after the ouster of President Mohammed Morsi. 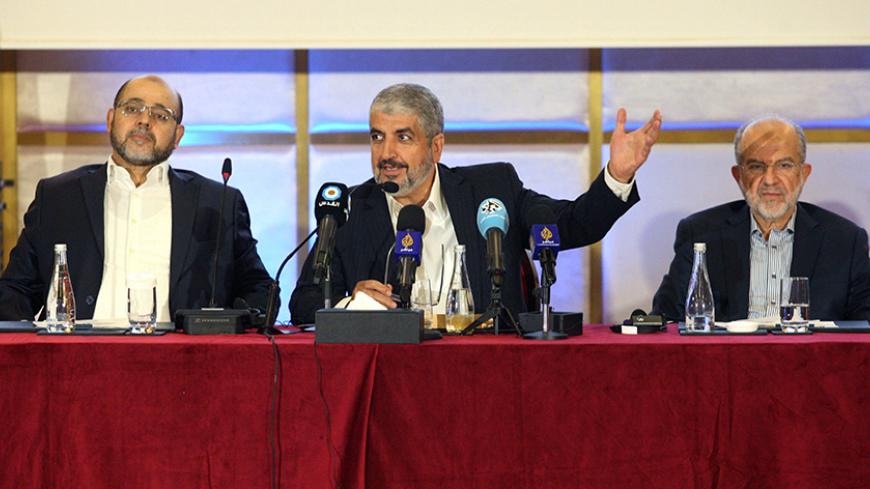 Hamas’ founding charter, which was published in 1988, defines Hamas “as a universal Islamic movement and one of the branches of the Muslim Brotherhood in Palestine.” Consequently, Hamas has been tied to the Brotherhood for the past 29 years.

In its new Document of General Principles and Policies announced May 1 from Doha, Qatar, many articles that were included initially and that mentioned the Muslim Brotherhood were removed, indicating a divorce between Hamas and the group.

After Egyptian President and Muslim Brotherhood leader Mohammed Morsi was toppled on July 3, 2013, tensions in relations between Hamas and Cairo surfaced. The two sides then hit a rough patch when Egyptian Interior Minister Magdy Abdel Ghaffar announced in a March 6, 2016, press conference the movement’s responsibility for the assassination of Egyptian Public Prosecutor Hisham Barakat on June 29, 2015.

In a press statement, Fawzi Barhoum, an official Hamas spokesman, said on the same day the Document of General Principles and Policies was published, “Even before the founding charter was issued, we had reiterated to the Egyptian administration that we have no organizational ties with the Muslim Brotherhood in Egypt and that we do not take orders from them.”

Former head of Hamas’ political bureau Khaled Meshaal agreed with Barhoum and tweeted May 1 that Hamas is part of the Muslim Brotherhood’s school of thought but that it is an independent Palestinian movement that enjoys an independent administrative and regulatory existence.

Al-Monitor reviewed a copy of the statement issued by the observatory. It said that the divorce at this particular time indicated Hamas’ refusal of the violent practices of the Muslim Brotherhood. The statement said this decision would push the group to reassess its behavior and would lead the members to denounce violence and return to society’s arms.

Regarding the timing of the separation, Hassan Mohammad, the director of the Fatwa Monitoring Observatory, told Al-Monitor over the phone that Hamas took this step at this time to wash its hands clean of the acts of violence that the Muslim Brotherhood was implicated in in Egypt and to avoid paying the price of the dispute between the Brotherhood and the Egyptian state.

Mohammad noted that Hamas’ split from the Brotherhood was a result of Egypt's successfully proving the group’s involvement in acts of violence through its armed branch, Hasm, which assumed responsibility for terrorist operations in Egypt, most recently on May 2 that targeted a security convoy and killed three police members and wounded others. The authorities accuse Hasm of having ties to the Brotherhood. In January, the Ministry announced the death of a member of Hasm during a security raid in al-Fayoum district.

Mohammad said that “the suicide bomber of St. Peter’s Church in Egypt was arrested in the past during a protest supporting Morsi. He then went on to execute the terrorist operation” after pledging allegiance to the Islamic State. It is noteworthy that St. Peter’s Church was bombed in December 2016 and claimed the lives of 29 people. The Islamic State claimed responsibility for the bombing.

Tarek Radwan, a member of Egypt's parliament and undersecretary of its Foreign Affairs Committee, told Al-Monitor over the phone, “It is currently not in Hamas’ interest to side with the Brotherhood or with parties that cannot offer it protection, aid or the negotiations’ card to prioritize the Palestinian cause before the international community.”

About the fact that Hamas’ policy document was announced from Doha, Radwan said it could be a possible change in Qatar’s politics. Qatari-Egyptian relations went downhill after Morsi was toppled, as Qatar supported him and sheltered many Brotherhood members in its territory. However, in the past three months, Qatar has halted its attacks on Egypt’s policies.

Former Brotherhood leader Sameh Eid said that it was only a matter of time before the group and Hamas split. The situation in Egypt in the past few years harmed Hamas. Still, Eid underlined Hamas' loyalty to the authority of Islam.

He told Al-Monitor, “Hamas agreed with the Egyptian regime and the GCC [Gulf Cooperation Council] countries. The articles in [Hamas’ new policy] document reflect a similar perspective of the Arab vision to solve the Palestinian cause, namely the establishment of a Palestinian state as per the June 1967 borders.”

Eid did not rule out that Egypt might have been informed of the document before its issuance. He noted that the consensus over the document articles was reached through agreement with the Egyptian administration during visits to Cairo by Hamas leaders, the last of which was in January.

During the January visit, which he described as successful, then-deputy head of Hamas’ political bureau Ismail Haniyeh met with Egyptian Intelligence Minister Khaled Fawzi. Haniyeh commented on the results of the visit to the press in the Shati camp in Gaza, saying, “Relations with Egypt are improving and will witness a remarkable shift.”

Mutual interests between Hamas and Egypt were obvious in this visit. Several points were discussed, such as securing common borders, considering the opening of the Rafah crossing and the possibility of expanding trade between Gaza and Egypt.

On May 7, Haniyeh was elected head of Hamas’ political bureau, which will handle the marketing of the new document in the Arab world during multiple visits that media sources believe will begin in Egypt.