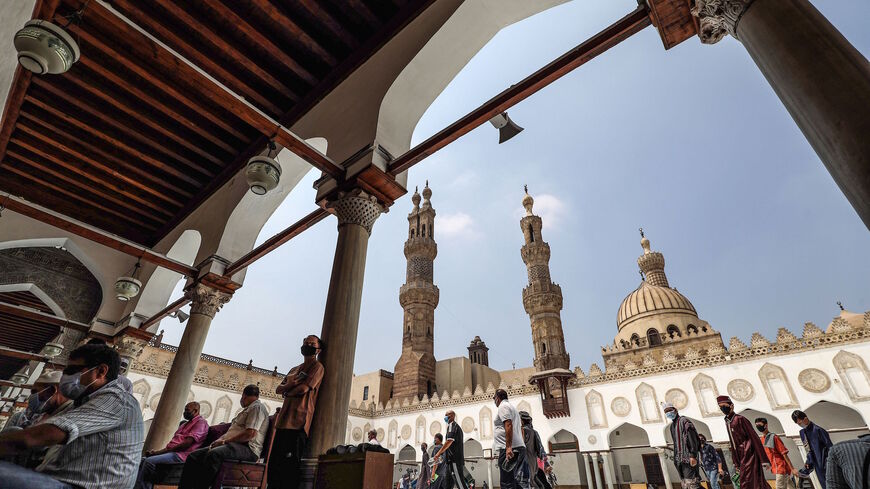 Muslim worshippers, mask-clad due to the COVID-19 coronavirus pandemic, arrive at the courtyard of the historic al-Azhar mosque in the center of Islamic Cairo to perform the Friday prayers under new pandemic restrictions, in Egypt's capital on Aug. 28, 2020. - MOHAMED EL-SHAHED/AFP via Getty Images

CAIRO — Egypt has recently stepped up its support for Russia in the fight against extremist ideologies and groups, most notably the Muslim Brotherhood. On Aug. 3, Egypt’s Dar al-Ifta (the Egyptian authority responsible for issuing religious edicts) announced the graduation of 21 imams from Russia from a training camp on the issuance of fatwas against extremist ideologies.

Dar al-Ifta said in a report on its portal on the same day that “the training program for Russian imams aims to provide them with the ability to issue fatwas while adhering to the moderate approach of Islam, and to monitor and analyze extremist ideas.”

In a statement on Aug. 4, the mufti of Moscow and the chief imam of the Moscow Cathedral Mosque, Ildar Alyautdinov, said, “The fatwa training program has been very beneficial for Russia’s imams. The Egyptian Dar al-Ifta was keen, through this training, to graduate Russian muftis who are well aware of the importance and seriousness of fatwas and the correct methods to issue moderate fatwas.”

Alyautdinov explained that the graduates of this training program will serve Russian Muslims in various regions and republics across Russia since they were selected from various places covering all Russian republics.

The director of the training department at Dar al-Ifta, Amr al-Wardani, noted in a press statement on Aug. 3 that the training program for Russian imams included 20 sessions, with two sessions per day over the course of 10 days. He indicated the training curriculum included sciences related to the formation of the mufti at the Sharia and civil levels to reflect the image of moderate and tolerant Islam.

The Dar al-Ifta training program included one Russian woman named Kavalova Elina who works as a Sharia researcher. She was trained on confronting extremist ideas among Russian female citizens.

Egypt and Russia share a hostile stance against the Muslim Brotherhood. Both countries have listed it as a banned terrorist group. The Russian ambassador to Cairo, Georgy Borisenko, had said in a press statement back in June 2020 that “the Muslim Brotherhood has been banned in Russia since 2004, well before Egypt did.”

He asserted that the Brotherhood cannot carry out any events in Russia and will be dealt with according to the criminal law if it does.

Muslims in Russia number around 20 million out of the country’s total population of 146 million citizens.

In December 2020, Egypt’s Grand Mufti Shawki Allam signed with the Spiritual Administration of Muslims of Russia a memorandum of understanding and cooperation between the two countries. Allam explained back then that “the agreement aims to form partnerships to spread moderation and combat extremist ideology, publish and translate books, and hold scientific meetings aimed to confront the ideology of extremism and terrorism.”

In the same month, the Egyptian Dar al-Ifta organized its first online training course for Russian imams and members of the Council of Muftis in Russia. The two-day training also aimed to confront extremism and radical ideas espoused and spread by extremist groups in Russia.

More recently, on July 29, the Russian Cultural Center in Egypt organized a symposium to combat extremist ideology. It was attended by a number of scholars of Dar al-Ifta and a Russian religious delegation. At the conclusion of the symposium, Alyautdinov said extremism in Egypt is similar to that existing in Russia. He stressed that there is a cooperation protocol with Egypt’s Al-Azhar to fight extremism in both countries.

Hisham Abdel Aziz, secretary-general of the Egyptian Supreme Council for Islamic Affairs, who also attended the symposium, said the symposium is the outcome of cooperation between Egyptian and Russian scholars in order to combat extremist ideology and spread moderate thought.

In early 2019, Al-Azhar expressed its readiness to provide scholarships and training camps for imams and preachers from Russia. In a meeting back then with a delegation from the members of the Russian Muftis Shura Council, Al-Azhar Undersecretary Sheikh Saleh Abbas praised the strong relationship between Russia and Egypt. He stressed his country’s readiness to provide all means of support for Muslims in Russia, whether through scholarships or Al-Azhar Academy for training imams and preachers to confront extremism.

Amr Eldeeb, a professor at the Institute of International Relations and World History at the Russian Lobachevsky University, told Al-Monitor Russia has had its shares of terrorist and extremist operations and has great experience in dealing with extremist groups in general.

“Russia is one of the first countries in the world to put the Muslim Brotherhood on the list of banned organizations,” Eldeeb noted. “Russian security leaders are well aware of the danger the group poses on security and stability.”

He argued that sending Russian imams to study in countries that adopted radical Salafi thought contributed to the spread of extremist ideology in Russia. “These imams returned to their homeland imbued with extremist ideas that Russia is trying to fight,” he said.

Eldeeb added, “Russia made a shift by sending its Muslim students to study at Al-Azhar in Egypt. It wants to benefit from the moderation of Al-Azhar. This falls in the best interests of both Cairo and Moscow in their war against terrorist and extremist ideology, most notably the Brotherhood ideology.”

Sheikh Khaled Emran, secretary-general for fatwas at Dar al-Ifta, told Al-Monitor, “The training programs for Russian imams focus on a primary goal, which is to promote moderate discourse and the foundations of coexistence in society, and to discuss and monitor extremist ideas.”

Emran added, “The Russian imams have been trained to acquire the skill of responding to, confronting and refuting these extremist ideas.”

“The training of Russian imams included female participants. The Islamic religion believes in gender equality when it comes to receiving knowledge. If a woman rises to the fore in preaching and issuing fatwas, she must be equipped with the skills to respond to religious women-related inquiries," he said.