Dar al-Ifta has created a graphics unit in an attempt to battle religious extremism through animated videos, but the jury is still out on whether the direction taken so far in two productions will persuade the target audience. 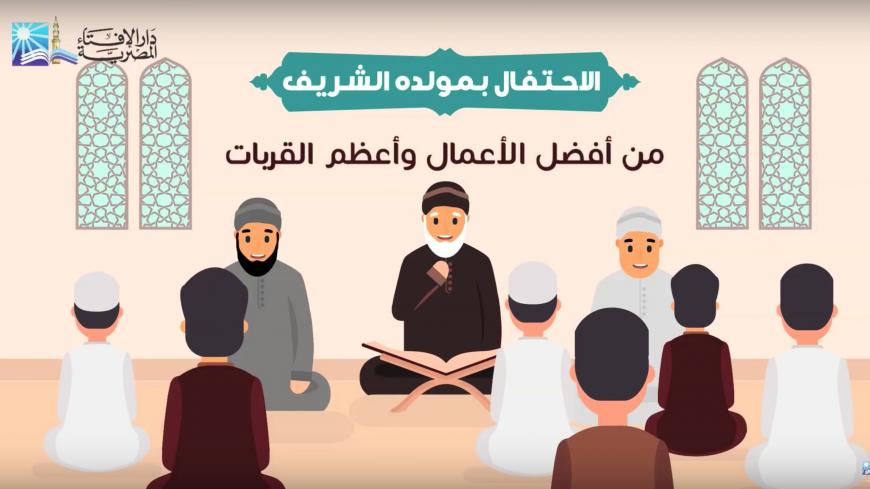 A still from a video produced by Dar al-Ifta, which has launched a series of short, animated videos in a campaign to counter Islamic extremism. Posted Nov. 14, 2018. - Youtube/EgyptDarAlIfta

On Nov. 15, the religious authority launched a graphics unit with the mandate to counter extremist ideas on Islam by providing authoritative information on Islamic teachings. The new unit has already released two videos, including a 90-second clip warning against sheltering or protecting extremist groups. The video explains that Islam prohibits assaults on human life and cites the provisions in Islamic law requiring the preservation of the life, property and honor of Muslims and non-Muslims alike.

As the Muslim world celebrated the anniversary of Prophet Muhammad's birth on Nov. 20, the unit released another video to refute claims that Muslims should not celebrate the occasion or buy sweets, as has become customary, to mark it.

A woman in the video advises, “Cheer up, celebrate and do not listen to the extremist whose ideology is only about forbidding the good things that God has permitted.”

Forthcoming clips are expected to counter fatwas (religious edicts) issued by extremist groups and their calls for jihad and reviving the caliphate. The issuance of fatwas has been chaotic for a while, with some religious scholars and preachers legitimating such acts as suicide bombings and the killing of Muslims who do not adhere to or believe in the extremists' ideology.

Negm noted that the conference addressed the need to devise effective means of preventing extremist groups from capturing hearts and minds and generally diffusing their radical visions of Islam through fatwas that he said “aimed at destroying the Arab states, including Egypt.” He said the new unit will also produce animated short films to counteract misleading interpretations of Islam that the extremists spread through their own videos, pamphlets and plays.

The views of religious scholars on the new animation unit have been mixed. Some laud it for diversifying the tools used to fight terrorism while others believe the videos are too infantile, more suitable for children than the adolescents and young people aged 16-25 that extremist groups seek to recruit.

Ahmed Karima, a religious scholar, preacher and professor of Sharia at Al-Azhar University, belongs to the latter camp. He said that the videos will be ineffective because they do not target the right audience..

“These videos are only beneficial as educational material for children in kindergartens,” Karima told Al-Monitor. “They will never have an impact on young people, who should instead be addressed through seminars, books, TV shows, etc.”

Mohamed Abdel Aaty, dean of the Faculty of Islamic studies at Al-Azhar University in Qalubiya governorate, pointed to the animation unit as a broadening of the tools used by Dar al-Ifta and Al-Azhar in their fight against extremism.

“The tools do not always have to be sermons, symposia and TV shows,” he told Al-Monitor. “We also have TV series, movies, plays and cartoons. These are other useful tools that can change the minds of people about various controversial issues promoted by terrorist groups.”

Abdel Aaty said that a range of animated videos should be produced to speak to different segments of the society and advocated the use of humor as a tool. Like Karima, he emphasized, “The videos should not only be addressing kids, but they should be extended to include other groups, especially young people.”

Egypt has been engaged in a stepped-up effort against extremist militants since the ouster of Islamist President Mohammed Morsi in 2013. The government of President Abdel Fattah al-Sisi has taken a two-pronged approach to religious extremism involving military operations coupled with initiatives developed by Egypt’s religious institutions, including Al-Azhar University and Dar al-Ifta, which aim to de-radicalize the population.

The kiosks installed at metro stations, a project launched in July 2017, permits preachers to offer advice on religious matters and the dangers of terrorism and extremism. Similarly, Al-Azhar University, the highest seat of Sunni Islamic learning, founded a nationwide initiative in 2016 that sent religious scholars into coffee shops to chat with young people about morality, religious matters and the true traditions of the Islamic faith. Al-Azhar has also established a school for female preachers with the aim of better disseminating the values of religion among Egyptian women.