Egypt's Islamic authority Dar al-Ifta has launched a search engine to track extremist content in the fight against terrorism and Islamophobia, but critics believe much more is needed. 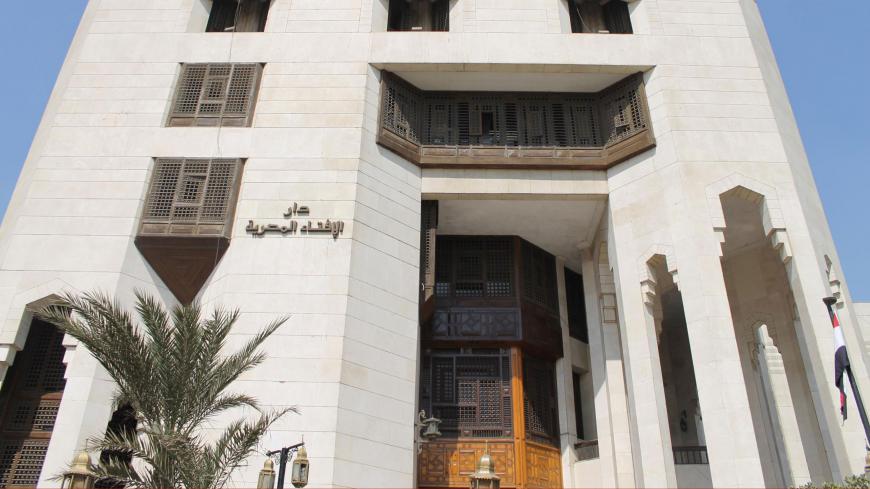 The headquarters of Dar al-Ifta, in Cairo, is seen in a picture uploaded April 15, 2013. - Facebook/Egypt.DarAlIfta.Eng

The search engine uses a web crawler program to systematically browse the web to look for keywords, such as "fatwa" and "halal" (permissible in Islam), to track extremist sites and detect Islamophobes. The data collected from news sites, social media and chat rooms are then classified according to topic, source and geographic location before being archived in a database for scholars, who can analyze the content to generate indicators to help policymakers decide how best to respond to threats.

Speaking to Al-Monitor, Tarek Abu Hashima, head of Dar al-Ifta's Strategic Studies Unit and director of the Global Fatwa Index, noted how extremists groups such as the Islamic State (IS) use social media to spread radical ideas and recruit new members.

"We need to understand terrorist ideology and identify the ideological justifications for violence in order to assess the scale of the terrorist threat and advise policymakers on how best to mitigate jihadist violence. Al-Azhar scholars offer alternative, moderate fatwas to curb radicalization," Abu Hashima said. "We also respond to rabid Islam haters who incite hatred and violence against Muslims by correcting any misconceptions about Islam in our Global Fatwa Index, published on a quarterly basis."

Since the launch of the search engine in mid-October, Al-Azhar clerics have identified more than 10 extremist websites and gathered no fewer than 4 million fatwas from formal and informal sources, many of them inciting violence, Abu Hashima said. He cited the Qatar-based Islamweb and the Egypt-based AnaSalafy as major sources for spreading radical ideas.

Abu Hashima also cautioned against the Euro Fatwa app, issued by the European Council for Fatwa and Research, a Dublin-based private foundation established by Sheikh Yusuf Qaradawi, a controversial Egyptian cleric who lives in Qatar. According to the Islamic Fiqh website, the app, until recently available through Google Play and the Apple Store, serves as a "simplified and concise guide to fiqh [Islamic jurisprudence] to enable European Muslims to adhere to the regulations and manners of Islam and to fulfill their duties as Muslim citizens."

"Suffice [it to say] that the introduction to the app was written by Sheikh Yusuf Qaradawi, who has advocated suicide bombings," Abu Hashima remarked. Qaradawi is a staunch supporter of the Muslim Brotherhood, which Egyptian authorities often accuse of spreading "fake news to incite "chaos and violence" in the country. After the military-backed ouster of President Mohamed Morsi of the Brotherhood in July 2013, tens of thousands of the group's leaders, rank-and-file members and supporters have been detained, many of them on what rights groups say are trumped up charges.

"We counter fatwas such as those that promise paradise for jihadists fighting against the enemies of Islam by telling youths that the greater jihad is the spiritual struggle to improve oneself," Abu Hashima said. "We also use verses from the Quran — such as the one that states, 'Whosoever killed a person (unjustly), it shall be as if he had killed all mankind' — in our arguments to combat violent extremism."

The search engine is the first practical step Dar al-Ifta has taken toward renewing the Islamic discourse in response to President Abdel Fattah al-Sisi's call to reform Islam, Abu Hashima noted. Sisi had complained in a January 2015 speech to Al-Azhar about the Muslim community being a "source of anxiety, fear, danger, killing and destruction for the rest of the world." Other steps he took to help rectify this situation included removing content to incite violence from school textbooks and regulating sermons.

Critics consider Sisi's effort as falling well short of the "religious revolution" that he promised in his much-publicized speech more than four years ago. Sisi had suggested in his address to Al-Azhar scholars that they opposed his reform plan and jokingly said of the grand sheikh of Al-Azhar, Ahmed el-Tayeb, "You wear me out." Indeed, Al-Azhar and its fatwa-issuing affiliate, Dar al-Ifta, have appeared defiantly resistant to Sisi's reform call, perceived by the religious authorities as an attempt to undermine their influence.

Centuries-old Al-Azhar has thus far only paid lip service to Sisi's exhortation, stopping short of overhauling its antiquated curriculum, which critics say "potentially creates an environment conducive to breeding extremism." There has also been little pushback from Egypt's religious institutions against IS militants despite the country being a victim of IS violence. Often described by supporters as "moderate," Al-Azhar, Sunni Islam's oldest seat of learning, has yet to declare IS apostate.

Abu Hashima was unapologetic about Al-Azhar's lack of action in this regard. "In Islam, there are strict rules regarding apostasy," he said, without elaborating on the reasons for the inaction.

Islam al-Beheiry, a writer, religious thinker and TV talk show host, believes the problem lies in faulty interpretations of Quranic verses by Al-Azhar scholars. In early 2015, these same scholars accused him of defaming Islam after he reiterated Sisi's call for reforming Islam on his show. He had also highlighted the need for the scholars to do away with "medieval Quranic interpretations." His comments so ruffled Al-Azhar's feathers that it filed a legal complaint against him. Beheiry was sentenced to five years in jail for insulting Islam, later reduced to one year. Sisi pardoned Beheiry in November 2016 after he had spent several months behind bars.

Still undeterred, on Sept. 29, Beheiry lashed out at Al-Azhar on his show "El Bosla" (The Compass), which is broadcast on the privately owned Channel 10. This time he accused its scholars of "confusing followers of the faith with their irrational interpretations of Quranic verses related to jihad." Beheiry lamented, "No other region faces a crisis as acute as the one faced by the people of our region, a crisis that harms the whole world with bloodshed and the increasing prospect of terrorist attacks occurring anywhere, including in the Arab world."

Beheiry blamed the ulama's fatwas on jihad for the situation, insisting that the problem will not be resolved by merely removing certain content from Islamic textbooks and replacing it with other narratives. "Reforming the religion requires an awareness of the true values and goals of Islam, a religion that advocates peace and security, not bloodshed. It was intended to make us content, not suffer."

Beheiry compared two seemingly contradictory verses of the Quran: one forbidding violence — "God dislikes aggressors" — and one appearing to sanction the slaughter of innocent non-Muslims — "Slay the idolaters wherever you find them and take them captive and besiege them." He argued that the first versus remains "absolute," still valid today, while the second pertained only to a particular period and circumstance, that is, to the early days of Islam when Muslims were fighting for their very survival. Beheiry asserted, "That is very clear for those who want to see it, but it is not what the scholars are telling us."

Al-Azhar has not responded to Beheiry's latest criticism, but its silence may in itself be a sign that the religious authority is finally succumbing to state pressure to embrace change. The launch of the new search engine to counter extremism is further indication of a possible shift in the religious authority's intransigence toward reform. It remains to be seen whether the initiative will be followed by concrete moves toward greater freedom of Islamic thought.