How Egypt's religious institutions are trying to curb atheism

Egyptian court records show thousands of women have filed for divorce over their husbands' atheism — even though religious authorities maintain there are only 866 atheists in the country. 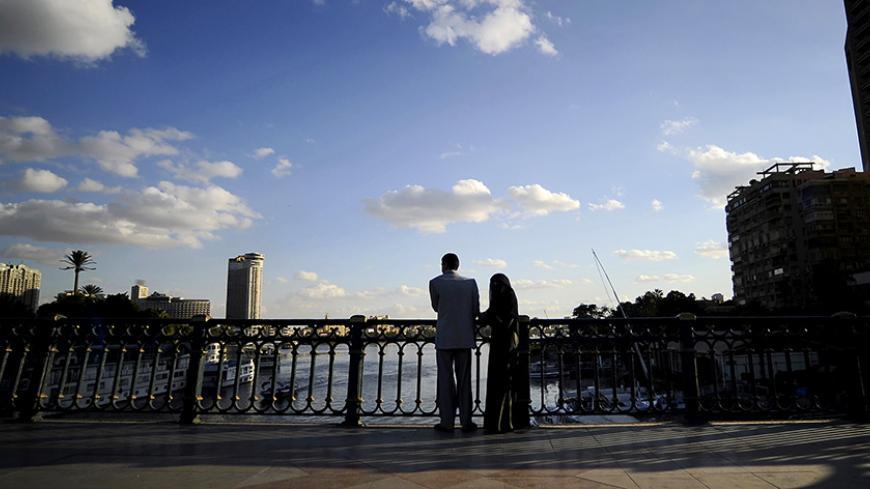 CAIRO — Recently released statistics from the Family Court affiliated with the Supreme Judicial Council, with offices across all governorates in Egypt, revealed that 6,500 women had filed for divorce, or "khula" — separation and returning the dowry to the husband — in 2015 over their husbands' "atheism or change of belief."

According to Article 3 of the Personal Status Law No. 1 of 2000, rulings with regard to divorce and separation cases are issued in accordance with either this law or the Islamic jurisprudence of Imam Abu Hanifa al-Nu’man in cases where the text of the law is not clear. Under this school of jurisprudence, a married Muslim woman has the right to obtain a divorce in the event that her husband has renounced his faith.

According to the second paragraph of the same article, the personal status of Christians is regulated according to Christian teachings, should the spouses be of the same sect or confession. In case of different sects, should the husband want to relinquish his Christian faith, the woman follows the same rules applied on Muslim women, and therefore has the right for divorce.

The court has yet to issue any statistics for 2016. It is still not known why the court refrained from doing so. The court might not have the right amount of data necessary for the statistics, or it does not want to shock the Egyptian community with the alarming rate of divorce because of atheism and change of belief.

It is worth mentioning that the Egyptian daily al-Youm al-Sabea had previously revealed some of the details of the Family Court statistics back in December 2015, collecting statements from unnamed judicial sources since the paper did not have access to the Family Court statistics that were published late last month. It seems that the court had preferred at the time to keep silent on the huge number of 6,500 divorce cases, compared to the usual official figures published by Dar al-Ifta.

On Dec. 10, 2014, Dar al-Ifta's Fatwa Monitoring Observatory published a report to monitor the causes of the increasing phenomenon of atheism among young people in Muslim countries, especially those in the Arab region that are undergoing major political and social changes.

In a press statement March 10, Ibrahim Najm, an adviser to the Grand Mufti of the Republic, said that the distortion of the image of Islam by the Takfiri terrorist groups through the application of wrong concepts, violence, murder and violation of human rights as one of the teachings of Islam is one of the most important reasons for the spread of atheism in the countries of the region.

He added that Dar al-Ifta approved an index prepared by the Red Sea Research Center, affiliated with Secular Global Institute in all countries of the world, stating that Egypt has 866 atheists.

Noteworthy is that the figures announced by the Family Court are alarming and not commensurate with those of Dar al-Ifta, which seems to be providing inaccurate data about the real number of atheists in Egypt.

Some, however, believe that women who had asked for divorce were hyperbolic and hasty in making their decisions. Saif Ragab Kazamel, dean of the Faculty of Sharia and Law at Al-Azhar University's Tanta branch, told Al-Monitor, "When a wife starts having doubts about her husband’s change of belief or inclination toward atheism, she does not have to rush and ask for divorce, as this would lead to the breakup of the family. Instead, she needs to try and preserve her family and marriage."

"In some cases, the husband is just going through difficult phases and a time of doubt in his own beliefs. This is when dialogue and communication are essential to redirect him on the right track, as opposed to rushing to ask for divorce. The wife could also call for her husband’s family members to help guide him, unless he confirmed that he wants to relinquish his faith despite all her attempts to deter him. This is when she could file for divorce," Kazamel said.

Kazamel further stressed the importance of discussion and communication before deciding to get a divorce, as this is part of the Sharia teachings for those who wish to no longer follow Islam. "According to Sharia, when a person decides to leave Islam, it is important to proselytize them and try to give them a chance to repent," he said.

On the need to issue a fatwa for women to ask for divorce in case their husbands declare their atheism, Ahmed Karima, a professor of comparative jurisprudence at Al-Azhar University, said in a telephone interview on a show March 17 on the Sada TV channel that no Muslim woman should remain married to a man who converted from Islam to any other religion, be it monotheistic or not, or who became atheist. He noted that when a wife has evidence of her husband's atheism, she must resort to the court and ask for divorce.

For his part, Ahmed Ragab Abu al-Azm, assistant adviser to the Grand Mufti of the Republic, said it is the prerogative of a competent religious authority and not the wife to determine whether or not the husband has decided to relinquish his faith and declare atheism.

Azm told Al-Monitor, "In such cases, it is not possible to issue general fatwas on the issue, as each case has its own circumstances. It is the wife's duty to help her husband go to Dar al-Ifta and have a discussion with the sheikhs to make sure of his intention to leave Islam."

On the legal level, Mukhtar Thabet, a lawyer for personal affairs, told Al-Monitor, "The Egyptian Personal Status Law provides for the annulment of the marriage contract in case the husband declares himself an atheist and the court would rule in favor of separation. However, spouses face many hardships in the separation procedures, as divorce cases require legal evidence in order to have a rule in their favor, while getting to keep the prepaid and deferred dowry."

"In cases of atheism it is difficult to have conclusive legal evidence, as the wife would notice a change in his habits that suggest he had left his faith, which is difficult to prove before the court," he added.

Thabet further said, "In case it was difficult to prove that her husband has become atheist, the wife has to file for separation, giving up the dowry and alimony."