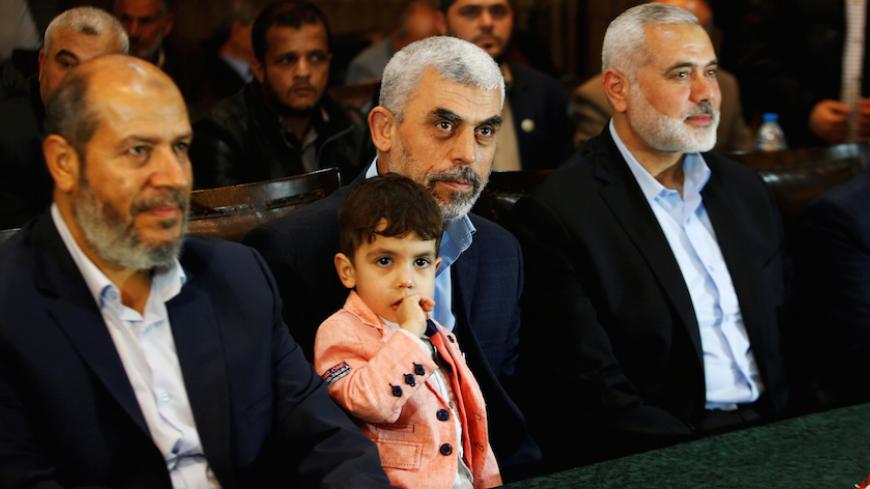 On May 1, then-head of Hamas’ political bureau Khaled Meshaal announced the movement’s new General Principles and Policies Document during a press conference held at the Sheraton Hotel in Doha, in the presence of Hamas leaders as well as Palestinian and Arab media and political figures.

The document included 42 items, most notably, a definition of the movement and an official statement that it accepts a Palestinian state based on the 1967 borders, without relinquishing the rest of the territories occupied in 1948. In addition, Hamas presented itself as a movement of liberation and Palestinian national resistance, without mentioning the Muslim Brotherhood as its organizational and ideological authority.

On May 5, Quds Press cited Meshaal as saying that Hamas’ new policy comforts its allies, namely Turkey, Qatar and some countries and parties around the world, as it is easier for them to convey this document to all regional and international forums. This is because Hamas softened some of its positions in the document, namely accepting a Palestinian state based on the 1967 borders.

At a conference on Palestine held in Istanbul on May 8, Turkish President Recep Tayyip Erdogan described the document as an important step both for the Palestinian cause and for the reconciliation between Hamas and Fatah. He said that the only way to resolve the Palestinian-Israeli conflict is to establish an independent Palestinian state with East Jerusalem as its capital, based on the 1967 borders.

Hamas leader Sami Khater told Al-Monitor that the new policy document took four years to prepare with the help and approval of the movement’s Shura and executive institutions. It reflects the evolution of Hamas’ ideology and political performance that had prevailed for over 30 years, he added.

Khater further stressed that the new policy document represents a road map for the new Hamas leadership, noting that its general objective is to express the movement’s principles and policies.

Hamas has only issued one document since its founding in 1988, the Hamas Charter, which included the movement’s positions regarding various political, social and religious issues. No other document had been issued before this new policy document.

He clarified that this document was in no way related to Hamas proposing itself as an alternative to Fatah or the Palestine Liberation Organization (PLO) to lead the Palestinian national project. He noted that it was only normal for officials and people to react to the document at the local, regional and international levels, namely Israeli Prime Minister Benjamin Netanyahu.

In a video published May 7 by spokesman Ofir Gendelman, Netanyahu expressed his anger at the document, which he crumpled up and threw in a garbage bin, saying this document was Hamas’ way to trick the entire world while it seeks to establish a Palestinian state based on the 1967 borders, in order to destroy the State of Israel.

On May 2, Anadolu Agency quoted an anonymous source from the US State Department as saying, “Hamas’ position has not changed. It is still listed as a terrorist organization.” Meanwhile, chairman of the Delegation for European Parliamentary Relations with Palestine, Neoklis Sylikiotis, told Anadolu on May 4 that the change in Hamas’ position will help lift the siege that has led to catastrophic conditions in Gaza, adding, “We must end the siege.”

Ahmed Yousef, the former political adviser to Gazan Prime Minister Ismail Haniyeh, said that the new Hamas document provides a vision that embodies the humanitarian, cultural and moral dimension of a national liberation movement with an Islamic background. He pointed out that the international and regional changes, as well as the movement's loss of allies, such as Syria, during the last decade, made it imperative for Hamas to present a new political vision aimed at restoring those relationships and gaining new allies.

Yousef told Al-Monitor that due to European and Western laws that placed Hamas on terror lists, the movement needs to make great efforts to promote this new document around the world to rid its reputation of all charges that led to its addition to such lists.

Yousef pointed out that ever since Hamas won the 2006 parliamentary elections, its political discourse overshadowed its religious one, which was reflected in the movement's behavior and allowed it to gain political experience. All this eventually led it to draft a policy document that goes in line with regional and international changes in order to save the Palestinian cause and place it under the spotlight again.

Akram Atallah, a political analyst and writer for al-Ayyam local newspaper, told Al-Monitor that Hamas’ new policy document should help the movement become more accepted in many countries, especially Western ones. He added that Hamas has moved on from the ideology it adopted in its old document, such as affiliating itself with the Brotherhood and using many Quranic verses to explain its positions, and turned the religious aspect into a purely political one.

He pointed out that world countries require more of Hamas in order to make it part of the international system, and this new policy document is a suitable foundation for many countries to open a dialogue with the movement and pressure it into showing more flexibility. Atallah further noted that the document will help Hamas open some doors that were once shut, but not all of them, referring to the United States and other major countries.

Atallah welcomed Haniyeh's election on May 6 as the head of Hamas’ political bureau, saying, “A new document requires a new leadership that can promote this new policy both regionally and internationally, so the movement can survive under the hostility of some Western countries, mainly the US, toward the organizations of political Islam in the Arab region.”

Speaking to Al-Monitor, professor of international relations at the Islamic University in Gaza Tayseer Muheisen said it is too early to know whether the new policy document will make a qualitative shift in the way the international community and the Western countries deal with Hamas.

Muheisen noted that the preliminary reactions from Western and European countries indicate that despite Hamas’ attempts to show flexibility, the international community is still asking for more, which requires a focused, diplomatic campaign on Hamas’ part to properly promote the new policy document around the world.

The next few months will reveal to what extent Hamas’ new document and new leadership are able to achieve the movement’s goals, amid Palestinian expectations that this document could open some closed doors.