How Hamas plans to rebrand internationally

It is thought that a policy document being finalized by Hamas will reflect a new flexibility in the movement's policies and perspectives. 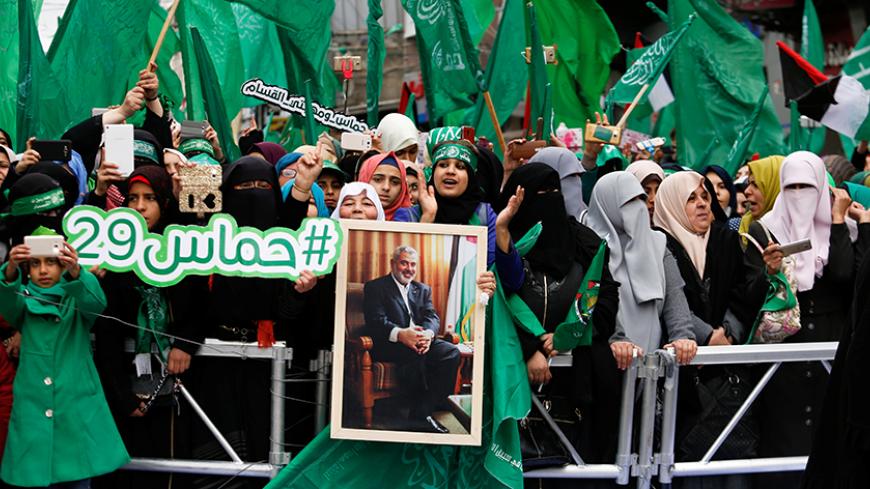 Palestinian Hamas supporters shout slogans during a rally marking the 29th anniversary of the founding of the Hamas movement, in Gaza City, Gaza, Dec. 14, 2016. - REUTERS/Suhaib Salem

With Hamas expected to hold elections in the coming weeks to select new leaders, media attention has turned to the movement releasing a new policy document in the near future that will reflect its current stance toward political events and lay out a road map for its foreign relations. Al-Monitor shed light on the document's development last October, but it remains unclear to observers — and is thought to be a topic of debate within Hamas — whether it is simply a policy statement or an amendment of Hamas’ founding principles laid out in its 1988 charter.

Sami Khater, a member of Hamas' political bureau, told Al-Monitor, “The policy document reflects Hamas' orientation 30 years after its inception, in 1987. It does not constitute a review of its positions on the liberation of Palestinian territories, although it shows flexibility in terms of the conflict with the Israeli occupation. It stresses that [Hamas] is a national Palestinian movement that has its own institutions and makes decisions that are not dictated by any foreign party. The document affirms that Islam is its ideological reference and is an expression of Hamas’ political and intellectual maturity.”

Hamas may be trying to redefine itself via the document. A Hamas Shura Council member based abroad and speaking on the condition of anonymity told Al-Monitor, “The document employs toned-down language designed to break [the movement] out of its international isolation. It is still unclear how the document is going to define ties between Hamas and the Muslim Brotherhood. The regional circumstances may not be favorable for Hamas to remain within the Brotherhood's sphere, which has hindered its ties with Arab parties who have designated the Brotherhood a terrorist group, such as Egypt. The document may avoid addressing organizational ties between Hamas and the Brotherhood, which were explicitly stated in the Hamas charter.”

Osama Amer, a Palestinian political writer based in Egypt who is familiar with the document through leaks, told Al-Monitor, “The Hamas document reflects a shift in dealing with dossiers that have changed since the charter was issued in the 1980s. Hamas must find new means to deal with the new reality, such as agreeing on the establishment of a Palestinian state within the 1967 borders, affirming that the conflict with Israel is a conflict with an occupying power, not with the Jews as adherents of a religion. Although the charter confirms that Hamas is a branch of the Brotherhood, limiting the movement’s activity to Palestine will assuage countries facing tense relations with Hamas, since [the movement] is closely linked to the Brotherhood at the ideological level only.”

Whereas Hamas’ 1988 covenant recognizes a paramount battle between Palestinians and the Jews, the new document distinguishes among Jews by making it clear that Hamas' disagreement is with the Israeli occupation only, and “Jews outside Palestine” are not a target or perceived as hostile. Hamas sources who requested anonymity told Al-Monitor that the term “Jews” will be replaced with the term “occupation,” so Israel cannot accuse it of anti-Semitism. A Hamas scholar who declined to be identified expressed his reservations on this change, however, arguing that the Jews, not Israelis or Zionists, are referenced in the Quran.

Raed Enairat, a professor of political science at An-Najah National University in Nablus and head of the Contemporary Center for Studies and Policy Analysis, told Al-Monitor that based on what he had gather from leaks, “The Hamas document is not a ticket for Hamas to join the international community, but it is perhaps a step on the path toward breaking out of its isolation. Before allowing Hamas access to its ranks, the international community will have basic demands, such as Hamas recognizing Israel. This would mean that it is still too early for Hamas to replace the Palestine Liberation Organization as the representative of the Palestinian people in regional and international forums and that the document will not speed up this process.”

Also based on leaks about the document, Haaretz correspondent Jack Khoury wrote March 8 that it will stress that peaceful popular struggle against Israel is a legitimate approach, along with armed struggle, a move that could facilitate the movement’s contacts with the international community.

In a March 15 article for the Arabi 21 website, Jordanian political writer Majed Abu Dyak wrote that he had obtained a copy of the document that includes Hamas agreeing to the establishment of a Palestinian state within the 1967 borders as an interim solution to the conflict with Israel, but without acknowledging the legitimacy of Israeli sovereignty over the land of historic Palestine (that is, recognizing Israel) or waiving refugees’ right to return. If accurate, it would appear that Hamas' end goal remains Palestinian rule over all of pre-1948 Palestine.

A senior Hamas leader who requested anonymity revealed some procedural details to Al-Monitor, stating, “Hamas began work on the document two years ago. The document has been submitted to the movement’s governing bodies, the political bureau and Shura Council. Legal and political parties inside Hamas are currently editing the document and translating it from Arabic into French and English. Hamas’ current head, Khaled Meshaal, will be presenting the document in late March or early April.”

Hamas seems to be issuing the policy statement more in response to questions raised abroad than to those by Palestinians. This is perhaps because statements by its leaders have failed to provide sufficient and credible answers to questions or because some of its regional allies, such as Turkey and Qatar, are unable to adequately defend it or its positions as the movement would like. Thus, it became necessary for Hamas itself to clarify the movement’s political position and outlook.

Ahmed Yousef, political adviser to Ismail Haniyeh, deputy chairman of Hamas' political bureau, and head of the House of Wisdom Institute for Conflict Resolution and Governance in Gaza, told Al-Monitor, “The document will constitute a reference for Hamas’ political rhetoric, a basis for representing the strategy behind its actions and a road map confirming its positions in the conflict with the occupation. It also spells out Hamas' relations with the international community. A part of the document is strategic and realistic [in accepting the establishment of a Palestinian state within the 1967 borders]. This would advance the Palestinian national consensus, be in line with international law and counter international bodies’ complaints about the charter, which Israel has taken advantage of to incite against the movement and claim that it is hostile to the Jews.”

The release of the policy document after various capitals, among them Cairo and Amman, slammed the door in the movement’s face is perhaps not coincidental. It would also not be unreasonable to suggest that 30 years after the movement's inception, Hamas simply recognizes that new positions and policies are required to address political and economic developments and current regional tensions and ties.