What's next for Hamas?

After the Muslim Brotherhood in Jordan formally dissociated itself from the mother organization in Egypt, eyes are turning to Hamas for its reaction. 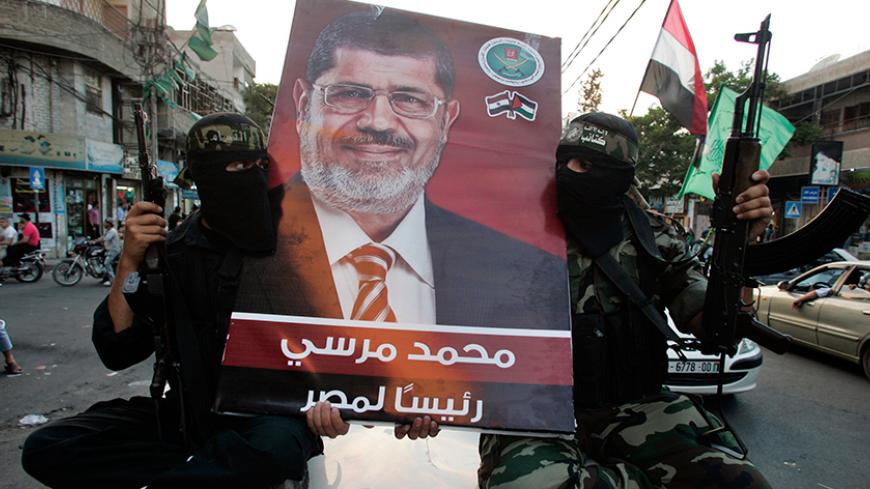 Hamas militants hold a poster depicting Mohammed Morsi of the Muslim Brotherhood as they celebrate in the street in Gaza City after he was declared Egypt's first democratic president, June 24, 2012.

Hamas, which has controlled the Gaza Strip since mid-2007, has seen its relationship with Egypt go up and down. But the golden age of the relationship between the two sides was during the rule of the Muslim Brotherhood. That rule ended with the removal of President Mohammed Morsi from power in June 2013. Hamas’ relationship with Egypt has been tense ever since, with constant Egyptian incitement against it.

The move by Jordan’s Muslim Brotherhood resonated with some Brotherhood leaders in Palestine and revived discussion of the need to change Hamas’ charter, which some see as out of date and in need of substantial changes. It explicitly states in Article 2 that the Islamic resistance movement, Hamas, is a wing of the Muslim Brotherhood.

There are disagreements within the group about the causes and motivations behind the Jordanian Muslim Brotherhood's decision to amend its charter and dissociate from Egypt’s Brotherhood.

Regarding the reasons and timing of this amendment, Adaileh was reported as saying, "This amendment is a formality. This definition has existed since the founding of the group in Jordan in 1945. This amendment has been on the group's agenda for three years, but disagreements within the group prevented its supporters from reaching a majority within the Shura Council, as the decision requires the approval of two-thirds of the council's 53 members."

A Hamas official told Al-Monitor on condition of anonymity that there had been a lot of talk about the need to amend some of the charter’s articles after certain political developments in the region as well as the practical change that took place in Hamas’ political philosophy — namely the movement’s relations with regional and international institutions — since its inception in 1987.

The source said, "For years, there has been talk within the movement’s corridors and institutions on amending some of the movement’s charter but this talk had not reached the level of real change because the conditions were not suitable.”

He noted that the Muslim Brotherhood organization in each country has its own specificities and independent decision-making, and that the relationships among the various organizations across countries are about coordination and solidarity but not about policy or events on the ground.

Walid al-Mudallal, a professor of political history at the Islamic University in Gaza, explained that the decision by Jordan’s Muslim Brotherhood was just a formality, not a practical step, and came as a result of pressure and accusations that the Muslim Brotherhood is a cross-border organization.

Hamas felt that the Arab Spring revolutions will spread, that its allies represented by the Brotherhood or political Islam had won and that the Arab revolutions and the arrival of Islamists to power will lead to recognizing Hamas as a key player in the Arab region and the Palestinian arena.

The Hamas official added, “Some leaders within the movement wish to bring about change, especially after the collapse of the Islamist regimes in the Arab world, but this change requires a major effort and may not happen at the moment. Hamas may need something in return for it to change, including its affiliation with the Muslim Brotherhood. No Arab regime is able to provide this concession for the time being because of the global and regional political conditions and Hamas' position on the conflict with Israel."

Ibrahim al-Madhoun, who writes for the Hamas-affiliated Al-Resalah newspaper in Gaza, said that Jordan’s Brotherhood dissociating from the mother group in Egypt will have little impact on Hamas. He added that Hamas does not follow the Muslim Brotherhood but has only a formal link to it.

It seems that Hamas is not about to announce any fundamental change in its ideology or links to the Muslim Brotherhood because it believes the region is in crisis and would thus prefer to wait until these crises are resolved and choices have been made.