The Shura Council of Jordan’s Muslim Brotherhood has decided to revoke the membership of 10 leading members belonging to the Zamzam Initiative, a group that seeks to break ties with Egypt’s Brotherhood. 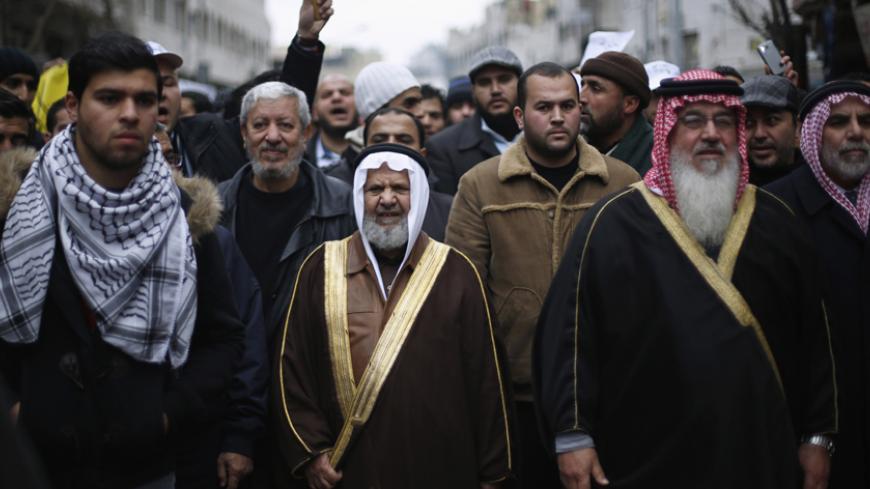 Jordan’s Muslim Brotherhood, the largest Islamist organization in the kingdom, is facing the biggest crisis in its 70 years of existence. On Feb. 14, the group’s Shura Council, the highest body in the organization, voted to terminate the membership of 10 leading members, including former overseer Abdul Majid Thuneibat, for “violating the basic law of the group,” creating an internal rift within the Brotherhood.

According to a statement by the organization, “a number of members collected signatures and met with government officials to seek a new license” in the name of the Muslim Brotherhood in Jordan. Most of those whose membership was revoked belong to the so-called Zamzam Initiative, a reformist movement within the group that wants to sever the Muslim Brotherhood’s ties to Egypt. Most were threatened with suspension last year for violating the group’s internal laws, but the decision of the Shura Council is final.

In 1953, the group was first registered as a charitable organization with the ministry and formed a political party, the Islamic Action Front, ​in 1992. On Feb. 26, the Cabinet decided to refer the Muslim Brotherhood case and the new application for its licensing to the Ministry of Social Development for evaluation. Anonymous sources told Al-Monitor that the group’s top leadership had requested a meeting with Prime Minister Abdullah Ensour to discuss the issue of re-licensing, but no date has been set for such a meeting.

Minister of Political Development Khaled al-Kalaldeh was quoted in the media as saying that the government “had no intention to interfere in the current fracture within the group,” but added, “Licensing it as a political body requires that it first disengages from the international organization of the Muslim Brotherhood.” Speaking to Al-Monitor later, Kalaldeh refused to comment on the issue, saying only, “The case of the Muslim Brotherhood and its licensing remains unclear.”

On Feb. 19, 27 leading figures issued a statement in which they rejected the Shura Council decision describing it as “unjust and invalid.” They said the decision was not based on the basic law of the group and that they will continue to work with “Sheikh Thuneibat, who is a symbol of the group’s leadership.”

On his part, Thuneibat told Al-Monitor that the group was first licensed “as a society” in 1945 as a branch of the Muslim Brotherhood in Egypt. That status was changed to "group" in 1953, but without severing relations with the Egyptian organization, he said.

He admitted that he had asked the government to re-license the group “and form a new transitional legal and Jordanian leadership.” Thuneibat said that because the group was banned in Egypt and associated with terrorism, the status of the Jordanian branch is now in question. The former overseer said that he asked the current leadership to “correct our status and revise the basic law, but they ignored our request,” adding, “The Muslim Brotherhood must become Jordanian and fall under Jordanian law, but currently there is no official oversight.”

On the possible outcome of his request for re-licensing, Thuneibat said, “The present group may be disbanded and deemed illegal as a branch of the Egyptian organization, or it might be integrated into the new group.”

The current leadership of the Muslim Brotherhood is described as conservative and hawkish by observers. The main purpose of the reformists behind the Zamzam Initiative is to sever the group’s relationship with outside parties such as Hamas in the Gaza Strip and the international Brotherhood organization.

Irhail al-Gharaibeh, one of the founders of the Zamzam Initiative and whose membership was also revoked, wrote in Addustour Feb. 26 that the group faces two parallel projects today. “One concerns Jordan as a country, people, system and institutions that functions inside Jordan under Jordanian law and national legitimacy and within the framework of the state.” The other, he wrote, “concerns Palestine under a different vision, leadership and plan and has its own targets and means to achieve them.”

Gharaibeh added that the two projects cannot be mixed and “those who believe in the Jordanian state and belong to it must become part of the Jordanian national project regardless of their origin and background.” Observers believe the current spat revolves around the repositioning of the Muslim Brotherhood and its objectives. Some have described it as an attempt to “Jordanize” the group.

But even leading moderate members of the group have criticized Thuneibat’s latest move to re-license the Muslim Brotherhood. Abdel Latif Arabiyat told Al-Monitor that the drive to “correct the status of the group is misleading.” He said that the group “has a clear and comprehensive license that has nothing to do with the Egyptian organization.” Still, he is against the firing of Thuneibat and others and believes the group can work out its challenges internally.

Political analyst Ibrahim Gharaibeh told Al-Monitor that the basic law of the group is “unpublicized,” and so are its finances and membership regulations. “The group is managed away from official oversight, such as elections, and there are no legal structures for appeal and no audited financial report,” he said. “Women cannot become members, nor have they the right to vote. And there is the problem of the relationship with Cairo, where all groups are considered branches of the mother organization.”

Columnist Majed Toubeh said that the real issue is not the legal status of the group, but the role of the Muslim Brotherhood in Jordanian political life. He told Al-Monitor that the legality of the group was never an issue for over six decades. “What it’s all about today is the internal crisis within the group and its future role. It is the struggle between various flanks that will decide the fate of the group,” he said.

Expert on Islamist movements Mohammad Abu Rumman said that while he supports the internal restructuring of the group in Jordan, “it should be an internal decision that separates the political and the religious,” pointing to the experience of Morocco’s branch of the Muslim Brotherhood. “The current leadership should be pragmatic while the reformists must tread carefully, but the state should understand the repercussions of weakening the Islamists now, which serves no political or social purpose,” Abu Rumman said.

The internal rift is widening in spite of calls for dialogue, and the government’s decision will be decisive over the fate of Jordan’s oldest political movement.