The recent resignations within Jordan’s Muslim Brotherhood threaten further fragmentation within the group unless serious reforms are carried out. 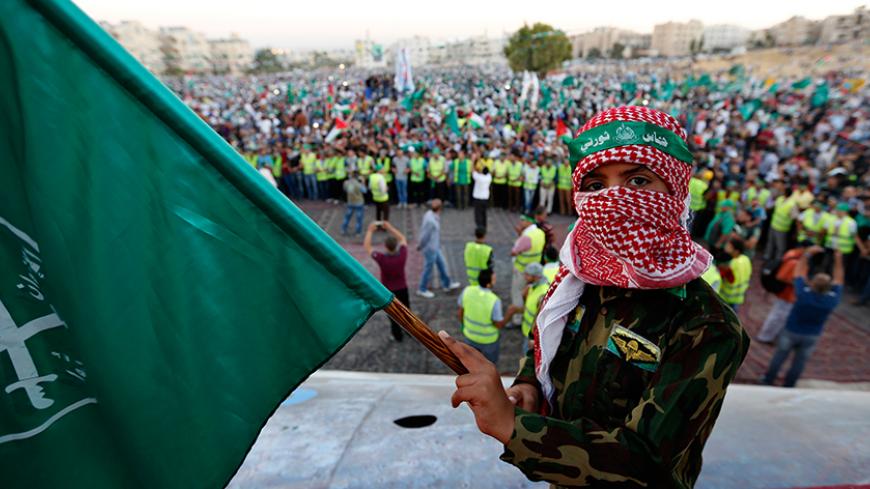 A boy holds a Muslim Brotherhood flag during a rally in Amman, Aug. 8, 2014. - REUTERS/Muhammad Hamed

Jordan’s Muslim Brotherhood and its political arm, the Islamic Action Front (IAF), face unprecedented challenges after prominent members and mid- and low-level cadres tendered resignations from the party during the last week of December. On Dec. 28, about 400 members, including veteran members and founding leaders, resigned from the party. Other resignations followed as the Consultative (Shura) Council of the IAF attacked defectors and refused to admit that the 70-year-old group is going through a serious crisis.

The Brotherhood's predicament began in 2013 when members — mostly from the East Bank of the kingdom — launched on Oct. 5, 2013, what became known as the Zamzam Initiative. They called for massive structural reforms while demanding disengagement from the international body of the Muslim Brotherhood — established in Egypt in March 1928 — and participation in the country’s political life.

The Brotherhood had boycotted legislative elections in Jordan, the most recent in 2013, in protest of the election law, which they saw as working against them. In addition, Zamzam participants accused the current leadership of the Brotherhood of intransigence and of loyalties that go beyond the borders of the kingdom. When their initiative was rebuffed, their leaders were ousted from the Brotherhood, but they remained in the IAF until they joined others in resigning on Dec. 28. Now those behind Zamzam are considering establishing their own political party.

In March 2015, another faction — led by former general overseer Abdul Majeed Thneibat — defected and applied for a license under the name of the Muslim Brotherhood Society (MBS). The government approved their request and said that the Brotherhood had never officially registered with the government, casting doubts over its legality. Attempts by the MBS to claim the group’s material assets, including its properties, were later rejected by court.

To add to the Brotherhood’s deepening crisis, a number of veteran members of the IAF, later named the Group of Elders, threatened to resign from the party on Dec. 29, citing internal problems and irreconcilable differences with the Brotherhood’s leadership, which has control over the IAF’s affairs and policies.

Prominent Brotherhood leader and former head of the IAF’s Shura Council Abdel Latif Arabiyat, who is also one of the Group of Elders, said that internal reforms of the IAF’s election bylaws had come a long way, but there are “parties that want to divide us in order to reach leadership positions.”

He told Al-Monitor, “There is recognition that the Muslim Brotherhood is going through a crisis, but in return there are many initiatives that aim at reconciliation, unity and reforms [launched by the moderates within the Brotherhood].”

Arabiyat added that one of the controversial issues is IAF elections, “which usually result in polarizations and divisions.” He said that he has suspended a decision to resign from the IAF, hoping that compromises will be reached soon.

“Meanwhile the group and the party will remain even if I was the only member,” he said.

But the leader of the Zamzam Initiative, Rahil Gharaibeh, disagreed. He told Al-Monitor that the Brotherhood had faced challenges before, “but today it is actually collapsing because of the intransigence of some leaders [namely the general overseer, Hammam Said] who are loyal to persons rather than ideas.”

He said that the recent mass resignations are proof that members had no other options since the path to dialogue has been closed.

“The root cause of the divisions is demographic since Hamas [the Palestinian movement in Gaza] penetrated the group in Jordan for many years and forced its own agenda,” Gharaibeh said.

“Eventually the group will have to evolve and decide where its true loyalties lie,” he added.

Islamist writer Hussein al-Rawashdeh is convinced that the Brotherhood will break down, “producing various currents and fragments.” He told Al-Monitor that the main group will lose its significance while Zamzam and the Group of Elders are likely to form a new Islamist party that will compete with the IAF.

“The IAF will remain, but it will continue to go through more defections,” Rawashdeh said. “Eventually there will be a separation between the clerical and the political within the group while the [Muslim Brotherhood] Society will continue to lack popular support,” he said.

Islamist commentator Hilmi al-Asmar criticized the Brotherhood’s system of “blind submission to the leadership,” which in his view is “archaic and nondemocratic” and has been undermined by “deep changes that have taken place in human society including the revolution of social media.”

He told Al-Monitor that the Brotherhood has failed to appreciate the repercussions of the “tremor-like event in the form of the big setback that the organization suffered in Egypt [in 2013], which has exposed major flaws in the way the group functions and its relationship with the party, which is its political arm.”

Asmar said that Jordan’s Brotherhood has adopted the Egyptian system, where the party lacks independence and is treated as an extension of the Muslim Brotherhood. “The duality of the ‘party and the jamaa’ [group] made these parties ineffective while putting the historic leaderships in front of difficult choices as young members drifted toward extreme dogmas,” he said.

But he warned the government of the price of fighting political Islam because “any weakening of moderate Islamists will benefit the takfiri [those who accuse other Muslims of being apostates] groups, which will come at the expense of regimes and people alike.”

The current leadership of the Brotherhood has evaded calls for carrying out internal reforms. Political analyst Orieb al-Rintawi accused them of going through “a state of denial.” In his piece in Addustour daily on Jan. 3, he wrote that current Brotherhood general overseer Said has refused to resign even after three major breakaways that have rattled the group and its political party.

“The group has failed to keep pace with major regional development, and its submission system of obeying the leadership is undemocratic,” he wrote.

“Furthermore, it has failed to examine the Islamist experiment in Tunisia and Morocco and ignored the lessons of the debunked Egyptian experience,” Rintawi added. He was referring to the relative success in both countries by Islamist parties in forming governments and engaging in politics.

In his view, the Brotherhood was unable to separate between "playing” politics and proselytizing (dawa) — the latter being a cornerstone of the group’s objective for a slow “Islamization” of society.

In addition to this, Rintawi wrote that the Brotherhood has failed to distinguish itself as a “nationalist” movement concerned with local issues away from the general concepts of the “umma” (nation) and “caliphate.”

There are signs that last-minute attempts will be made to preserve the unity of the IAF and, by extension, the Brotherhood. On Jan. 5, the IAF’s Shura Council announced that it had started discussions over regulations to allow members of the general assembly to take part in the secretary-general’s election, scheduled for March of this year, and increase the participation of women and young members through a quota system.

The deputy general overseer of Jordan's Brotherhood, Zaki Bani Arshid, announced that he was about to launch a new reform initiative of the group with the aim of ending internal rifts. Bani Arshid was speaking on the day of his release, Jan. 4, from prison after serving 18 months for publishing a comment on his Facebook page that was deemed to hurt Jordan’s relationship with the United Arab Emirates. He had criticized the UAE’s campaign against Muslim Brotherhood activities there.

Bani Arshid is a rising star inside Jordan's Brotherhood, and while he is considered a hard-liner, he still carries influence with moderate members. His initiative may be a last ditch attempt to save the Brotherhood from further fragmentation.