Will Jordan ban the Muslim Brotherhood?

Tensions between Jordan’s Muslim Brotherhood and the government flare up as Jordan’s government closes an MBG office and prevents the group from holding internal elections. 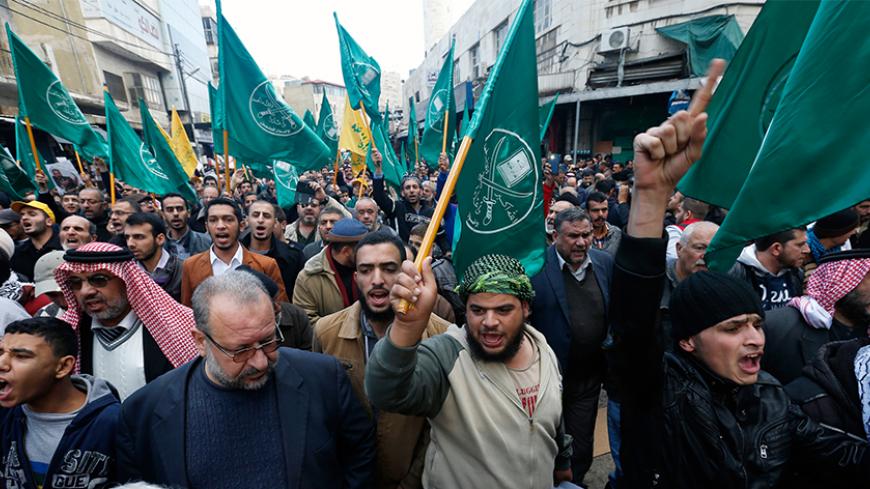 Protesters from the Islamic Action Front wave their party flags during a demonstration after the Friday prayer in Amman, Nov. 28, 2014. - REUTERS/Muhammad Hamed

Two incidents in March have heightened tensions between Jordan’s Muslim Brotherhood Group (MBG) and the government to the point of raising speculation about the future of the 70-year-old Islamist movement.

In the first incident, the Islamic Action Front (IAF), the MBG's political arm, received notice March 13 from the governor of Aqaba ordering the closure of its office in that port city to comply with a court order. The closure was based on a complaint by the Muslim Brotherhood Society (MBS), an offshoot founded last year by disaffected MBG members, regarding a legal dispute over ownership of the property. It is the first time the IAF has been involved in a dispute between the MBG and the MBS.

Following the MBS' registration in March 2015, the government asserted that the MBG lacked legal registration. It was therefore prevented from holding public rallies and other events. The MBG insisted that it has had a known legal presence since its establishment in the 1940s. In the second incident, on March 31, the governor of Amman informed MBG officials that because their group was not officially registered, they were prohibited from holding internal elections to select Shura Council members and a general overseer.

It remains unclear whether the government is moving closer to banning the MBG or whether it is forcing it to limit its activities to the IAF, which has been officially registered as a political party since 1992. The government's actions follow parliament’s adoption in March of a new election law, which all Islamist parties in the kingdom had welcomed. The IAF boycotted the 2013 local elections to protest the one-person, one-vote electoral system, which had been in place for decades and has been removed in the new law. Under the old law, voters could only cast their ballot for a single candidate, even if there were multiple parliamentary seats available in their district. Now a voter can cast a number of votes equal to the number of available seats in his district.

Khaled al-Kalaldeh, Jordan's minister of political development, denies that the government is considering banning the MBG. He told Al-Monitor, “The government is dealing with this issue with restraint knowing the weight of the group and its party on the popular political scene.” Kalaldeh admitted, however, that there might be pressure from certain political centers inside the government that want a confrontation in light of recent divisions within the Islamist movement.

He also emphasized that forbidding the MBG to hold internal elections is based on the legal complaint made by the registered MBS, which has claimed that the MBG is illegally using its name. “The fact is that the [MBG] is not a legal entity, and this has nothing to do with any government position,” Kalaldeh asserted.

The MBG has been struggling with internal divisions for years. In 2013, a group of moderate members calling for bold reforms launched what became the Zamzam Initiative. They opposed the movement’s decision to boycott elections and wanted the MBG to sever its historical ties to the main group in Egypt. In addition, they called on the MBG to focus on national issues and to act as an opposition in the political system. Having been repeatedly rebuffed by the hawkish leadership of the MBG, the members behind Zamzam, who were later expelled from the MBG, decided to form their own movement. On March 26, the Zamzam leadership unveiled plans to establish their own political party to contest legislative elections expected to be held later this year.

Irhail al-Gharaibeh, general coordinator for the Zamzam Initiative, told Al-Monitor that he expects the government to dissolve the MBG, because it is not registered in Jordan, and defended the decision to prevent the group from holding internal elections. “It has no legal structure, and if the group insists on holding elections, then the authorities must intervene and take action,” Gharaibeh said.

According to Gharaibeh, the divisions within the MBG are long-standing, but they resurfaced following the events of the Arab Spring. “We wanted to have flexibility in political action and to avoid the mistakes of the past,” he said. “But the conservatives rejected our efforts, and we as reformers had to take action through what we call conciliatory democracy.”

Gharaibeh warned that the Islamist movement in Jordan could collapse if it fails to adapt and that it should break from its ideological trenches and accept competition based on merit rather than tribe. He reiterated the decision by the Zamzam Initiative to contest future elections as a moderate Islamist party.

Ali Abu al-Sukkar, former chairman of the MBG’s Shura Council, dismissed speculation that the government's recent decisions might eventually lead to banning the group. “Practically and historically, we had a good working relationship with governments, and we were never extreme in our policies,” he told Al-Monitor.

Abu al-Sukkar described the present relationship as tepid, but said it would never result in a total break. “The rise of the Islamist movement in the region has raised fears here, and the presence of Daesh [the Islamic State] has created a fear of Islamist parties,” he said. Abu al-Sukkar also said the MBG will hold its internal elections before the end of this month, regardless of the government's position.

Meanwhile, the MBS has announced its intention to participate in this year's parliamentary elections, but has not yet filed for a political party license. On April 3, its Shura Council adopted a unanimous decision to end years of political boycott, which began with the 2013 IAF election boycott.

The fragmentation of the Islamist movement is already having an effect on society. On March 30, the Teachers Association, the largest professional union in Jordan, held general elections and the results clearly revealed the MBGs waning popularity. The group's candidates lost ground to independents, who won 56% of the seats on the union's central committee.

These results will be used by MBG critics to point to its exaggerated influence on the Jordanian electorate. The real test, however, will be how the IAF performs in legislative elections in competition against the two new planned Islamist parties. Meanwhile, as the government’s legal siege against the MBG continues, the group's big showdown, its internal elections, awaits the end of this month.