Four Islamist parties will be competing in Jordanian legislative elections, including the Muslim Brotherhood and its splinter movements. 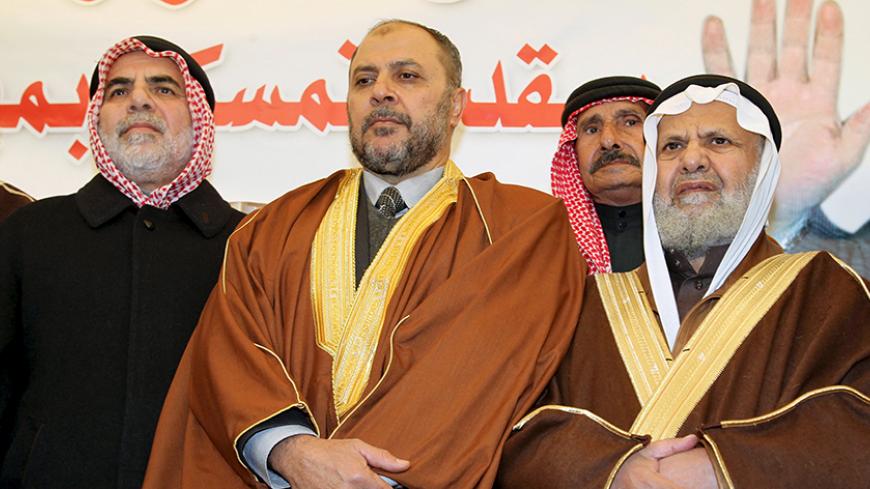 Zaki Bani Ersheid (C), deputy Secretary General of the Muslim Brotherhood, is received by supporters after his release from prison in Amman, Jordan, Jan. 4, 2016. - REUTERS/Majed Jaber

These days, one dominant question has Amman’s political salons buzzing: How will Islamists fare in the upcoming legislative elections? There is a very good reason for this.

The elections scheduled for Sept. 20 will see four Islamist parties and alliances competing for places in the 130-seat Lower House. All eyes, including those of the government, will be fixed on the performance of one particular group — the long-established, unlicensed Muslim Brotherhood Group (MBG), which has decided to contest the elections after boycotting the last two, in 2013 and 2010. The group had sat out the previous elections because it opposed the single-vote system and to protest alleged government meddling in the results of elections in 2007.

The MBG’s decision to participate in this year’s balloting comes in the wake of a number of incidents that have tested the 70-year-old movement. Over the last three years, the group has experienced internal divisions, government harassment and rebellions against its hardline leadership that led to defections and the creation of two splinter movements: the Muslim Brotherhood Society (MBS), which the government then recognized as the MBG's legitimate replacement, and the Zamzam Initiative, which later became a political party. The two splinter groups have decided to contest this year’s elections, as will the Muslim Center Party (al-Wasat), a moderate Islamist party that had representatives in the previous legislature.

The MBG’s decision to end its boycott followed the passage in March of a new election law that ended decades of the single-vote system and replaced it with an open, proportional list scheme that ostensibly aims to encourage the formation of blocs and alliances, especially among the kingdom’s more than 50 licensed political parties. The government claims that the new law will also override the role of political money, that is, vote buying, and promote competition on the basis of programs instead of personalities. It is a cumbersome law that baffles voters and candidates alike.

Critics have argued that the statute is designed to limit the number of Islamist candidates in the Lower House and prevent a repeat of the 1989 elections, when MBG candidates won almost a third of the 80 seats. By Aug. 18, 230 lists had been registered, comprising 1,293 candidates. Each list must contain a number of candidates equal to the number of seats being contested in each district, but voters are not obliged to vote for an entire list.

A temporary MBG leadership has decided to try a new and daring approach, instead of running their candidates through the organization's political arm, the Islamic Action Front (IAF). Last month, the IAF formed the National Alliance for Reform (NAR), which is non-partisan and consists of second-tier IAF leaders in addition to independent nationalist, tribal, Christian and Circassian figures. In all, they submitted 25 such lists covering most electoral districts, especially in Amman, Zerqa and those with refugee camps. The move has surprised many and led observers to play a guessing game of how many seats the alliance will actually be able to win.

Unlike previous election laws, the new one makes it difficult to predict how blocs and alliances will perform. That said, however, most observers believe Zamzam and the MBS have little chance of winning more than a handful of seats, because they don’t have the grass-roots support that the MBG has cultivated over the decades. On the other hand, they believe that the NAR will win at least 13 seats and could take as many as 25.

What might help the NAR is that it has a committed following, especially in east Amman and the refugee camps, which see the MBG as an underdog. Still, one poll in July, conducted by the local nongovernmental organization Rassed, suggested that only 31% of eligible voters, about 4 million, will turn out on election day. Frustration with previous legislatures is to blame for voter apathy.

The MBG’s resort to forming alliances with others has baffled observers. Speaking to Al-Monitor, Samih al-Ma’aytah, former information minister and critic of the MBG, called the group’s alliance strategy “a sign of weakness because those who know it also know that they have never accepted sharing power with any party.” He further explained that the MBG is using tribal and nationalist figures “to carry its own candidates to the Lower House.” Despite this, he said, “Their style of seeking confrontation with the government will not change.” Ma’aytah believes that at best, MBG candidates will win 13 seats. “For them, it’s a way to get over their internal crisis,” he added.

A former overseer of the MBG, Salem al-Falahat, agreed. He also projects that the group’s candidates will take no more than 13 seats. “This is due to the way the electoral districts are designed, where Amman still has a low number of seats compared to other areas where the Islamists do not do well,” he told Al-Monitor.

Falahat said that the MBG’s participation is a victory for the government. “[It] will present this as an achievement for Jordanian democracy, as it gives legitimacy to the electoral process in the kingdom,” he explained.

Hussein al-Rawashdeh, an Islamist newspaper columnist, has been critical of the MBG’s move to contest the elections through non-partisan alliances. “Such an alliance will be short-lived and will test the credibility of the Muslim Brotherhood [MBG] with their new allies,” he told Al-Monitor.

Rawashdeh said the MBG is hoping to prove the government wrong and break the 13-seat barrier by winning “double that figure.” The MBG had no other option but to join the political process, hoping that it will end its internal crisis, he contends.

“But history will not go back, and we should anticipate a new phase where the group [MBG] will disappear and the party [IAF] will remain,” Rawashdeh said. The IAF leadership has been trying to disengage itself from the MBG in a bid to chart an independent political path and attract younger members.

The NAR’s performance on Sept. 20 will remain the main theme of this election. The number of seats it wins will determine whether the government miscalculated by underestimating the MBG’s strength or if the group can make a comeback in spite of the internal divisions it has suffered over the past two years.