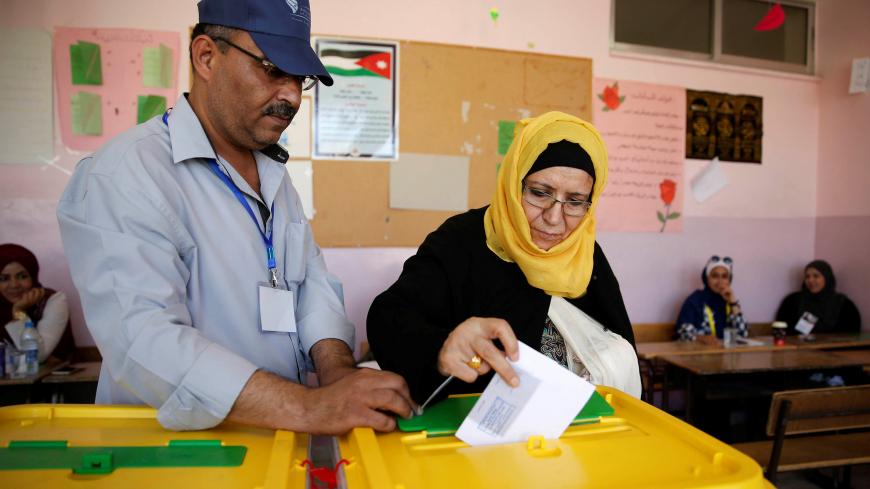 A Jordanian woman casts her ballot at a polling station for local and municipal elections in Amman, Jordan, Aug. 15, 2017. - REUTERS/Muhammad Hamed

In the run-up to municipal and governorate elections on Aug. 15 in Jordan, expectations for nationwide voter turnout were low. In addition to electing members of more than 100 municipalities across the kingdom, voters were asked to select the members of 12 newly formed governorate councils. The aim of the councils is to decentralize government decisions and empower local representatives to plan and approve projects and services at the governorate level. At the end of the day, only 31% of the 4.1 million eligible voters had cast ballots, with the major urban centers of Amman, Zarqa and Irbid experiencing exceptionally low turnout.

The biggest surprise, however, was the unexpected gains made by Islamists. Running under a broad coalition — the National Alliance for Reform — the Islamic Action Front (IAF), the political arm of the Muslim Brotherhood, announced that its candidates had won 76 seats across the kingdom, including the presidency of three municipalities. A prominent IAF figure, Ali Abu al-Sukar, scored a major victory by winning the presidency of the municipal council of Zarqa, Jordan’s second largest city, a largely conservative urban center and a traditional Islamist base.

The Islamist-led coalition also claimed 25 seats in the governorate councils, plus five seats on the coveted Greater Amman Municipality Council. It also announced that 11 women on its lists had won seats. Women voters, said to make up 53% of the voter base, failed to turn out in big numbers, according to the Independent Election Commission (IEC). In Amman, the figure was less than 5%.

The IAF had boycotted previous municipal elections in protest of what it considered to be unfair elections laws. Its breakthrough in the Aug. 15 elections followed years of internal divisions, defections and splits that were thought to have weakened the movement’s base. The same coalition had won 15 out of 130 seats in the September 2016 legislative elections. Ironically, the newly formed Muslim Brotherhood Society (MBS) and other splinter groups were absent from the recent elections, as were most of the kingdom’s political parties.

While most voters in urban centers, especially in affluent West Amman, stayed home, participation was higher in smaller towns and remote governorates. As in previous elections, this year tribal and family affiliations and candidates with cash to spend determined the outcome. While a number of monitors said the elections were free and fair, a nongovernmental elections-monitoring body, Rased, registered more than 500 illegal incidents, including an episode near Amman in which supporters of candidates raided a polling station and destroyed ballot boxes.

In addition to focusing on the strong message that the IAF’s results send, underlining its relevancy and popularity, commentators questioned the continued absence of strong political parties in Jordanian politics and the phenomenon of voter apathy. Writing in Al-Ghad on Aug. 15, the political commentator Muhammad Abu Rumman blamed the government and so-called political elites for failing to explain the Decentralization Law and its contribution to political reforms to the public.

In addition, Abu Rumman raised the question of why residents of West Amman, who are mostly of Palestinian origin, and other urban areas have become indifferent to legislative and local elections. While failing to provide a definitive answer, he suggests that the problem could be related to the state’s message to its citizens in regard to their rights.

Another columnist, Fahd al-Khitan, picked up on the same problem in an Aug. 16 Al-Ghad article. He suggested that the problems of low voter turnout in West Amman, about 20%, while influenced by the capital’s mayor being appointed rather than elected, and major urban centers suffering from an unfair allocation of electoral districts compared to rural areas should be examined from a historical and political context. He added that there is a need to “analyze the behavior of a huge social bloc whose awareness has been shaped by complex factors resulting in what is now called the ‘problem of citizenship’ and specifically the relationship of Jordanian citizens of Palestinian origin to the state.”

It was a bold assessment of an issue that is seldom discussed in public. Khitan went on to pose the question of whether refusing to participate in elections is basically “an act of protest against the state … where a group of people subconsciously sees itself outside the state and its institutions.”

Discussion of the rights of Jordanians of Palestinian origin, who make up at least half of the population, is typically a taboo subject, avoided by both the regime and the political elite. It is considered an issue tied to the outcome of a final settlement between Israel and the Palestinians, with most local politicians preferring to kick the can down the road rather than discuss the problem and its ramifications on Jordan's political reality. The issue has been approached by key figures in the past as a major hurdle in accelerating political reforms in the kingdom.

The Decentralization Law passed in 2015 was supposed to represent a major step in political and economic reforms by devolving powers related to planning public services, approving development projects and exercising oversight of provincial councils. The law has failed, however, to trigger public enthusiasm.

Critics charge that it fell short of empowering local representatives, leaving key powers in the hands of appointed governors. In addition to governorate councils, 75% of whose representatives are elected, the government has created 12 executive councils, headed by appointed governors. The latter are responsible for budgeting and for drafting strategic plans, which have to be approved by the governorate council.

Adding to voter apathy, Jordanians have become increasingly frustrated with the recently elected Lower House, which in their view continues to underperform despite last September’s legislative elections being held under a new multi-vote system that replaced the controversial single-vote law in place for more than a decade. Turnout in those elections was also low, at 37%.

The worsening economy, which has been posting modest growth rates for almost a decade amid rising unemployment and poverty rates, is another reason for growing voter apathy.