Who are the winners and losers in Jordan’s latest elections?

With limited political party participation in parliament and a legislature that is still dominated by monarchy loyalists, many Jordanians believe that little has changed after the recent elections. 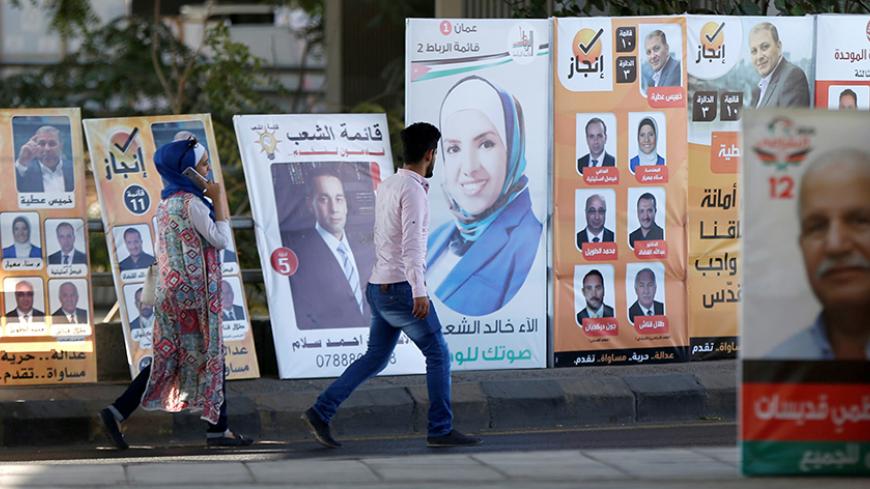 People walk past electoral posters for parliamentary candidates ahead of the general elections that were held on Sept. 20, Amman, Jordan, Sept. 16, 2016. - REUTERS/Muhammad Hamed

The results of Jordan’s legislative elections for the 18th Lower House of parliament, held Sept. 20, was a mixed bag of surprises, disappointments and modest breakthroughs. The elections were held under a new law allowing multiple votes for open proportional lists that replaced the decades-old single-vote system, which has been criticized for years by various political players, especially the Muslim Brotherhood. The Muslim Brotherhood had boycotted the last two elections but decided to contest this year’s poll through its political arm, the Islamic Action Front (IAF). In all, 1,252 candidates ran in 226 lists in the elections.

Managed by an independent commission, the elections were hailed by local and international monitors as mainly free and fair with no government interference, despite incidents that marred the elections process and protests that erupted in many parts of the kingdom following the announcement of results.

So who were the winners and losers in Jordan’s recent elections?

The Muslim Brotherhood, which the government does not recognize as a legitimate entity, contested the elections through an alliance that brought together IAF candidates and tribal, nationalist and Christian figures — the National Coalition for Reform (NCR).

NCR’s program and rallies departed from traditional Brotherhood slogans, especially the famous slogan “Islam is the solution," and offered a civic, nonreligious approach to dealing with the country’s economic and social challenges. In all, the NCR fielded 120 candidates through 20 lists in various districts including Amman, Zerqa, Irbid and Salt.

When the results were announced, they had won 15 seats of the 130-seat Lower House, of which IAF candidates took 10 and the rest went to their allies. There is no doubt that while this makes the NCR the biggest opposition bloc in parliament, the result is a modest one for the Muslim Brotherhood. They had taken 11.5% of the Lower House seats while pre-election predictions gave them between 15 and 20 seats in total.

Overall the 20 lists had gathered 160,000 votes — the majority of which were in Amman, Zerqa and Irbid — or about 11% of total votes cast in the elections. Moreover, five of the seats that the NCR had won were part of the quota system, designated for women, Christians, Circassians and Chechens, which usually receive smaller number of votes. Of these, three seats were taken by women.

It is noteworthy that 50% of the NCR lists failed to win a single seat, and that these lists were mostly competing in southern governorates where tribal influence is dominant. Such results will please the government as they indicate a waning in grass roots support for the Brotherhood while allowing them to be represented in the legislature, ending a decade of boycott.

On the other hand, the newly registered Muslim Brotherhood Society (MBS), which was formed last year, failed to win a single seat. It had contested the elections with one list in Irbid's second district. This dismal performance will focus attention on the future of the MBS and its political viability. The Zamzam Initiative and the Wassat Party each won three seats, and the question now is whether or not their deputies will form a bloc with the NCR.

The election law was criticized by pundits and women's associations for designating three out of 15 seats, dedicated to women under the quota system, to the country’s most populace governorates — Amman, Zerqa and Irbid — raising further questions over gerrymandering imbalance that favored tribal districts at the expense of the capital, where half of the eligible voters, more than 4 million in total, live. Still, five women were able to compete and win outside the quota system, bringing the number of women in the new legislature to 20. In all, 252 women contested the elections through 218 lists, and they received a total of 266,000 votes, which is considered a new record for women in Jordanian elections. On the other hand, only 32% of eligible female voters cast their vote.

On a brighter side, especially for those who support democratic reforms and an all-encompassing secular state, the Ma’an (Together) list, competing in Amman’s third district, made history by winning two seats. While the victory is symbolic, it underlines a growing debate in Jordan among the political elite on the need to set the foundations for a civic, secular and democratic society to confront both authoritarian and religious driven agendas.

Perhaps this is the biggest story in this latest election. Of more than 4 million registered voters — 1 million of whom are outside the country and cannot vote — voter turnout was a modest 37%, compared to over 50% in the 2013 elections. Amman was the lowest with only 23% voter turnout, and in its competitive third district turnout was only 18%. Similar low figures were marked for other urban centers like Zerqa and Irbid. Pundits believe middle-class voters had opted to stay home for a number of reasons including lack of confidence in the role of the legislature and its limited influence on government policies.

Election results have triggered calls by political parties and figures to review elections law shortcomings in preparation for the next legislative elections in four years time. Former Deputy Prime Minister Marwan Muasher, a staunch proponent of civil rights and a secular state, told Al-Monitor, “Voter apathy should prompt the government to reform the law to prepare the ground for parliamentary governments, which will not come about without genuine development of political parties.”

He added that the new law has not succeeded in restoring voter confidence in parliament. “We need to reach a stage where elections are held on the basis of voting for party and national lists,” he said.

For now, the government can boast that Jordan’s democracy is thriving and that the elections were a success. But with limited political party participation and a legislature that is still dominated by loyalists, many Jordanians believe that little has changed.