With a historic low turnout by voters at Jordan’s parliamentary elections, it is doubtful that the government will pick up the message that a growing majority of Jordanians are becoming indifferent to the role of parliament. 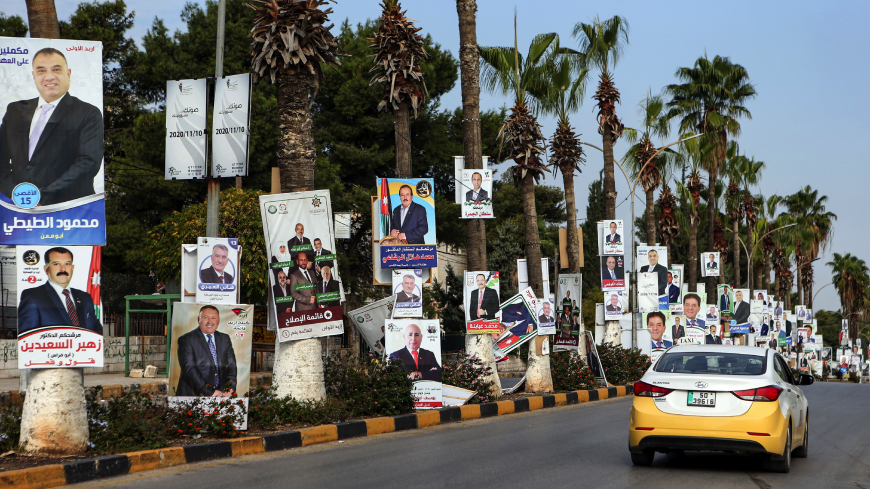 Vehicles drive past electoral banners for candidates and lists running in the 2020 general election in Jordan's northern Irbid on the day of the vote, Nov. 10, 2020. - MUSTAFA ABUMUNES/AFP via Getty Images

In an indicator of general voter apathy — especially in underrepresented urban areas — less than 30% of Jordan's 4.5 million eligible voters turned out on Nov. 10 to vote for the 130-seat Lower House of parliament. More than 1,600 candidates running on 294 lists contested the elections at a time when the kingdom is facing a spike in coronavirus infections, a shrinking economy and a rising rate of unemployment. Under the law, only voting in person is accepted.

The government had ignored calls on social media to postpone the elections for public health reasons. On the same day of the polls, the country recorded its highest infection and mortality rate — 5,996 positive cases and 91 deaths — putting Jordan at the forefront of countries with the most infections relative to population. Ministry of Health Undersecretary Wael Hiagneh told the official news agency on Nov. 10 that infections related to voting will become known within a week.

Following the closing of polls, the kingdom went into a four-day nationwide lockdown in an attempt to stem the tide of infections. But as provisional results were announced by midday Nov. 11, hundreds of supporters in a number of provinces broke curfew and celebrated their candidates’ victories by holding rallies and in many documented cases firing thousands of rounds of live ammunition into the air. A number of winning candidates joined their supporters in what looked like a coronavirus superspreader event. In other cases, angry supporters of losing candidates rioted and engaged in acts of violence. These unprecedented acts, which defied Defense Law orders against public gatherings, overshadowed the elections themselves and angered activists on social media who blamed the government for failing to implement the law.

As public anger simmered at the state of lawlessness, a seemingly angry King Abdullah tweeted on Nov. 12 his disappointment at the “sad scenes following the elections” and reiterated that "Jordan is a state of law where no one is above the law."

Immediately following, Prime Minister and Minister of Defense Bisher Al-Khasawneh held a press conference in which he denounced acts of lawlessness and the use of arms by “a minority,” vowing to hold those responsible before the law. He also announced that Minister of Interior Tawfick Al-Halalmeh had resigned after assuming responsibility, adding that the army and the gendarmerie will be deployed across the kingdom to round up illegal weapons and those responsible for breaking the law — including candidates.

Under the Jordanian Constitution, the king appoints the prime minister and approves the Cabinet in addition to appointing the 65-member Upper House. Following the elections, the government must seek a vote of confidence from the Lower House.

As expected, results indicate that independent and pro-government candidates, including many retired army officers, will comprise the majority of the Lower House, with only 16% having political party affiliation. The third district — one of the most contested in Amman — saw less than 13% voter turnout. The third district, with six seats, traditionally represents middle-class, educated Jordanians with mixed demographic and religious backgrounds and is usually contested by businessmen and moderate politicians. Outside Amman, with the largest population, turnout was higher — especially in rural and Bedouin areas. Candidates there rely primarily on the support of their own tribes.

The Civil State list, with two members in the former House, failed to win any seats. Only 15 female candidates will be represented under a quota system, five less than in the previous Lower House. And 100 candidates were elected for the first time.

The Independent Election Commission (IEC) had vowed that polling would be safe, and election observers noted that strict health precautions were implemented in polling stations but not outside of them, where voters and candidates failed to wear masks or follow social distancing. IEC spokesperson Jihad al-Momani confirmed in a press conference on Nov. 10 that the commission has evidence of cases of “black money” — a reference to candidates buying votes — and that it had referred these cases to the attorney general. He also confirmed that voters infected with the coronavirus had tried to vote, and at least one was arrested.

The Islamic Action Front — the political arm of the Muslim Brotherhood — has produced a broad civic alliance hoping to retain or increase its share of seats. It won 15 seats in 2016, but with low turnout in urban areas, especially Amman and Palestinian refugee camps, their share dropped to 11 this time. The Islamists had decided to contest the elections at a time when their ties to the government had deteriorated following internal splits and a court ruling last July that ordered the Muslim Brotherhood to be dissolved. The Islamists’ presence in the Lower House will be limited, but it’s the only way for them to remain relevant politically.

Election watchdog Rased said that 57% of voters polled said they don’t believe the next parliament will be effective. Rased coordinator Amer Bani Amer told Al-Monitor that 28% of lists contesting the elections said they had faced pressures from the government or from their tribes. He said that voter apathy is linked to the spread of the coronavirus, but it is also tied to lack of political reforms.

The former government of Omar Razzaz had promised to initiate such reforms, including amending the controversial election law that — despite having been revised before the 2016 elections — remains a variation of the unpopular single vote system. The system is based on open lists where voters must choose a list and then candidates within that list. No one list is expected to win in its entirety, and voters are likely to choose the first name in any list. The election system has been criticized for its many failings, including the fact that urban areas like Amman and Zerqa are underrepresented compared to rural areas with smaller populations. The system continues to favor non-urban areas for demographic and political reasons.

So it is business as usual in Jordan, where the incoming Lower House is expected to be even more conciliatory toward the government. But with a historic low turnout by voters, it is doubtful that the government will pick up the message that a growing majority of Jordanians are becoming indifferent to the role of parliament, which one veteran lawmaker had once described as decor.