The tricky balance of power in Jordan may save the local Muslim Brotherhood chapter from a fate similar to that of its counterparts in Egypt and the Gulf. 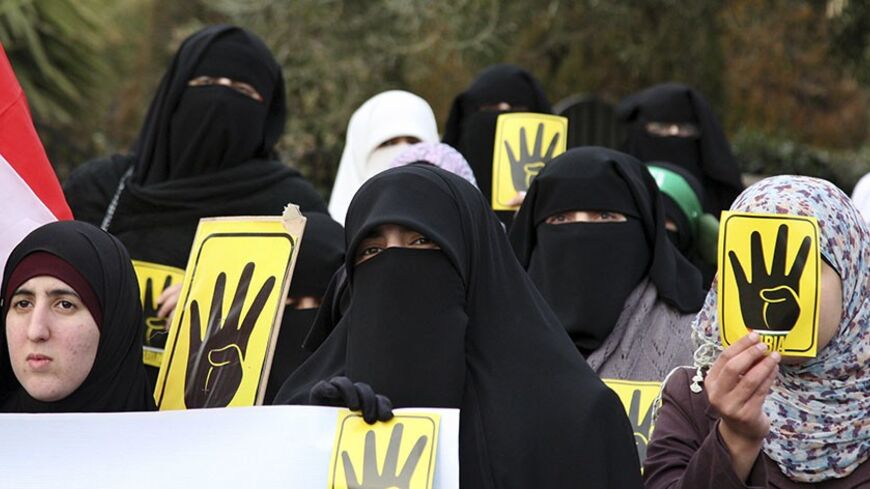 Jordan will not follow in the footsteps of Saudi Arabia and Egypt by banning the activities of the Muslim Brotherhood or labeling the group a terrorist organization. But the recent Saudi decision has added to the movement’s political isolation in Jordan, a situation that many believe is of its own making.

It took Jordan a few days to react to the sudden Saudi development. Minister of Political Affairs Khaled al-Kalaldeh told a local news website, “The Muslim Brotherhood in Jordan is a licensed group, and we will deal with it in accordance with the law.” He said the Saudi decision is an internal issue and Jordan does not interfere in the affairs of others.

But the Saudi move quickly drew criticism from key Islamist leaders in Jordan. A leading member of the Brotherhood in the kingdom, Zaki Bani Irshaid, described the decision as “emotional” and added that the ban's effects will be limited and not extend to Jordan, “which has always maintained its independence throughout various periods.”

It is this positive relationship between the Hashemite regime and the Muslim Brotherhood that the movement is betting on. Jordan received key Muslim Brotherhood figures as asylum seekers, mainly from Egypt, back in the 1950s at the height of tension between Amman and Cairo. The Brotherhood supported the shaky throne of the late King Hussein bin Talal against attempts by Egypt’s Gamal Abdel Nasser to destabilize Arab monarchies.

In return, Hussein allowed the group to function legally as a social organization. When all political parties were banned in 1957, the Brotherhood was the only group to be spared. After that, it expanded its social and educational activities in Jordan and emerged as the only organized movement in the country when political life resumed and parties were allowed to form in the early 1990s.

It was no accident that the Brotherhood’s newly formed political arm, the Islamic Action Front (IAF), quickly dominated the scene in the 1993 legislative elections, comprising the biggest bloc in the Lower House. Only then did the regime realize the growing power of Jordan’s Islamists, prompting it to tweak the electoral law repeatedly to fragment their power in the legislature and among the electorate.

Since then, the rift between the regime and the Brotherhood has grown wider, but both were careful to avoid a breaking point. The movement protested government attempts to undermine its presence, while insisting that it remained a loyal opposition whose mantra revolved around the ambiguous slogan of “Islam is the solution.”

But then movement went through major infrastructural shifts. The moderate old guard — the doves — were sidelined, giving way to a more radical generation of Islamist politicians who became vociferous in their calls for political reforms and constitutional amendments that intruded on the king’s powers.

Such calls reached their climax with the eruption of the Arab Spring, which paved the way for the rise of Islamist powers in Tunisia and Egypt. The movement, which had chosen to boycott legislative elections since 2007 in protest of the election law, led a coalition of secular and nationalist groups and parties calling for political and constitutional reform. By doing so, the Brotherhood appeared to have widened the gulf between it and the regime.

But Jordan was now ruled by a young monarch who was less sympathetic to their cause than his father. King Abdullah II had distanced himself from the Brotherhood’s radical leaders. He was not flustered by their repeated boycotting of legislative elections. His lack of enthusiasm over the victory of Muslim Brotherhood leader Mohammed Morsi in Egypt was visible. And his quick embrace of the new regime that unseated him last July was remarkable. In his famous March 2013 interview with The Atlantic, he was exceptionally harsh in his criticism of the movement, describing it as a “Masonic cult” and the Brotherhood as “wolves in sheep’s clothing.”

The movement insists that the Muslim Brotherhood’s estrangement in Egypt, Saudi Arabia and the United Arab Emirates will not affect its status in Jordan. Former IAF leader and moderate figure in the movement Abdel Latif Arabiyyat told Al-Monitor that there is “a historic relationship between the regime and the Brotherhood in Jordan … and differences between them are marginal, which could be resolved through dialogue.” He added, “The movement does not pose a danger to the regime, only seeking to reform it and not replace it.” Arabiyyat, who is close to the regime, had served as speaker of the Lower House three consecutive times in the 1990s.

But former Muslim Brotherhood General Overseer Abdul Majid Thneibat told a local website last week that the unity of the Islamic movement in Jordan is now in regression because of its boycott of the political process and regional changes. Thneibat, also a moderate, said the Brotherhood needs to revise its position on many issues and improve its relationship with the state. He criticized the movement’s decision to put some reformist members associated with the National Initiative for Building, or Zamzam, which seeks to reform the group, on trial by the movement’s disciplinary board.

The founder of the Zamzam initiative, Irhail al-Gharaibeh, told Al-Monitor that he rejected suggestions that Jordan could be influenced by the Egyptian and Saudi decisions. He said that the movement “rejects violence and pursues religious and educational paths seeking to reform society, while realizing its special relationship with the regime.”

In spite of losing its influence in the street, especially after the fall of Morsi, the Muslim Brotherhood remains a potent power in Jordanian politics. Pro-government media outlets have criticized the movement in recent months and some accused it of attempting to install a religious state with an outside agenda. But the public mood, as well as regime calculations, would not go as far as banning the group. The tricky balance of power in Jordan will not allow it.

Head of the IAF Hamzeh Mansour told Al-Monitor that the Brotherhood remains a Jordanian movement that reflects the aspirations of the people and their nationalistic values. Some in the regime and the government might disagree with that, but for now, the tense relationship is likely to survive.