The Muslim Brotherhood has sustained its popularity in Jordan, where it continues to win elections in major professional and student unions. 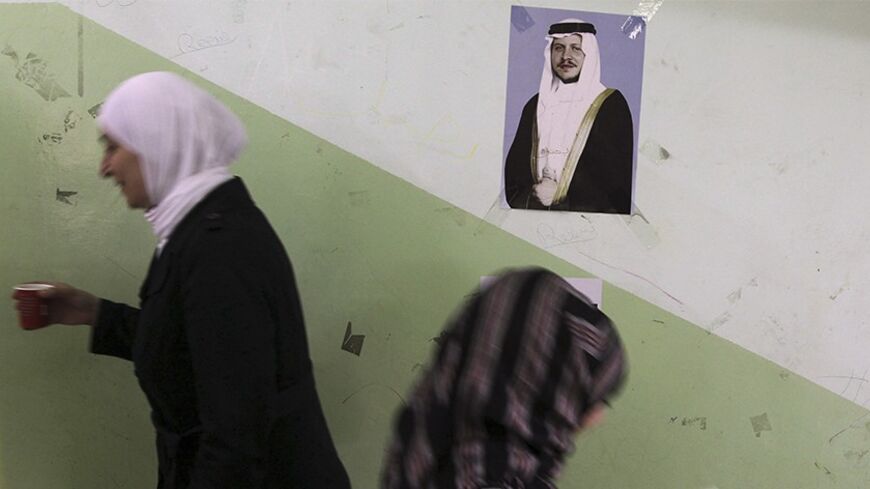 A Jordanian woman walks up stairs past a picture of Jordan's King Abdullah as she goes to cast her ballot for municipal elections at a polling station in Amman, Aug. 27, 2013. - REUTERS/Muhammad Hammad

In the first true test of its influence and popularity following last year’s dramatic events in Egypt, Jordan’s Muslim Brotherhood celebrated with its March 27 electoral victory the kingdom’s largest professional union in what observers described as a free and fair election. Islamist candidates and their allies won more than 70% of the seats in the 100,000-strong teachers union across the nation. Their opponents — nationalists and leftists — were unable to snatch this important association from the Islamists for the second time in three years.

The results stunned both the government and delighted supporters. Since Egypt's President Mohammed Morsi was toppled by the army, the Jordanian government had worked to undermine the Muslim Brotherhood in Jordan. Although no punitive measures were taken against the movement, which has been active in Jordan since the 1950s, the Islamists were exposed to harsh and arguably sometimes unwarranted attacks by pro-government columnists, who accused the Brotherhood of foreign allegiance and of harboring an authoritarian agenda. The Islamists, in turn, accused the government of waging a campaign to demonize them.

But the movement was shaken by recent regional events, including Saudi Arabia’s decision to designate the Muslim Brotherhood a terrorist organization. Its fall in Egypt and banning by a number of Gulf countries, along with the Islamist-led opposition in Syria's failure to defeat the Damascus regime, have increased the Brotherhood’s isolation in Jordan. While there are no indications that Jordan was about to follow Saudi Arabia in banning the movement, the general perception by the public was that the Brotherhood’s popularity and ability to mobilize the street had been undercut. But last week’s teachers union election shattered that view.

Minister of Political Development Khaled al-Kalaldeh admitted in press interviews that there is now no “parallel to the Islamists” in the political arena. His statements underlined what many observers have always believed: that the Muslim Brotherhood remains the only organized group in Jordan that has genuine influence over the public.

But those who believed that the Islamist movement was weakening had a good argument, too. The Muslim Brotherhood had led public protests when the Arab Spring erupted in 2011. It organized weekly demonstrations and allied itself with nationalist and leftist groups and parties. But its ability to mobilize tens of thousands of Jordanians was tested many times.

In spite of the major political events that swept through Tunisia, Libya, Egypt, Yemen and Syria, Jordanians remained wary of destabilizing their country. The youth movement was unable to rally Jordanians and today is politically dead. The alliances between the Islamists and others had collapsed almost a year ago, leaving the Muslim Brotherhood the only opposition in the public domain. Although hard-liners were now in control of the movement, it became apparent in the past few months that they chose to reduce their public activities and tone down their anti-government rhetoric.

The Brotherhood’s leadership did not want to antagonize the regime or give it reason to take action against the Islamist movement. When a Jordanian judge was gunned down last month by an Israeli soldier at the Allenby Bridge, thousands of angry Jordanians protested near the Israeli Embassy in west Amman. Islamist participation in that event was deliberately low profile.

It could be that the government had miscalculated in choosing not to interfere, believing that the Islamists had lost their public base and that the teachers union elections could go either way.

But a few days after the polls, the Islamists contested another important election: the contest for the council of the University of Jordan Students Union. Here, the reaction was different. The Islamists complained that their candidates had been subjected to a wave of terror and intimidation and accused "outlaws" of interfering in the voting process.

There were clashes on election day, but the Islamists prevailed there as well, winning over 45% of the votes. In a rare conciliatory message to the government, the Consultative Council of the Muslim Brotherhood issued a March 28 communique praising the state’s position in regard to the free elections of the teachers union.

Such messages between the Islamist movement and the government appear to underline the tense but steady relationship between the two sides. King Abdullah, who has been critical of the Muslim Brotherhood, has also resisted pressure from within the royal court to take action against the movement. He understands the unique historical rapport between the regime and the Brotherhood, one that has survived for decades.

The question now is whether the Islamist movement ends its boycott of legislative and municipal elections in light of its recent gains. A former moderate overseer of the movement, Abdel Majid Thneibat, had called on the Islamists to end their self-imposed political isolation. There are no upcoming parliamentary elections, but the government has promised to amend a contentious election law this year.

When it participated in past legislative elections, especially between 1990 and 1993, the Muslim Brotherhood emerged as the largest bloc in the Lower House. One of its moderate leaders, Abdel Latiff Arabiyyat, became the speaker for three consecutive terms. He told Al-Monitor in a recent interview that this feat is proof of the popularity of the Islamist movement in Jordan and its moderate course. He added that throughout its history, the movement has allied itself with the Jordanian state, which gave it a “special status” in society.

As the Islamist movement celebrates its recent victories, it is also sending conciliatory messages to the regime. Knowing that it still enjoys popular support might encourage it to contest future legislative elections. The regime, on the other hand, will be thinking hard about its next step. Fear of the Islamist movement has not gone away, but Jordan’s assessment of its role and contribution to the political process is different from that of its neighbors.