The arrest of one of the most senior Muslim Brotherhood leaders in Jordan has plunged its relations with the ruling regime into a crisis which threatens to escalate. 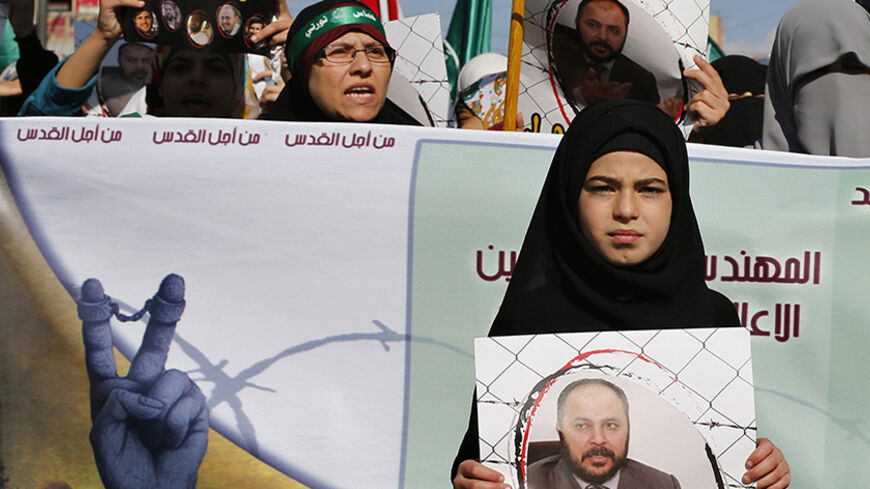 A protester from the Islamic Action Front carries a picture of the deputy overall leader of Jordanian Muslim Brotherhood Zaki Bani Irsheid, who was arrested by the Jordanian authorities the previous week, after Friday prayers in Amman, Nov. 28, 2014. - REUTERS

Relations between Jordan’s Muslim Brotherhood and the government are on edge following the Nov. 20 arrest of one of the movement’s most senior leaders, Zaki Bani Irsheid. The group’s repeated demands to set Bani Irsheid free have been rejected and the State Security Court has refused to grant him bail.

On Nov. 28, Islamists and tribal movements organized a demonstration in downtown Amman, following Friday prayers, during which participants held pictures of Bani Irsheid and accused the government of carrying out politically motivated arrests of Islamist activists. Since the beginning of November, tens of Islamists belonging to the Engineers’ Association have been arrested. Some were charged under the controversial Terrorism Prevention Law and if convicted on charges of possessing firearms, explosives and conspiracy, they stand to receive hefty prison sentences.

Bani Irsheid was arrested for publishing an article on his Facebook page that condemned the United Arab Emirates (UAE) for its decision to declare the Muslim Brotherhood a terrorist organization. He was charged of harming Jordan’s relations with a foreign state. The movement responded by saying that the charge was political in nature and that it infringed on Bani Irsheid’s constitutional right of free speech. Lawyers, including former President of the Lawyers’ Association Saleh al-Armouti, said the government was waging a campaign of political arrests of activists and that Bani Irsheid’s detention and possible trial constitute a violation of his constitutional rights.

Minister of Political Development Khaled al-Kalaldeh told Al-Monitor that the government “was not engaged in an official campaign against the Islamist movement in Jordan.” He said the fact that five members of the Muslim Brotherhood have been arrested recently had nothing to do with the movement, but is linked to their personal acts. “It is for the courts to decide each case,” he said.

The Islamists believe that the recent arrests, in which the General Intelligence Department (GID) was involved, comes in the wake of public condemnation, especially by the Muslim Brotherhood and the IAF, of Israeli incursions into Al-Aqsa Mosque and their criticism of what they believe is a lukewarm reaction by the government.

Mohammad al-Zyoud, IAF secretary-general, told Al-Monitor that the government’s arrests of senior Islamist leaders was “unprecedented,” adding that the timing of such moves raises suspicion. “Bani Irsheid’s arrest was a wrong move and has created a crisis between us and the government, which wants to prevent us from expressing our position on issues.” Zyoud said that the government has arrested many dissenting activists and almost all of them are part of the Islamist movement.

There are observers, however, who believe that the clash between the Muslim Brotherhood and the government was inevitable for many reasons. The movement, the largest opposition group in Jordan, has boycotted parliamentary and municipal elections and hawks within it have rejected appeals by moderates to engage in dialogue with the government. Furthermore, with Egypt, Saudi Arabia and the UAE banning the movement, Jordan has come under pressure by its regional allies to take action. So far, the regime has resisted such pressures, but with Bani Irsheid attacking the UAE and others, the government felt that a message had to be sent.

Mohammad Abu Rumman, expert in Islamist affairs, agrees and told Al-Monitor that the crisis between the movement and the regime goes back almost 20 years. “Eventually there will be a divorce between the two, but the regime will not be pressed into banning the movement anytime soon,” he said. He added that Jordan is now under pressure by its Arab allies and recently criticism of the policies of these allies had increased. “Bani Irsheid’s attack on the UAE required a strong reply from the government,” he said.

Abu Rumman said that Jordan was faced with three options with regard to the Muslim Brotherhood: ban the movement, which would create a political crisis; begin a dialogue with it and hope to reach a deal; and bet on the eruption of an internal rift inside the movement. “The decision, it seems, was to opt for the third option,” he said.

Others believe that the movement has failed to learn the lessons of its counterpart in Egypt and chose to defy the regime. Political analyst Fahd al-Khitan told Al-Monitor that the hawks, who control the group, chose to repeatedly challenge the government and the regime. “They have misread the government’s position as weakness and refused to change their discourse,” he said. “The government had to step in and take action and this is why we saw activists being arrested, including Bani Irsheid.”

There are no signs that the Islamist movement in Jordan is about to change its position. Senior leaders of the IAF and the Muslim Brotherhood have publicly supported Bani Irsheid’s comments on the UAE and defied the government for trying to silence its critics. His case is now going to court amid tribal and political condemnation. If he is found guilty and sentenced to prison, the tension that exists now is likely to turn into a crisis and perhaps even confrontation.