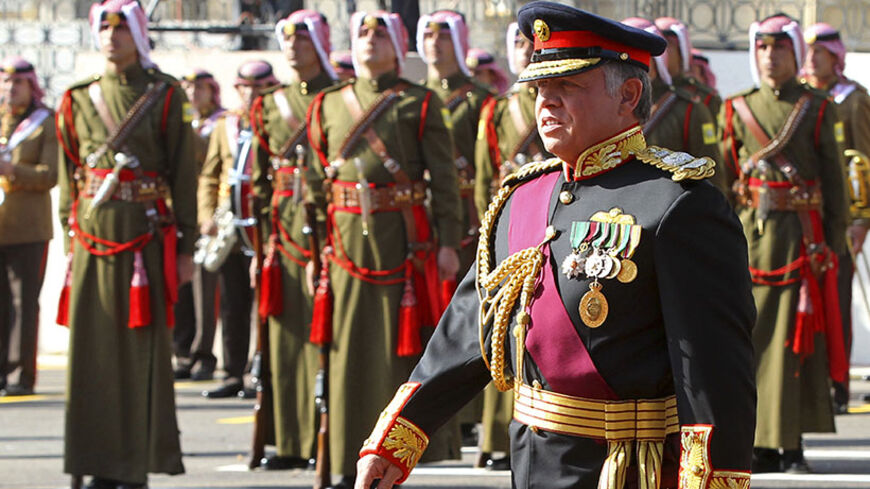 Jordan's King Abdullah walks during the opening of the 17th Ordinary Session of Parliament in Amman, Nov. 3, 2013. - REUTERS/Muhammad Hame

On Aug. 14, the Jordanian government announced that it would ask parliament to approve two constitutional amendments giving the king sole authority to appoint the head of the armed forces and director of the kingdom’s General Intelligence Department (GID). Almost three years ago, in October 2011, in response to public protests calling for political reforms, King Abdullah II had approved a number of constitutional amendments that curtailed some of his powers and allowed for the creation of a Constitutional Court and an Independent Elections Commission.

These reforms were hailed as a major step toward full constitutional monarchy. Jordan’s version of the Arab Spring was largely peaceful and bloodless, and Abdullah was able to project himself as a champion of political reforms that would lead, according to statements made in June 2011, to the formation of parliamentary governments. That promise remains to be fulfilled.

The Muslim Brotherhood’s Islamic Action Front (IAF) boycotted the 2013 legislative elections, and other political parties performed poorly, failing to fill the vacuum. Weak and unpopular, the parties' presence in the current Lower House, comprised mostly of independents, is modest. The government of Prime Minister Abdullah Ensour, appointed by Abdullah in October 2012, was supposed to include elected deputies as a precursor to the formation of parliamentary governments. To date, however, Ensour has failed to fulfill that pledge, probably due to royal objections.

It is clear that Abdullah instructed Ensour to handle the two constitutional amendments. Under the current constitution, the government recommends the appointees for head of the armed forces and GID director, and the king approves them through royal decree. The king had asked the prime minister on Aug. 12 to “activate” the Ministry of Defense, whose portfolio has been handled directly by the prime minister for decades. In effect, the portfolio will now be managed by a civilian or a retired army officer. The king said the new ministry will handle “political, economic, legal and logistical duties related to national defense … and nonmilitary services … while allowing the armed forces to dedicate its time to professional military duties.”

The government is rushing the two amendments through parliament, which has been convened in an extraordinary session. The timing and reasons for the amendments, described by Ensour as important reforms that will enhance Jordan’s democratic process, were not made clear. Pundits rushed to explain the surprise move. Clearly Abdullah is looking to expand his authority, making sure that the decision to appoint and fire the heads of two very sensitive institutions remains his alone.

Critics of the move did not waste time making their points. In general, they saw the move as a violation of the constitution and a derogation of the general mandate of the government. A number of retired army officers issued a statement denouncing the action, describing it as “an attack on the constitution and a challenge to the will of the people, who are the source of all authorities.”

Mohammad al-Hammouri, a respected constitutional expert and former justice minister, wrote on Aug. 19, “Giving the king exclusive powers to appoint the heads of the armed forces and GID constitutes an abrogation of the parliamentary system and a coup against the constitution, effectively turning Jordan from a constitutional monarchy to a presidential monarchy.”

He added that the Jordanian system of government is based on the principle of separation of powers, with the people being the source of authority. He added that the only exclusive power that the king has is to prevent amendment of the constitution, while the authority to run the state’s domestic and foreign affairs is tied directly to the Council of Ministers.

Omar al-Atout, a lawyer, published an article on Aug. 14 accusing the government of “committing the crime of undermining the regime.” He wrote that the amendments aim at “implicating the monarchy by making the king directly responsible for any mistakes committed by the security institutions … and by demoting the king from being a judge over all branches of government to a mere player.” He accused “frivolous boys” at the royal court of standing behind such ideas while reminding the prime minister that the first article in the constitution defines Jordan's system of government as a parliamentary monarchy.

Despite such strong legal objections, it is clear that the royal court is seeking to secure strategic objectives in pushing the amendments. Mohammad Abu Rumman, a political commentator, provided one possible explanation when he wrote in the daily Al-Ghad on Aug. 14 that the royal move aims at “redefining the role of the monarchy in Jordan” and that the king is pushing toward the formation of parliamentary governments “but not until he secures some guarantees … by withdrawing sovereign key decisions from governments and placing them in his hands to protect the country’s security and to prevent key positions from being influenced by political wrangling.” He also said that the suggested amendments will “clash head on with the philosophy of the system of governance and the spirit of the constitution, where the king enjoys full immunity from direct responsibility.”

Abu Rumman’s explanation echoes that of others who believe the king is about to engage Jordanians in a new political experiment through parliamentary government. The legislature is yet to pass a new political parties’ law, and the government has promised to make substantial changes to the controversial election law next year.

Despite vocal opposition from a number of deputies, the lower house of parliament is likely to approve the two amendments in a special session as early as this week. Deputy Tamer Bino told Al-Monitor the amendments “affect the identity of the political system in Jordan,” reminding colleagues that former GID directors had been convicted of corruption in the past and sentenced to jail. He said, “If this happens again, then who will bear the final responsibility?”

Minister of Political Affairs Khaled al-Kalaldeh told Al-Monitor that both the chief of the General Staff of the armed forces and GID director will be under the oversight of both the executive and legislative branches, regardless of the proposed amendments. Deputy Jamil al-Nimri said that the amendments were “unnecessary and based on unrealistic fears,” arguing, “The general mandate of the government could have been saved by maintaining the current system of appointment.” He told Al-Monitor that Jordan should get ready for full parliamentary government and even party-led governments in the future.

It is clear that the controversial amendments will be approved and that the king’s powers will be increased in contrast to the reformist course adopted during the height of the Arab Spring. Apologists say this will pave the way for the creation of full parliamentary governments in the near future, but how this will affect the evolution of Jordan’s monarchy remains an open question.