The newly approved amendments to the Jordanian Constitution will change the king's role in appointing key officials, though observers disagree on whether this will serve or weaken the country's parliamentary system. 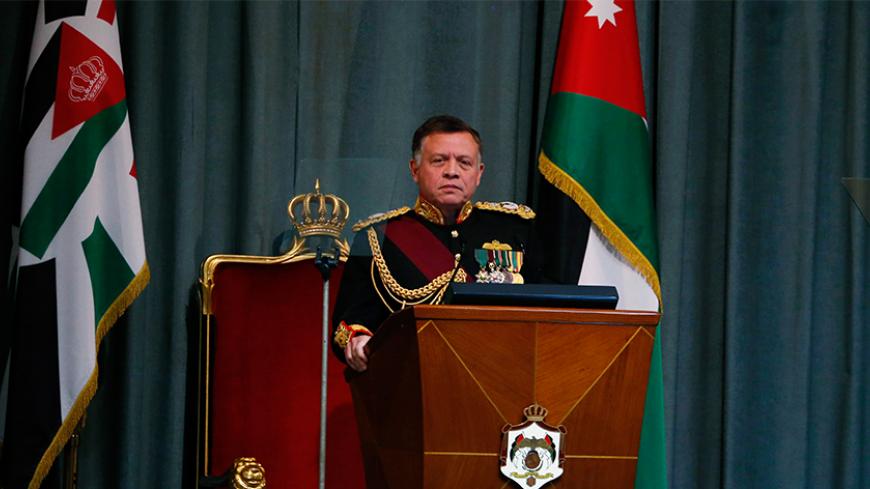 Jordan's King Abdullah speaks during the opening of the second ordinary session of the 17th parliament session in Amman, Nov. 2, 2014. - REUTERS/Muhammad Hamed

It took Jordan’s two-chamber parliament about two weeks to overwhelmingly approve a number of constitutional amendments that the government had hastily presented on April 18. On May 2, the upper house of parliament adopted the amendments a week after the lower house had done the same.

In contrast to the amendments that were recommended by a special royal committee in September 2011, in the midst of the Arab Spring, this time there was no public debate. And while the 2011 amendments — which affected one third of the constitution and limited the king’s constitutional powers to postpone elections, dissolve the lower house indefinitely, keep a government in office or re-appoint a prime minister — were seen by the public as enhancing political reforms and underlining the kingdom’s status as a constitutional monarchy, the latest installment of alterations triggered controversy.

The government did not specify the reasons behind the changes, which give King Abdullah the sole power to appoint the heads of the military, security forces, police, senate and constitutional court, in addition to the regent, without the recommendation of the Cabinet of ministers, as was the case previously. In addition, one article in the constitution was revised to allow dual nationals to run for or be appointed to senior public posts.

But when the lower house discussed the amendments over a number of sessions on April 19, Prime Minister Abdullah Ensour defended them, saying they are “progressive” and aim to enhance the principle of separation of powers. Speaker of the upper house and former Prime Minister Faisal al-Fayez went further, telling Ammon News April 24 that the changes are intended to pave the way for the formation of parliamentary governments, in which the largest party or coalition in the lower house would form a new government.

At present the king has the sole power to appoint a prime minister from within or outside of parliament. Fayez said the amendments are meant to keep key sovereign military and security posts from being politicized.

Refuting criticism that the amendments actually reverse the reform path and consolidate the powers of the king, Fayez responded, “A strong king means a strong Jordan.”

But the amendments elicited strong criticism from public figures, including the former speaker of the lower house, Abdel Karim al-Dughmi, who voted against them. Addressing lawmakers on April 24, he described the alterations as a “coup against the constitution and Jordan’s political system.” He vowed to vote against them, adding that the king enjoys immunity under the constitution. But how would that work when he alone appoints public figures who may still be accountable under the law?

One constitutional authority, Mohammad al-Hammouri, addressed this particular point in an April 24 article for news site JO24, saying that under the Jordanian constitution, “The king can do no wrong” and the authority comes from the people through an elected legislature and the king rules through his ministers, who are accountable when he is not. He added, “Under these amendments, we are no longer a parliamentary system.”

The Islamic Action Front, the largest opposition party in the country, issued a statement on April 24 criticizing the amendments and described them as “leading to absolute rule and constituting a clear reversal from the reform discourse that the king had preached, especially with regard to the formation of parliamentary governments with full authority.”

But the debate has failed to spill over into the public arena. In contrast to mass protests during the Arab Spring, there were few demonstrations in Amman and other towns following Friday prayers on April 29. Only the article regarding allowing dual nationals to hold public posts appeared to galvanize popular protests.

Still, the amendments were defended by prominent figures who had previously called for wider political reforms. Former Prime Minister Taher al-Masri told Al-Monitor that the latest amendments “pave the way for the formation of parliamentary governments and strengthens political parties while distancing military and security institutions from political gravitations.”

He added that these institutions belong to Jordan's citizens and should not be politicized. Masri stressed that the king is still committed to political reforms and “the latest amendments point to the fact that our constitutional monarchy is maturing.”

But former deputy prime minister and head of the Royal Committee for the National Agenda Marwan Muasher disagreed. He told Al-Monitor that it is wrong to believe that these amendments “actually serve the king or that they enhance the principle of separation of powers.”

He added, “We all know that appointing the head of the army or security cannot be done without the approval or choice of the king. But changing the rules of the game now and altering the principle that the king rules through his minister, which has preserved the stability of the country, is a [dangerous] precedent.”

One lawmaker who is well known for advancing equal rights for citizens and defending political reforms, Mustafa Hamarneh, is critical of the recent amendments, which he said have “deformed the constitution, damaged the three branches of government and concentrated powers in the hand of the king.”

He told Al-Monitor, “The changes have taken authority from the people and distanced us from the goal of forming parliamentary governments.”

On May 2, Ensour announced that Jordan is currently preparing to hold parliamentary elections, though no date has been specified yet. It is not clear if the latest amendments will lead to the formation of parliamentary governments as promised by the king.

Jordan may be attempting to copy the Moroccan example of allowing political parties to form governments while keeping so-called sovereign posts in the hands of the king. Those who defend the move say Abdullah remains the best guarantor against possible abuse of power by ruling parties or blocs. Others are asking what will happen if the experiment fails and we end up with a monarch who wields too much power and is unaccountable for his decisions.