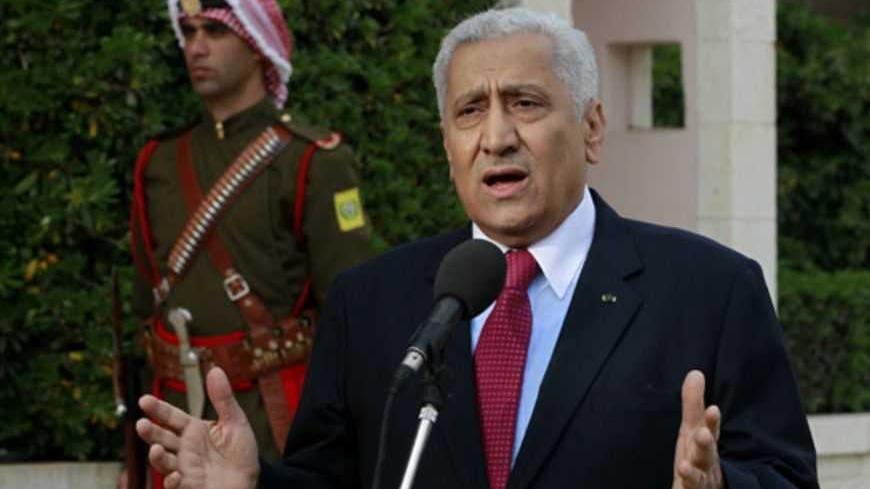 Jordan's new Prime Minister Abdullah Ensour speaks to the media after the swearing-in ceremony for the new cabinet at the Royal Palace in Amman, March 30, 2013. - REUTERS/Muhammad Hamed

After almost two months of deliberations that included consultations between the Royal Court and Lower House deputies, and later between Prime Minister-designate Abdullah Ensour and parliamentarians, a new Jordanian government was formed Saturday. But contrary to expectations the new Cabinet looked very much like previous governments, composed mostly of loyalists. This was supposed to be Jordan’s first parliamentary government, an obscure term that no one dared define. In the end, Ensour, who headed the previous government, excluded deputies from his Cabinet.

Critics reacted immediately by describing the new government as “tasteless” and “disappointing.” Hamzeh Mansour, secretary-general of the Islamic Action Front (IAF), the biggest political party in the country which chose to boycott last January’s parliamentary elections, said that “the problem is not with names [of ministers] but with the way governments are formed and [government] programs.” He added that “the new Cabinet differs slightly from previous ones and did not bring any added value.” He reiterated his party’s position that for change to happen the election law must be reformed.

Marwan Faouri, head of the political committee of the Islamic Wasat (middle) Party, which is represented in the Lower House, said the new government is “disappointing” and that “there is no indication that political reforms are forthcoming.” He criticized the policy of marginalizing political parties and noted that King Abdullah II had called recently for a ruling coalition of parliamentary blocs.

The king had talked repeatedly about a new approach for government formation in Jordan, calling on parliamentary blocs to come together and form classical political platforms: left, right and center. Previously, the king used his constitutional prerogative to appoint a prime minister who would then choose members of his Cabinet. The king can still sack the prime minister at will, but he recently told deputies that the new government will complete the full four-year term of parliament. Between 2010 and 2013, Jordan had five prime ministers, a number of whom barely completed three months in office.

Without limiting his own powers, the king suggested a new mechanism where deputies would agree on a new prime minister who would later consult with them before forming his Cabinet. It is a new territory for the legislators who are required to grant a vote of confidence to the new government and can withdraw it at any given time.

But the two-month exercise has hardly changed anything. The 150-member Lower House could not agree on a new premier and eventually bowed to pressure from the Royal Court to choose the incumbent Ensour. A former deputy who had opposed government policies before, the 74-year-old Ensour was picked by the king last November to head a short-term government that would oversee the holding of parliamentary elections. But Ensour, who is an economist, extended the mandate of his government to implement emergency measures to salvage the kingdom’s ailing treasury. He ended fuel subsidies and cut government spending which resulted in mass public protests.

At the onset of consultations between the Royal Court and deputies, many legislators said they would not accept Ensour as a candidate because of his austere economic policies. He did not endear himself to them when he said that he was obliged to implement further price hikes under an IMF loan agreement with the kingdom.

But when deputies could not come up with an alternative, most backed Ensour. And when the king picked him to form his second government last month, he promised to carry out in-depth consultations with the deputies before announcing his Cabinet.

He met with blocs and independents and spent hours listening to calls to incorporate deputies into his cabinet. But by the end of the day, he said that the option was off the table for the time being. In the end, he ignored most calls and made his own choice for the new government.

His new Cabinet comprises 18 ministers, the lowest number in 35 years, with one woman. In his letter to the king, Ensour praised the new mechanism of consulting with the people’s deputies but said that he will ask for a royal permission soon to make use of deputies in the executive branch, meaning that he might incorporate them into his government in the near future to fulfill the king’s vision of having parliamentary governments.

Pundits and opposition parties agree that real reform can only come if and when the election law is amended in a way that will enliven political parties and encourage their participation in political life. The irony is that the king has recently made it clear that he does not trust the Muslim Brotherhood (MB) which will benefit the most from a new participatory election law. In fact, maintaining the current single vote system for almost two decades was meant to undercut their influence.

Previous national dialogue and reform committees had all agreed that a new election law is needed. The king would like to see parliamentary governments take over but without the influence of the country’s Islamists. He also talked about a future stage when Jordan can become a true constitutional monarchy. But achieving this while limiting the Islamists’ influence is a challenge no one knows how to overcome.

Osama Al Sharif is a journalist and political commentator based in Amman.