Jordan’s prime minister conducted a Cabinet reshuffle for the fourth time since ascending to power to advance economic reforms required by a loan deal with the International Monetary Fund. 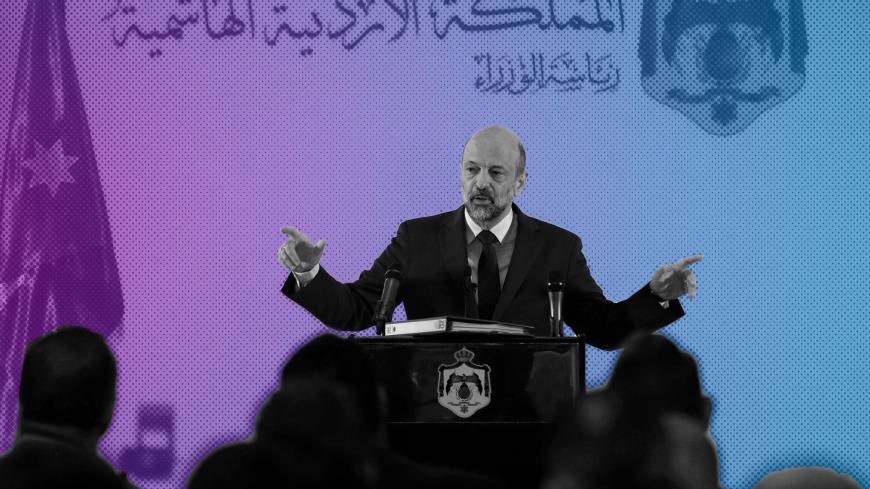 Less than two weeks after he unveiled on Oct. 27 what was described as “a comprehensive program” to stimulate the economy, Jordan’s Prime Minister Omar Razzaz reshuffled his Cabinet Nov. 7, effectively letting go of the head of his economic team, Deputy Prime Minister Rajai Muasher, and Finance Minister Ezzeddine Kanakrieh. Muasher is believed to have been a staunch supporter of fiscal reforms backed by the International Monetary Fund (IMF) under a 2016 agreement.

The reshuffle affected other portfolios as well. But the main heading for this unexpected move — a few days before parliament was to be back in session — was the departure of both Muasher and Kanakrieh, who only a few days ago, on Oct. 27, went live on local television to explain the various components of the stimulus package. Former Minister of Planning Mohamad Al-Ississ, a Harvard graduate and former senior economic planner at the royal court, was given the finance portfolio. He is now believed to be in charge of implementing the new plan to revive a stalled economy.

The new economic approach may be a hybrid between continuing with fiscal reforms and a public sector overhaul, and a retreat from austerity measures by offering incentives to investors and the private sector in a bid to trigger the economy. There is widespread public rejection of what is often described as “IMF dictates” on the government that are seen as inimical to the objective of boosting economic growth.

This was the fourth time in 17 months that Razzaz had requested King Abdullah reshuffle his government — and like the last three endeavors, Jordanians were left to wonder what the move was all about.

But while Jordanians were kept guessing about the meaning of the reshuffle and how it will reflect on efforts to stimulate the economy, the media focused on nuances associated with Razzaz’s fourth attempt at trying to put up an effective Cabinet, which now stands at 28 portfolios. Between the time he was appointed as premier in June 2018 following a month-long protest that had led to the sacking of the previous government, and this latest reshuffle, Razzaz had appointed 52 ministers in 511 days, of whom 27 held the position for the first time. In this latest reshuffle, nine new ministers were appointed for the first time.

Pundits were critical of the vague way ministers are picked up and then sacked without explanation. Under the Jordanian Constitution, the king appoints the prime minister who then selects members of his Cabinet subject to the approval of the monarch. There is no set mechanism for choosing ministers, but for decades, geographic, tribal, ethnic and religious quotas were always taken into consideration when forming a Cabinet. Then the entire Cabinet has to win a vote of confidence from the Lower House of Parliament in order to do its business. The prime minister is not obliged to ask for a new mandate from lawmakers when he makes a reshuffle.

Razzaz, also a Harvard graduate and former World Bank executive, was an unlikely candidate when the king chose him to head a new government last year since he does not hail from a large Jordanian tribe. He had performed well in the Ministry of Education under the previous government. Upon his designation, Razzaz promised to introduce political and economic reforms under the slogan, a “comprehensive national renaissance.”

But while his predecessor, Hani al-Mulki, was brought down when he sought to introduce a new income tax law demanded by the IMF, Razzaz went on to push for a similarly controversial law through the Lower House last November. And while he avoided dealing with political reforms, his government appeared to bow to demands by the IMF, with which the kingdom has a fiscal reform agreement in return for loans, to pass a series of unpopular regulations that raised tariffs and sales taxes on goods and services. Instead of increasing public revenues, the measures had backfired and economic indicators had either slumped or remained static at best.

But while Jordanians are yet to feel the impact of the IMF-led reforms — unemployment is nearing 20% and economic growth is just over 2%, while total public debt is close to $42 billion — the World Bank’s regional director for the Mashreq, Saroj Kumar Jha, announced Oct. 28 that Jordan has made “very good” progress on reforms required under a $1.45 billion financing package with the IMF. He told The Jordan Times that the kingdom is expected to receive the second tranche of the loan, amounting to $725 million, this November. He added that some reforms aimed at stimulating inclusive growth and creating jobs have already been completed.

With public discontent over economic conditions is building up, it is not surprising that public confidence in Razzaz’s government dropped. Even after he unveiled his economic stimulus program, only 44% of Jordanians believe the government can succeed in implementing the program, according to a poll carried out by the University of Jordan’s Strategic Study Center published Nov. 4.

The stimulus package seeks to provide incentives that aim at stimulating the economy and the flow of investments, in addition to introducing financial reforms and improving citizens’ livelihoods and public services. Following the swearing-in of the new ministers, Razzaz announced Nov. 7 that the government will issue additional incentives in bundles that will have a direct effect on citizens and targeted sectors.

King Abdullah, who had chaired several economic workshops in the past few weeks, has been pushing the government to adopt a package of economic incentives. On Nov. 10 and upon the opening of an ordinary session of parliament, the king said, “The government has launched the economic program’s first package and will announce other detailed packages, including a review of regulations and legislation related to taxes and customs, in order to facilitate business and reduce the burden on citizens.”

But experts are divided over the effect of the stimulus package with leaders in the private sector expressing their disappointment and describing the incentives as limited in their scope and effect. Deputy head of the Jordan Chamber of Commerce Mahmoud Jalees told Al-Monitor that the package is like “prescribing a sedative in order to avoid much-needed surgical intervention to save the economy.”

He added that “a real stimulus must seek to lower taxes, cancel VAT on essential goods and reduce customs fees and tariffs … but in the eyes of the government, merchants are still viewed like an ATM where it believes it can withdraw money anytime it wants.”

Commenting on the reshuffle and the economic stimulus, the editor of the business-oriented Al Maqar website, Salameh Darawi, said that the appointment of Ississ as minister of finance sends a message to international organizations and donors that the government will continue to pursue the same economic policy, especially since Ississ is a member of the negotiating team with the IMF. In a Nov. 9 article, Darawi added that the fourth reshuffle took into consideration adherence to the quota-based system of allocating portfolios to members of tribes in an effort to appease the youth movement, some of whom have been protesting every weekend in front of the prime minister’s office, calling for major reforms.

With less than six months remaining before parliament’s term expires, necessitating the departure of the government as well, pundits wonder if Razzaz and his team have enough time to jumpstart the economy. But for now, the government faces an immediate challenge, which is to pass the 2020 state budget having failed to meet the stated financial objectives set for this year.