King Abdullah II of Jordan is portraying himself as a champion of reform in order to head off further protests, writes Osama Al Sharif. 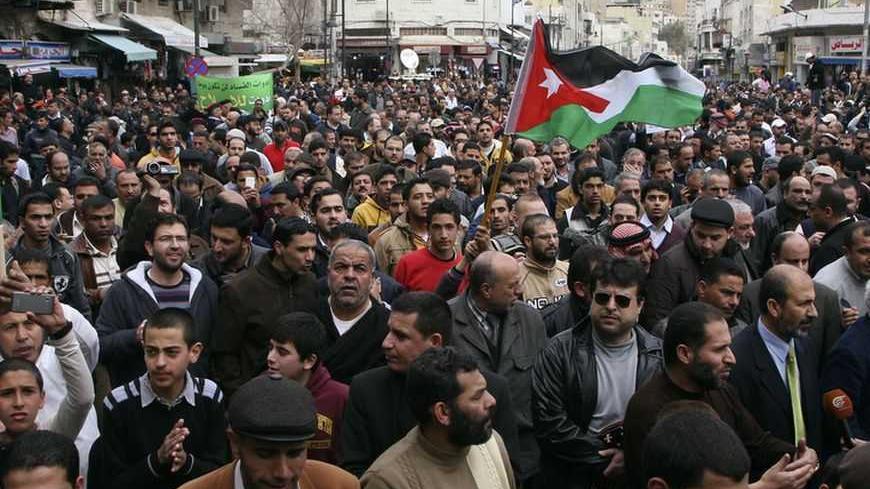 Protesters from the Islamic Action Front and other opposition parties shout slogans to demand political and economic reform, and access to corruption cases, during a demonstration after Friday prayers in Amman Feb. 22, 2013. - REUTERS/Majed Jaber

Jordan will have a new government in a few days. That in itself is no big news, since the kingdom has had five governments in the last two years. What is special about this one is that it comes after more than a month of drawn out deliberations — first to name a new prime minister and then to agree on the composition of the cabinet. It’s a new process that King Abdullah II promised late last year in a bid to set a course for political reform, beginning with credible legislative elections and followed by consultations with the deputies to form the closest possible thing to a parliamentary government. The entire process should eventually usher in a new phase of constitutional monarchy.

It’s the king’s way of steering the country through two years of public protests calling for political reform — Jordan’s version of the Arab Spring. No one knows if this royal recipe for reform will succeed, but in the past few months the young monarch has been able to transform himself into a champion of political reform. He has often complained that progress towards achieving his royal vision has not been fast enough.

This transformation — from being the target of public protests to becoming the main engine for political and economic reform—has taken Jordanians by surprise. It has also dampened the opposition’s ability to mobilize those in the streets. Since the king dissolved an unpopular parliament in November and ordered new elections to be held earlier this year, to be supervised by an independent body, public mood has been changing. What began as menacing popular protests two years ago — inspired by the triumph of uprisings in Tunis, Egypt, Libya and Yemen — has slowly died down into sporadic demonstrations led mainly by the country’s biggest opposition: the Muslim Brotherhood and its political arm the Islamic Action Front (IAF). The coalition of secular and religious parties and movements appears to have faded away.

In the first few months of Jordan’s Arab Spring, the monarchy, tainted by accusations of nepotism, corruption and authoritarianism, appeared to be on the retreat. The king ordered a review of the constitution and accepted some amendments that slightly restricted his powers. He formed a Constitutional Court and an independent commission to oversee elections. The opposition wanted more. They demanded more restrictions on the king’s powers to appoint and sack governments. The king resisted.

But then, as the Syrian crisis got bloodier and more complicated and the ruling Islamists in Tunis and Egypt suffered relapses, the mood in Jordan began to sway. Conservative and moderate forces feared a takeover by Jordan’s Islamists. They saw the chaos in Egypt and Syria as a warning sign. The king saw this too and moved quickly to take the lead once more. He dissolved parliament, ordered new elections and promised a new process in choosing and forming the next government. He published a series of papers on his vision for reform and empowered an anti-corruption commission to take on controversial cases while allowing the courts to sue once-influential figures who were close to him.

In the past six months or more, the king has been to launch a process of rehabilitation that presents him in a different light. He is now a champion of reform and an ardent enemy of corruption. In his latest speech to the deputies he called on the government to launch a “white revolution” to reform itself.

But the road ahead will not be easy or free of obstacles. Late last year, when the king appointed veteran politician Abdallah Ensour as prime minister to oversee the holding of elections, the treasury was almost bankrupt. Over a decade of neo-liberal economic policies had created an unprecedented foreign debt burden — more than $20 billion — and about $2 billion of budget deficit, or 8.2% of the GDP in 2012. Ensour immediately canceled state fuel subsidies, triggering bloody public protests.

While the January elections were free and fair, with a high voter turnout signaling the Jordanians wanted stability, the new legislature was elected using the same notorious single vote system. That law, initiated in 1993, has been accused of being behind the rise of tribalism, the retreat in party presence and in delivering weak and divided parliaments. The king has resisted previous calls to amend the law. Now he wants the current parliament to present new election and party laws. His vision entails strong party participation in future parliaments, where the biggest coalition can form the future government.

In the midst of the current discourse over the composition of the next government, the king has managed to shift the focus from the royal palace and his person to supplemental issues such as whether and how deputies should become ministers. He has survived the Arab Spring and its repercussions—for now. The deputies have been engaged in an extended debate over quotas and whether Jordanians of Palestinian origins should be represented fairly. But this great survival story has many chapters to come. Ensour, who has been chosen by the deputies to form the next government, is committed to raising prices and ending subsidies under an IMF loan agreement. Observers — and the opposition — believe if he executes additional price hikes the streets will rise again. This is almost certain to happen. The king’s gambit has worked so far, but economic pressures, compounded by the presence of about half a million Syrian refugees in Jordan, could very well revive Jordan’s Arab Spring!

Osama Al Sharif is a journalist and political commentator based in Jordan.