King Abdullah II opened the first session of the newly elected parliament with ambitious plans for democratic transformation and enhanced parliamentary government that are unlikely to placate a restive population, writes Danya Greenfield. 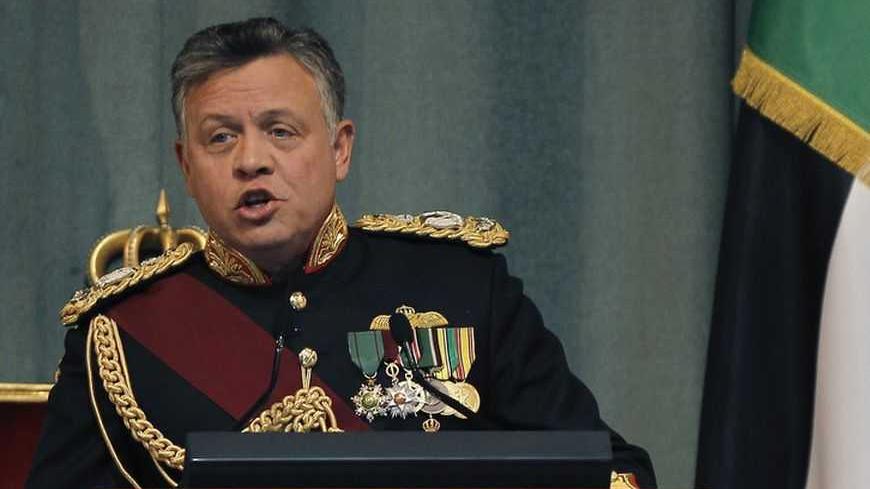 Amid pro-reform street protests in Karak, Irbid and Safwa, on Feb. 10 King Abdullah II opened the first session of the newly elected Jordanian parliament with a speech full of ambitious plans for democratic transformation and enhanced parliamentary government. The king called for a “white revolution” — a government-led technocratic revolution of sorts resulting in enhanced efficiency and improved government services. In appealing to the public, Abdullah called for a bottom-up, grassroots approach to solving problems and pledged transparency and openness in government. He referred to the inauguration of the parliament as a “milestone on the road to democratization and comprehensive reform.”

At present, however, Abdullah has only one leg on which to stand given his track record in turning lofty rhetoric into substantive change. When a new electoral law passed in October 2012, nearly a year after its introduction in parliament, the result disappointed many sectors of the population, including opposition parties, political activists, journalists, civil society leaders and even regime loyalists who had hoped for real change through the reform process championed by Abdullah. The law established a professional, and credible, independent election commission, but preserved the status quo through disproportionate districting that privileges East Bank tribes and discourages candidates from running on political or economic platforms.

Several months prior to the elections, the government passed a restrictive amendment to the Press and Publications Law that has been used to muzzle online media and is widely viewed as a tool of soft containment by the palace. The combination of developments, plus the lack of aggressive prosecution of corruption cases, has led many Jordanians to question the king’s political will and commitment to reform.

The palace tried to cast the parliamentary elections held on Jan. 23 as a barometer of support for the king’s political reform efforts, but since most people cast ballots on the basis of tribal affinity, voter turnout cannot be used as an indicator. When turnout is calculated based on the number of people eligible to vote but who remain unregistered, the rate drops significantly from the government-cited 56% to around 40%, which is lower than the figure for the elections held in 2010. If anything, the relatively low turnout in 2013 would suggest that most Jordanians are disappointed with the gap between the high expectations created by the Arab Spring and the extremely modest and slow change they see around them. While the king and his advisors have said all the right things and delivered compelling and inspiring speeches, for many Jordanians their words remain mere rhetoric and promises yet to be kept.

Abdullah has gained some room for maneuver with the relative success of the elections because of the ultimately lackluster boycott by Jordan’s largest opposition party, the Islamic Action Front (IAF) and restrained opposition due to mounting fears over potential spillover from Syria. The king has an opportunity to capitalize on this precarious opening to regain some of the credibility he has lost and to demonstrate his willingness to devolve some of the monarchy’s power to the parliament and the people. To do so, Abdullah will need to actualize the vision he has so eloquently painted in words and overcome resistance within the circles around him that seek to perpetuate the status quo. Whether he can stay one step ahead in the game will depend on how he addresses five important issues.

Economic frustration, rising costs of basic commodities and rampant corruption have been the main drivers of demonstrations in the past year—and none of these issues have been effectively addressed. In fact, they are likely to get worse. In accordance with an agreement with the International Monetary Fund, the government implemented another fuel price hike on Jan. 31 in exchange for much-needed financial assistance and is slated to increase electricity prices in coming weeks. If the past is any indication, this could prompt another wave of protests with the possibility of turning violent. The increasing number of refugees arriving from Syria, currently estimated at 340,000 in a country of 7 million people, is placing an additional economic burden on state coffers that will ultimately affect Jordanians as well.

King Abdullah has pledged to facilitate a consultative process for selecting the prime minister and forming governments. In the second of a series of discussion papers, Abdullah called for the development of a robust parliamentary system based on active political parties, but since MPs are not elected through parties—which are relatively weak or nonexistent anyway—this consultation will take place through the parliamentary blocs that have coalesced since the election. Recent reports indicate that the royal court chief, Fayez Tarawneh, is negotiating with the newly elected Lower House Speaker, Saad Hayel Srour, regarding who will be the prime minister, but both men are considered old guard conservatives unlikely to make big changes. In addition, rumors abound that the security and intelligence services are interfering with the process. If King Abdullah and his retinue give members of parliament real authority and autonomy to select the next prime minister and form a government without manipulation, it would be a remarkable step forward. If someone is selected from outside the circle of elites that has dominated politics to date, it would be an even more important statement.

The next step in the king’s reform agenda is to empower parliament as an institution and transfer some elements of executive authority to it. If Abdullah decides to be bold in devolving some of his powers, it would be a strong message that his commitment to the greater political empowerment of Jordanian citizens is real. Currently, the parliament has little real authority, and few view it as an institution capable of solving the pressing issues at the top of the people’s agenda — economic hardship and corruption. In his Feb. 10 speech, Abdullah called on parliament to review the electoral system to find ways that promote pluralism, fair representation and fair competition among parties. Of course, this is what the electoral law of 2012 was supposed to do, but instead fell woefully short of accomplishing. If the king pushes for deep and meaningful electoral reforms to be initiated and completed within the next year, it would go a long way toward restoring lost confidence that a legitimate reform process is indeed under way.

The regime will need to engage with the Muslim Brotherhood and the Islamic Action Front to channel their opposition away from street protests and integrate them into the formal political process. Although the Brotherhood was unable to mobilize a large segment of the population to boycott the January elections, this does not signal a drop in its popularity. The IAF is still the largest organized opposition group in the country. The Brotherhood seems intent to let this parliament fail, like those before it, and in the meantime strengthen its grassroots network. Many estimate that if the Brotherhood participated in a fair election with more equitable districting, it would likely receive around 25–30% of the vote. Since IAF sat out the recent elections, a confrontation between the palace and the Brotherhood was only postponed, rather than avoided. It will most likely soon reemerge.

The most unpredictable dynamic that would affect prospects for authentic reform is the kingdom’s stability, which could be shaken by a surge of extremist activity, an act of terror within Jordan’s borders or clashes stemming from Islamist rebel fighters traveling into and out of Syria. Recent reports indicate that Jordan has become a gathering point for the Syrian Islamist opposition, and rebel forces are gaining recruits among Jordanians. A violent eruption in Jordan would have a massive destabilizing effect. On top of that, one can only guess how the palace would react to ensure the security of its citizens. That said, the threat of destabilization from across the border should not be an excuse for inaction. While regional events might reduce the impetus for political reform in the short-term, it cannot be postponed indefinitely.

The combined impact of Syria-related fears and uncertainly about the political transitions in Egypt and Libya have resulted in greater tolerance of the monarchy’s limitations and less willingness among Jordanians to actively oppose the current regime. This has bought Abdullah some breathing room and time, but that will be short-lived. It may appear as though he has solved the equation of how to retain his grip on power, but rumblings under the surface have not disappeared. If the king and his supporters cede more decision-making authority to the parliament, create a more equitable electoral system, aggressively prosecute corrupt government officials and reduce ostentatious displays by palace loyalists, then Jordanians might be convinced that Abdullah has the political will to transform his country. Without such moves, the populace is likely to consider the entire current endeavor a charade and mere maneuvering to placate the West.

Some observers believe reform from above remains possible in Jordan, but the king’s reform agenda has yet to fundamentally change the balance of power or widen the political playing field. Until this situation changes, Jordan is likely to witness an increasing number of popular protests that will also grown in size and intensity. If further economic distress coalesces along with East Bank opposition movements, which are starting to organize and plan strategically, the monarchy’s monopoly of power might finally face a real challenge.

Danya Greenfield is deputy director of the Rafik Hariri Center for the Middle East at the Atlantic Council. During the Jan. 23 Jordanian elections, she took part in the observer mission of the National Democratic Institute. In October 2012, she participated in a preelection assessment with the International Republican Institute.