Why many Jordanians have little stomach for upcoming elections 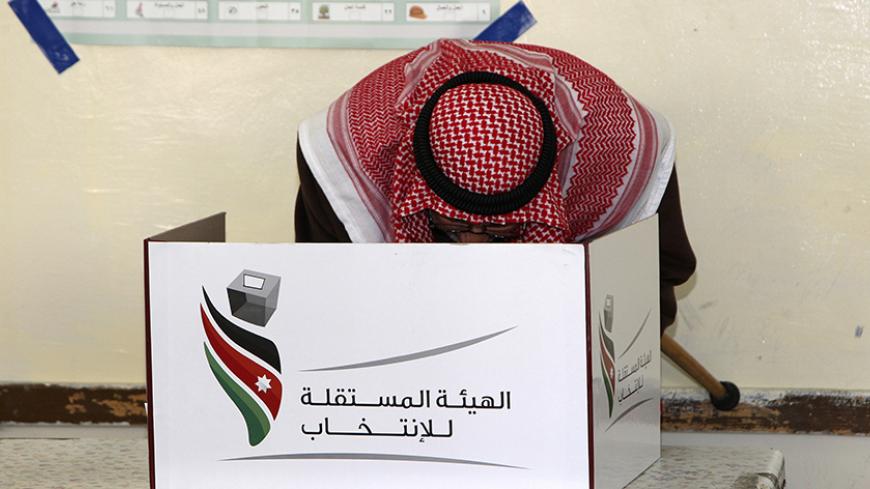 AMMAN, Jordan — An astounding 87% of Jordanians said their parliament had not made even one praiseworthy accomplishment during the 2013-16 term, according to an April poll conducted by the International Republican Institute. Faced with such public skepticism, the Jordanian government is campaigning to increase voter turnout for the country's most important elections, to be held in two months.

The Independent Election Commission has launched a new website in Arabic and in English and has taken to the streets to explain the voting list system enacted in March in a new election law that did away with the previous one-person, one-vote system. “The King, the government and the Independent Election Committee have done all that is possible to prepare the groundwork for the new elections,” said a June 12 editorial in the Jordan Times. Nonetheless, with the Sept. 20 contest approaching, former Foreign Minister Marwan Muasher told Al-Monitor, “There is a noticeable indifference toward the elections.”

The parliament’s May 2 ratification of constitutional amendments was a worrying development for citizens who want an independent legislative branch. The new amendments gave the king absolute power to appoint the head of the paramilitary police force, members of the constitutional court and the crown prince. Before the May 2 decision, the king required the prime minister and certain ministers to recommend these critical nominees.

The changes were passed overwhelmingly in only about two weeks by 123 members of parliament out of 142 who attended the session, and with little public debate. Rana Sabbagh, the director of the Arab Reporters for Investigative Journalism and former editor-in-chief of the Jordan Times, told Al-Monitor that many Jordanians view parliament as being a “rubber stamp” for the king’s policies and not operating as a strong independent body monitoring the executive branch. “Jordanians don’t believe that this parliament is actually stopping wrongdoing in the system,” she said.

A poll by the Civil Coalition for Monitoring Elections published July 10 said a larger share of Jordanians (39.5%) intend to “boycott” the elections than those who plan to vote (31.5%). Suspicions of dishonesty in the legislative branch have fueled mistrust about the elections.

In April, the Jordan Times reported that hundreds of parliamentarians' relatives had been appointed administrators at the legislature. “MPs cannot risk rejecting ‘wasta’ [obtaining privileges through connections] requests from people in their constituencies, because they fear losing them as voters,” said Tarek Khoury, a parliamentarian. “This is a big problem for the lower house.” With representatives themselves acknowledging their unethical behavior, it is no surprise that citizens are less than enthusiastic about taking the time to legitimize the legislative branch.

Previous instances of electoral fraud are also behind Jordanians questioning the utility of voting in September and staying away from the polls. In 2007, a former intelligence chief acknowledged falsifying parliamentary election results. In addition, the newspaper Al-Arab al-Youm exposed multiple cases of vote buying in the 2010 elections, with candidates’ campaigns offering citizens more than 100 Jordanian dinars (about $140) per vote. During the last parliamentary contest, in 2013, the Muslim Brotherhood accused the government of fraud.

Despite these issues, Sabbagh noted that given the current violence and turmoil across the region, there are voices in Jordan who believe that holding elections is a positive sign for the kingdom. The elections might benefit from the fact that the original Muslim Brotherhood's political wing, the Islamic Action Front (IAF), is participating this year after boycotting the previous races in 2010 and 2013. The IAF's decision to compete in September lends legitimacy to the elections.

Given the challenging financial conditions facing Jordanians, it is difficult to divorce the weak economy from attitudes about the parliament and therefore the elections. According to the International Labor Organization, youth unemployment stands at approximately 28%, twice the international average. The government’s decision in June to raise fuel prices has further strained the resources of many with already limited means.

“People feel manipulated, and they see [elections] as repetition of the same thing and done for someone else’s benefit,” Naseem Tarawnah, author of the popular Jordanian political blog Black Iris, told Al-Monitor. Because economic conditions are not improving, many in the kingdom view regular elections as “putting lipstick on the pig and dressing it up in different ways,” Tarawnah said. With average Jordanians struggling to support their families, participating in elections that appear to have a limited impact on their daily lives is not a priority.

Mohammad Momani, the minister of state for media affairs and government spokesman, declined Al-Monitor’s request for comment on the public’s attitude toward the elections.

Sitting at a cafe near the University of Jordan, student Abdalshaheed Abu-Khalil said he would not vote in the September race. “The elections are a big show,” he remarked. “The last parliament failed.” Lana Abu-Joudeh, however, is more hopeful. She explained to Al-Monitor, “It is important for all of us to be part of elections because we want Jordan to be a better place to live.” She said that while the last elections were “dishonest,” she nonetheless intends to vote in September.

King Abdullah II touted the new electoral legislation as a “milestone in our national reform process.” There appears to be a major divide, however, in how the Royal Palace and the people view the law. According to the International Republican Institute poll, 58% of Jordanians know nothing about the legislation, which requires candidates to run on multi-candidate lists. Voters select one list and then select candidates from that list. This process replaces the single, non-transferable vote system — “sawt wahid” or one vote — which had reduced opposition parties’ representation after the 1989 election in favor of tribal loyalists. In 1989, the Muslim Brotherhood and its allies won about one-third of the contested seats and became the largest parliamentary bloc, an unwelcome development for the monarchy. The Sawt wahid system created heavily gerrymandered districts that were disadvantageous for the urban areas where many Jordanian-Palestinians who supported the Brotherhood lived.

Although the purpose of the legislation was to create strong parliamentary political blocs, Muasher was cautious about the bill’s potential for success. “It is clear in most districts that lists are not going to be formed according to ideology but rather by tribal affiliation,” Muasher said.

Some of the attacks against the legislative branch are rooted in the country’s restrictions on political speech. “You can’t criticize the king and the upper echelons of power,” Tarawnah said. Therefore the legislative branch becomes one of the few government institutions that citizens can attack, causing “parliament to be the scapegoat,” he added.

The ongoing economic problems, previous cases of electoral fraud and consolidation of the king’s power have pushed many Jordanians to consider staying away from the ballot box in September. “People feel that parliament is not an effective decision maker or a voice that is representative of most Jordanians,” Muasher noted. “There is a big trust gap between citizens and the government in Jordan.”