The Jordanian government is supporting a Muslim Brotherhood breakaway society, thus deepening the divide within the group in Jordan. 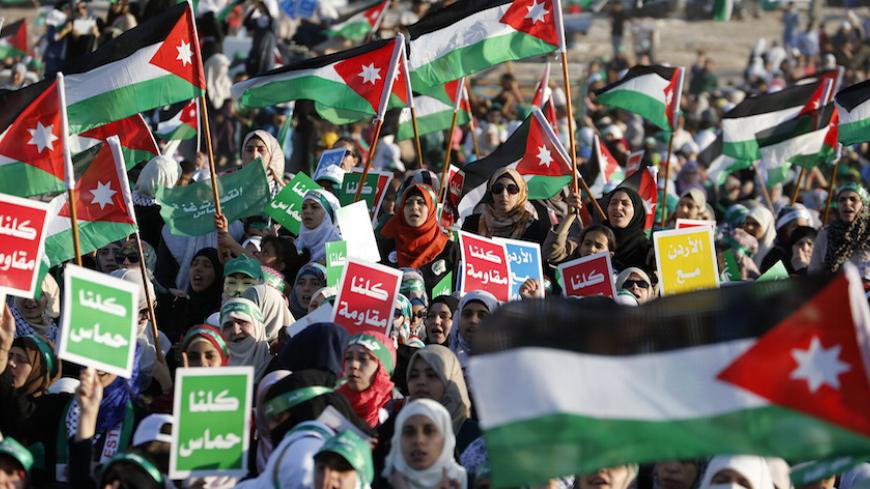 Supporters of the Jordanian Muslim Brotherhood take part in a rally in Amman, celebrating what Hamas say is its victory in Gaza, Aug. 29, 2014. - REUTERS/Muhammad Hamed

A possible confrontation between the Muslim Brotherhood group in Jordan and the government was avoided through an uneasy truce, with both parties opting to take a step back in preparation for their next move. On April 30, a day before the group was to hold a public rally in an Amman suburb to mark seven decades of existence, the leadership acquiesced to government warnings and postponed the event indefinitely.

A last-minute meeting between representatives of the group and the minister of interior convinced the Muslim Brotherhood leadership that the government was serious about its decision to ban the rally and that it would use all available means to prevent it from taking place. But what is particularly interesting is that the governor of Amman, who delivered a stern message to the group ordering it to stop the event, also said that the new Brotherhood had applied for permission using the name and insignia of an existing society. This was the closest the government has ever come to hinting that the 70-year-old group was now illegal or unlicensed.

The tussle started when breakaway members of the group applied for registration at the Ministry of Social Development as a society under the name of the Muslim Brotherhood. On March 3, the Interior Ministry approved their application and the society became a legal organ, despite protests by the larger Muslim Brotherhood group. The new society, whose 30 members had been dismissed from the group earlier, claimed that it was rectifying the legal status of the Muslim Brotherhood in Jordan. Since its registration, the society started presenting itself as the only legitimate body with that name. It chose former Muslim Brotherhood leader Abdul Majid Thuneibat as overseer. Most of those who defected to the new society were members of a reformist initiative called Zamzam. They had tried to impose a reform agenda on the group but were rebuffed by the hawkish leadership. Most of those associated with Zamzam initiative, including Thuneibat, were expelled from the group in February.

Even though the government had insisted that it was not taking sides in the recent split, it has become clear that the new society had found an ally in the government of Prime Minister Abdullah Ensour. Thuneibat insists that his objective is to sever ties with “the terrorist group in Egypt” and to license his society as a Jordanian body. The Muslim Brotherhood says it was licensed twice in its history, once in 1946 and a second time in 1953. It argues that without such licensing, it would not have managed to participate in Jordan’s social and political life for almost 70 years.

For decades, the Muslim Brotherhood group was seen as a close ally of the regime, especially in the 1950s and 1960s, when Jordan was a target of Egyptian President Gamal Abdul Nasser’s Arab socialist dogma. It participated in a number of legislative elections in the 1990s through its political arm, the Islamic Action Front, and was recognized as the most influential political party in Jordan. But when the election law was amended in 1993, the movement decided to boycott future elections in protest. When it participated in the 2007 contest, it accused the government of rigging the results. During the Arab Spring in 2011, the movement emerged as the leading opposition group, allying itself temporarily with nationalist and leftist parties and coalitions. When King Abdullah called for a national dialogue panel in March 2011 to push for reform, the movement opted to stay out. Such hard-line reactions, which were resisted by the moderate flank within the group, deepened distrust between the government and the movement.

Political analyst Orieb al-Rintawi says the group's internal struggle, which led to the recent split, is actually over priorities and identities. He told Al-Monitor, “What the media does not tell you is that the power struggle is between two distinct groups [East Bank Jordanians and Jordanians of Palestinian origin], and the government has taken sides, although the new society has no grass-roots support.”

The 2013 upset of the Muslim Brotherhood in Egypt paved the way for the recent tug-of-war between the movement in Jordan and the government. But the breakaway society lacks popular support, and even the moderates within the group decided to boycott it. The proposed rally was supposed to be a show of force, underling the fact that the Muslim Brotherhood remains the strongest and most influential Islamist organization on Jordanian soil. “The banning of its rally helped present it as an underdog,” Rintawi said.

But in spite of the group’s recent setbacks, it remains a major player in local politics. On May 10, a coalition of Islamist candidates claimed all the seats in the Engineers Association elections, defeating leftists and nationalist contenders.

Commentator on Islamist issues Hussein al-Rawashdeh told Al-Monitor that the recent split will not lead to the demise of the Muslim Brotherhood in Jordan. “They are still popular and the more they are persecuted by the government, the more support it will generate for them,” he said. In his view, the government wants to weaken the group but has failed to understand that the Muslim Brotherhood in Jordan is a demographic container for all Jordanians. “The regime needs the group to preserve this uniting demographic factor,” Rawashdeh said.

But the coming days may end the current standoff and reignite the crisis. The new society has threatened to go to court asking for the transfer of the group’s multimillion-dollar assets to its name as the legitimate representative of the Muslim Brotherhood. The group will not stand down if this scenario plays out. Whether the government will allow the society to make such move remains to be seen. If the society wins its case, it will mean that the group is officially banned. Commentators have called on the government and the group’s leadership to exhibit wisdom and caution. “At a time when the country is fighting Islamist extremists in Syria and Iraq, the weakening of the Muslim Brotherhood will drive young Jordanians to embrace radical jihadist ideas,” Rintawi said.

Siding with the small, unpopular new society may backfire and eventually hurt the government. The group will have major elections in June, and there are signs that the moderate flank will try to propose a middle ground. “It would be best for the government to sit this one out and wait for the group to correct its own course,” Rawashdeh said.