Is Hamas reconsidering its ties and policies?

Hamas might be issuing a document soon detailing its stances toward various aspects of the Palestinian cause, as well as its ties with local parties and foreign countries. 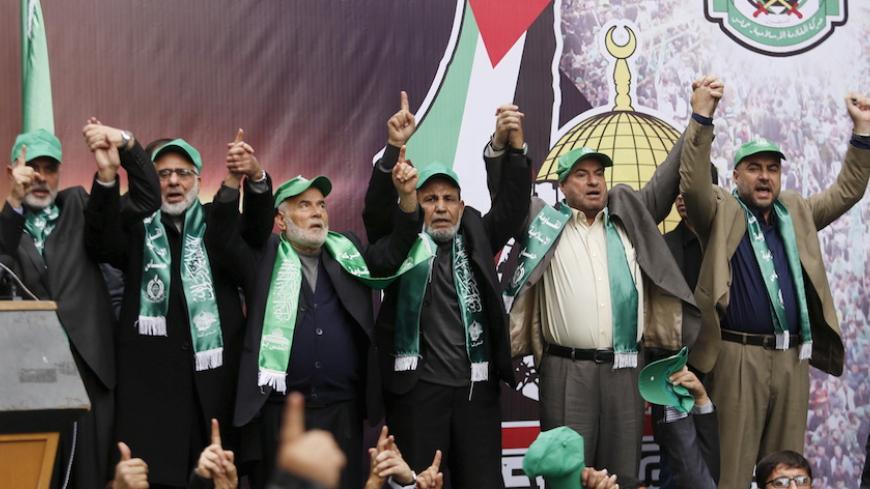 A document that hasn't been published yet is causing widespread speculation among Palestinians about Hamas' plans for the future. Since late August, Palestinian and Arab media have been talking about a new political document that Hamas will be issuing "soon."

Al-Khaleej Online said Sept. 14 that at the end of the year, Hamas will issue a document that will reflect a shift in its ideology. Al-Khaleej added that Hamas leaders and a group of Palestinian and Arab intellectuals contributed to the draft, which still must be submitted to its political bureau for approval.

However, Hamas leader Salah Bardawil told Al-Quds news Sept. 17 that what is being said about a new Hamas document is exaggerated, because political documents are usually kept secret and only circulate within Hamas circles. He also said Hamas would never renounce its nationalist stance, namely, “All of Palestine is for the Palestinian people. It rejects recognizing Israel and believes Jerusalem should remain the capital for the Palestinian people.”

Al-Quds Press reported Aug. 29 that according to "informed sources," Hamas recently finished drafting a new document that includes its stances toward the various aspects of the Palestinian cause and the Israeli-Palestinian conflict, its ties with Palestinian factions, and its positions toward Arab, Islamic and foreign countries. The sources did not say whether the new document would serve as a supplement or a substitute for Hamas' 1988 charter.

Yousef Rizqa, a former information minister in the Hamas government and a political adviser to the deputy head of Hamas' political bureau, Ismail Haniyeh, told Al-Monitor, “The new document reflects Hamas’ political and intellectual maturity and is the product of its experience over the years, since its inception in late 1987. The document does not mean that Hamas has a new strategy or has made concessions in its political positions. Rather, it is the product of its many political experiments, following important phases such as the first intifada of 1987, the second intifada of 2000, its participation in the 2006 legislative elections, and facing the three Israeli wars on Gaza in 2008, 2012 and 2014.”

He added that the new document focuses on detailed political principles and could be a guide for Hamas policy on the ground, and for internal and external ties. Perhaps, he said, Hamas' conduct on the ground has gone beyond its 1988 charter, which included general ideological slogans and is no longer binding in terms of its political positions. This is a sign pointing to Hamas’ maturity, he said.

In 2006, Hamas issued a platform for the legislative elections, where it revealed its stances regarding education, health and anti-corruption issues. This platform was viewed as an official document presented by Hamas to the electorate. In 2014, Rizqa issued a research paper, dubbed Hamas’ Political Vision, where he gave great attention to issues related to citizenship, human rights, equality and freedom of expression. Although the research paper is not an official Hamas document, it describes the movement's internal discussions.

Khaled al-Hroub, a liberal arts professor at Northwestern University in Qatar, wrote the first book on Hamas, in 1996. He told Al-Monitor, “If Hamas wants to lead the Palestinian people, it must launch political initiatives on the ground, rather than issuing documents that would only cause media hype for days and weeks. The world wants to view Hamas’ conduct, rather than documents. Hamas is in an unenviable position under the Israeli blockade and Arab and international pressure, a large part of which is due to its charter, which has become a burden given the serious positions it includes — such as hatred against the Jews for the fact that they are Jews and not as occupiers of Palestine.”

According to an Al-Arab interview Sept. 18 with Ahmed Yousef, the head of the House of Wisdom Institute for Conflict Resolution & Governance in Gaza, Hamas is expected to introduce a document "in the coming months." The declaration will address Hamas' vision regarding the region’s developments, including its ties with neighboring countries, the Palestine Liberation Organization, the Palestinian Authority and the Palestinian political system of governance, Yousef said. It will reflect how times have changed since the 1988 charter was written and may use flexible language and speak of a political partnership with Palestinian factions. As Hamas has become an active movement on the local and regional scenes, it may have to develop a realistic political vision, he added.

Yahya Moussa, a Hamas leader and chairman of the Palestinian Legislative Council's Oversight Committee, told Al-Monitor, “The political changes in the region and the world require that Hamas keep pace, rectify its performance on the ground and secure high-level positions in the Palestinian political arena to influence it. This would make it convenient for Hamas to issue a political document, as long as it does not affect the movement’s fundamentals, such as the liberation of Palestine, to not recognize Israel, and the refugees’ return.”

He added, “The new Hamas political document is a response to political developments. It is more like a comprehensive political declaration explaining its policies and objectives to the public. While the Hamas charter consisted of general rules issued when it began, it has become a historical document and a part of an earlier stage.”

The timing of the new political document may not be spontaneous. Hamas seems to be reshuffling its regional and international ties and standing at an equal distance from different countries. It has a semi-alliance with Qatar and Turkey, and it is trying to restore lukewarm ties with Iran and Egypt and break the international embargo that has been imposed on Gaza since Hamas won the 2006 legislative elections. Many observers expect a document that will include all of these issues in detail.

Abdel Sattar Qassem, a political science professor at An-Najah National University in Nablus, told Al-Monitor, “The new Hamas document may express the movement’s desire to adapt to the region’s political developments, provide a moderate Islamic discourse to move away from Salafi groups and include orientations that would make [Hamas] acceptable for the international community. This would include easing its hostile discourse toward Israel so that the Europeans and Americans realize that talk with Hamas is beneficial. The new document may be a shift from an ideological to a political vocabulary, but I fear that it would be a prelude for Hamas to follow in the footsteps of the PLO, which has reduced its political standards."

It is still unknown whether Hamas will issue its new political document or if it will remain a secret. Yet hopes that the document will bring about positive change in regional and international positions toward Hamas may collide with international demands that go beyond the document, such as recognizing Israel and disarming the movement, which Hamas has categorically categorically rejected thus far.