Hamas recently asked for, and received, critical analyses of its course over the past three decades, as well as suggestions on how to proceed from here. 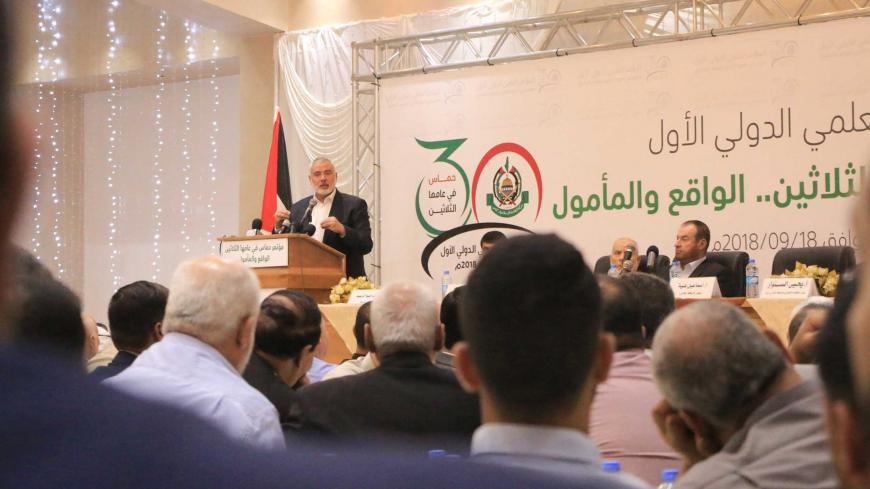 GAZA CITY, Gaza Strip — After 30-plus years in existence, Hamas is sizing itself up and examining its performance. The Palestinian movement has solicited lots of opinions and advice, but it remains to be seen if it has any realistic hope of implementing its conclusions.

The group held a conference Sept. 18 titled "Hamas: 30 Years on, Reality and Hopes.” About 1,200 movement leaders and cadres, as well as thinkers and researchers, participated in the conference to assess the movement in all areas. They laid out a vision aimed at improving Hamas’ performance.

The conference discussed 38 research papers on how Hamas has fared since its inception in areas such as science, politics, advocacy, social issues, and military and media matters. Also, it reviewed Hamas’ experiences since 2007. Hamas won the Palestinian legislative elections held in 2006 and managed to militarily control the Gaza Strip in mid-2007 in the wake of armed conflicts with rival party Fatah and Palestinian security services.

The movement celebrated its 30th anniversary in December.

Hamas launched in 1987 following the outbreak of the first Palestinian intifada against the Israeli army in the West Bank and the Gaza Strip. It established its charter in 1988, but only last year issued an official policy document, which is more realistic than the charter. The charter is rather religious, while the 2017 document has a political and legal character, reflecting the maturity and evolution of the political movement’s thought.

“Just like any political organization or party in the world, Hamas needed to evaluate its performance after a certain period of time … and an [objective] assessment was in order," Atallah Abu al-Sabh, a Hamas political bureau member and head of the conference preparatory committee, told Al-Monitor.

He pointed out that Hamas wanted to hear the opinions of researchers and specialists from both inside and outside the movement about the group's performance in all fields. Hamas will publish several of the submitted research papers before the end of the year by compiling them into a book. Sabh said Hamas expects to convene similar conferences in the future.

His committee will refer the presented recommendations to the movement’s political bureau to be examined thoroughly, and Hamas expects many to be implemented.

Many of the recommendations included criticism of the movement's performance, especially in regard to its international relations. Researchers said Hamas needs to develop such relations, especially with countries that believe in the Palestinian right to resist the Israeli occupation. Researchers called on Hamas to support and enhance international boycott campaigns while building cooperative networks with anti-racist popular movements around the world.

They said the movement's International Relations Bureau needs to be restructured, and they stressed the need for Hamas to adjust its foreign policy and rhetoric.

Others recommended that Hamas develop an intellectual approach to handling challenges while still enforcing a modern security policy to take on crime, extremism and confrontations with Israel.

Researchers highlighted the need to work on ending the division between Hamas and Fatah and conduct an in-depth study on political and religious issues, including negotiations with Israel.

Of note, Hamas began indirect negotiations with Israel, mediated by Egypt, the United Nations and Qatar, in mid-July 2018 in a bid to reach a truce in exchange for Israel lifting its siege on Gaza. This raised the ire of the Palestinian Authority (PA), which was left out of the negotiations. The talks stumbled when Palestinian President Mahmoud Abbas threatened to stop funding Gaza if Hamas signed any agreement without the PLO.

However, according to a poll conducted by the Palestinian Center for Policy and Survey Research in Ramallah published Sept. 20, 55% of the polled Palestinians support Hamas signing a long-term truce with Israel, even in the absence of an internal reconciliation.

Hatem Abu Zaida, director of the Al-Mustaqbal Research Center and one of the conference participants, told Al-Monitor Hamas deserves credit for being the first faction to hold such an event. "The conference highlighted the negative and positive steps of the movement in a bid to draw conclusions and lay out a vision for the future.”

Abu Zaida, who submitted a paper titled “The US Position on Hamas,” said his research concludes there has been a state of dissonance between successive US administrations and Hamas since its inception. He pointed out that the United States deems Hamas a terrorist movement and has placed it on the terrorism list it issued in 1997 and reissued in 2001.

He said the prospects of establishing a communication channel between the US administration and Hamas in the near future are dim unless the latter recognizes the legitimate international resolutions regarding the Palestinian cause, stops fighting Israel and recognizes Israel as a state for Israelis.

Since its takeover of the Gaza Strip in 2007, Hamas has fought three wars against Israel. While dozens of Israelis were killed during those wars, Israel killed and injured thousands of Palestinians and destroyed Gaza's infrastructure, economy, government institutions and thousands of homes.

On Aug. 13, Israeli Defense Minister Avigdor Liberman threatened that it's only a matter of time until the next military confrontation with Hamas.

Mukhaimer Abu Saada, a political science professor at Al-Azhar University in Gaza, told Al-Monitor the most important thing that could come out of the conference is if Hamas actually heeds and implements the recommendations it received. He added, however, that Hamas isn't likely to fully implement the conference's conclusions. He noted that the conference was the first of its kind for Hamas, which is facing political, military and financial bottlenecks as it fails to break its isolation.

The question arises as to the extent to which Hamas is able to apply the research in the hopes of finding a way out of the challenges it faces amid the Israeli siege on Gaza and the movement’s worsening relations with Arab regimes since the setbacks experienced during the Arab Spring revolutions.