The declaration by Public Security Minister Gilad Erdan about worsening Palestinian prisoners’ conditions would only generate unrest in prisons and on the Palestinian street. 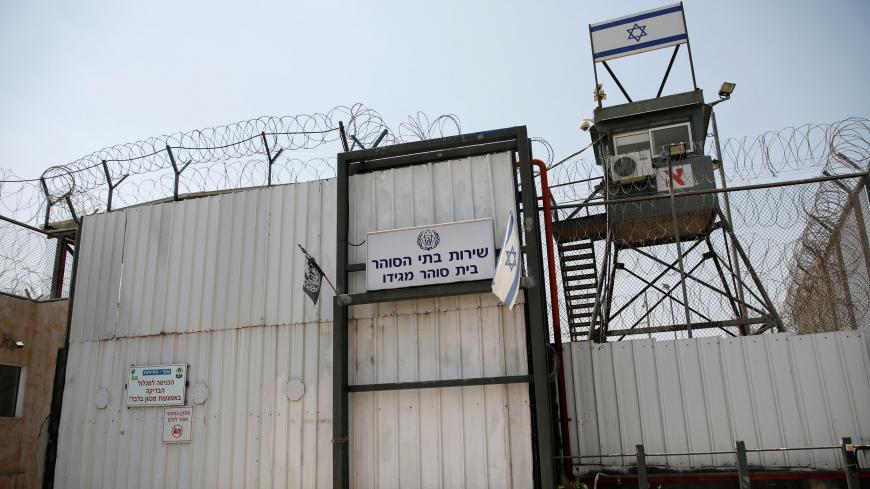 An Israeli flag is seen next to the gate of Megiddo Prison in northern Israel, July 24, 2018. - REUTERS/Amir Cohen

Minister of Public Security Gilad Erdan announced Jan. 2 a series of new restrictions on Palestinians serving time in Israeli prisons for security-related offenses. Erdan convened a news conference to report that he was accepting the recommendations of a team appointed to examine the conditions of Palestinian prisoners, and planned to implement them. “The party is over,” Erdan declared. Among the new measures are limiting the stipends provided by the Palestinian Authority (PA) to prisoners for the purchase of goods in prison canteens (coffee, tea, sugar, cigarettes, etc.) and significantly reducing their water consumption. Erdan claimed the prisoners use “an insane” amount of water in what is essentially a form of protest against the state.

One of the more significant measures he announced, which could significantly alter the Palestinian inmates’ incarceration, was to revoke what he called “the autonomy” they enjoy. Erdan was referring to long-standing arrangements allowing prison authorities to effectively deal with the record number of Palestinians jailed in the first Palestinian uprising (1987-1993) and the second intifada (2000-2005).

The decisions adopted over the years by the Israel Prison Service (IPS) in consultation with the Shin Bet domestic security agency were designed to ensure a calm routine within the wings housing thousands of Palestinians. With this in mind, the authorities maintained a strict separation between members of the Islamist Hamas movement and those of the Fatah movement. The separation may be convenient for the prisoners themselves, but it is also in the interests of the IPS in order to avoid power struggles between the two rival organizations influenced by the highly charged relationship between the sides outside the prison walls. Hamas prisoners are considered more militant than those belonging to Fatah and their lifestyle as strictly observant Muslims is different.

Israel instituted the separation during the first intifada following a wave of Hamas member arrests. The decision was adopted in consultation with Fatah prisoner leaders, who saw the new inmates as undesirable interlopers. It is therefore unclear what Erdan hopes to achieve by revoking the separation and how the IPS will deal with this order from above that will oblige jailers to intervene in clashes likely to break out between the rival groups.

Another measure unlikely to be welcomed by the prison authorities is annulling the “prisoner spokesman” position, held by prisoners elected democratically by fellow inmates to lead them. (He is dubbed “spokesman” by the prisoners so as not inflate his status vis-a-vis the Israeli authorities.) The spokesmen conduct all contacts with the prison authorities and ensure all the inmates have work. They also stay in touch with prisoner leaders in other prisons and pass messages among inmates in different facilities, usually through prisoner transfers.

Over the years, I have had the opportunity to follow the role played by prisoner leaders and to observe their influence on the decision-making process of successive Fatah and Hamas leaders on the outside. I have interviewed dozens of prisoner leaders over the years, who all told the same story. They described how the Israeli-Palestinian peace process germinated within the prison walls long before it was signed at the White House in 1993. In the early 1990s, notable prisoner leaders such as Hisham Abd-El Razek, Qadura Fares, Sufian Abu Zaida, Tewfiq Abu Husa, Samir Mashharawi and Ihab Al-Askar concluded that negotiations with Israel were possible.

“It began when we started getting to know the Israeli jailers and realized they were human beings like us and not as we imagined them over the years. We understood that they, too, have daily concerns such as kids, family and making a living,” Abd-El Razek once told me. The senior Fatah figure was jailed for life in 1974 after detonating a car bomb in the town of Rishon Lezion. The car erupted in flames before he had time to abandon it and he sustained severe burns. In prison, he underwent a transformation from terrorist into peace activist. He was released from Israel’s Gaza prison within the framework of the Israeli-Palestinian Oslo Accord and participated in hundreds of joint peace activities in Israel and the Gaza Strip until Hamas took control of the enclave in 2007.

The prisoner leaders are disciples of Abu Ali Shahin, known as “the father” of Palestinian prisoners. He was the one to suggest electing a “prisoner spokesman” following a series of hunger strikes by inmates in the 1970s and 1980s. Abu Shahin was a close friend of the late PLO leader Yasser Arafat. He was arrested after the 1967 Six-Day War when he was sent to set up resistance activities in the Gaza Strip. He used toilet paper on which to write the essential elements of prison survival. His densely written, penciled notes have served as the bible of successive generations of Palestinian prisoners. In an interview with him for my book “Eyeless in Gaza" he recounted how he established Hebrew-language prison classes, how he insisted that all inmates participate in sports activity “for the sake of body and soul” and how he instituted employment for prisoners to prevent them from engaging in clashes and brawls among themselves.

His legacy has provided Israeli prison authorities with a relatively calm Palestinian population. The IPS finds it convenient to convey messages and instructions through the various prisoner leaders who command the obedience of those who elected them.

The Shin Bet therefore opposes Erdan’s planned moves, which could stir up trouble among the prison population. Erdan, however, is not to be deterred. “Sometimes, security organizations adopt wide safety margins for their own sake. We must not be deterred by any attempt to scare us,” he said in response to a question at the news conference.

Erdan, who has a record of unsubstantiated declarations and controversial decisions, appears to be ignoring the security agency’s warnings mostly to boost his eroding status within the Likud Party.

The Palestinian inmates do not “party” in Israeli jails; they are placed under strict and closely monitored conditions. The many showers they take are meant to ward off disease, the canteen purchases are a privilege to be revoked from troublemakers and the Fatah-Hamas separation has long benefitted Israel’s security. The autonomy that Erdan seeks to rescind does not improve the conditions of Palestinian prisoners to any significant degree; it mostly helps prison management to maintain order and discipline and avoid riots and other troubles.

But what does Erdan care? As long as he comes across as a hard-liner on Hamas and Fatah when the Likud’s Central Committee votes on the party’s election candidates in the upcoming primaries.