Palestinians reject new measures taken against them in Israeli prisons, most notably the installation of electronic jamming devices suspected of causing cancer. 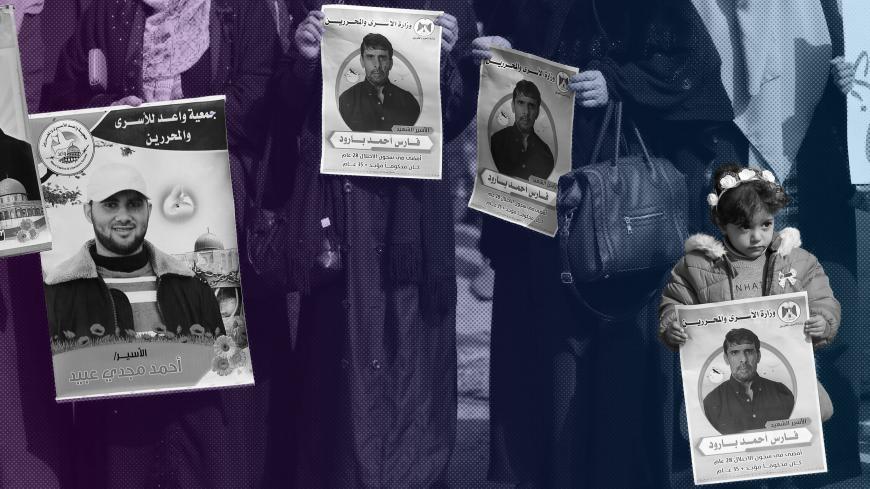 On March 24, violent skirmishes flared up between prisoners and guards in Negev prison's Section 4. The Metzada unit — the IPS hostage rescue and special operations unit — raided the section, fought with prisoners and fired tear gas.

The prisoners stabbed two jailers with sharp objects. Dozens of prisoners were wounded. Seven of them were transferred to Soroka Hospital for treatment, including two who were seriously injured.

The next day, the Metzada unit raided the prisons of Ramon, Nafha, Eshel and Gilboa. This prompted the Palestinian prisoner leaders, elected by the prison population, to announce March 25 that they were dissolving all prisoners’ regulatory committees and canceling prisoners’ representation inside Israeli jails. These committees negotiate and communicate with the IPS on behalf of the prisoners and represent prisoners' decision-making authority. This lack of leadership will make it more difficult to control prisoners and places them in direct confrontation with IPS forces. The leadership also said it held the prison administration fully responsible for the situation as of March 26.

The leadership had made a similar move Feb. 28 to confront IPS measures by announcing the temporary dissolution of the regulatory committees inside the Negev, Nafha, Ramon and Eshel prisons.

On March 22, the leadership issued a statement calling on prisoners to “be alert and ready” for a new phase of confrontation against the measures the prison administration is trying to impose.

On March 24, the leadership said in a statement that it is planning an open hunger strike in Israeli jails. The statement did not set a specific date for the strike. But the Hurryyat Center for Defense of Liberties and Civil Rights said in a press statement March 25 that prisoners would start a hunger strike April 7.

Palestinian prisoners had upped the level of confrontation with the administration since the beginning of this year, following a string of repressive measures. On Feb. 13, the Negev prison administration set up jamming devices in a number of prison wings to block the use of smuggled cellphones by prisoners. This measure has been applied in other Israeli prisons.

Palestinian prisoners say they fear the radiation emitted by these devices can lead to genetic cell deformities and cancer. They have complained of headaches and fainting.

Installing the jammers was one recommendation issued by the so-called Erdan Committee. On Jan. 2, Israeli Minister of Public Security Gilad Erdan set up this committee to put forward measures Israel could take to crack down on prisoners. The committee recommended, among other things, depriving prisoners of their autonomy in prisons, housing rival Fatah and Hamas prisoners in the same areas and not allowing prisoners to communally prepare their own food.

On March 19, 90 prisoners affiliated with the Palestinian Islamic Jihad and Hamas factions in Ramon prison were moved from Section 7 to Section 1, which was fitted with the jamming devices. To protest, prisoners set fires in 10 cells in Section 1. The IPS resorted to the Metzada unit, which reportedly assaulted the prisoners and injured 40 of them.

Following the fires, a Ramon Prison spokesperson told Israel media, "The prison was ready for the fire and it was therefore quickly extinguished," adding, "The innmates were informed that such actions would not be tolerated. We will continue to maintain our control over our prisons and disrupt any threat to Israel's security."

Haaretz, quoting security officials, reported that while the Israeli army supported IPS plans to move Hamas prisoners, "They warned that this was a sensitive time and that the move could lead to escalated tensions and violence."

The Negev prison also witnessed tension previously. On Feb. 19, Palestinian prisoner Ibrahim Natsha attempted to torch himself during a confrontation with guards over repressive measures. He sustained slight injuries.

The PLO's Commission on Detainees' Affairs said in a March 19 statement that the prisoners were setting up a strategy to counter repressive measures. The statement denounced the prison administration’s “continued installation of carcinogenic jammers in a number of detention centers; repression; inspection and isolation measures; deliberate medical negligence; mass detentions; abuse of female prisoners and children; and issuance of racist laws against detainees.”

Qadura Fares, head of the nongovernmental organization Palestinian Prisoners Society (PPS), spoke with Al-Monitor about an apparent Israeli inclination toward greater militancy in its legislative, political and security establishment, mainly against Palestinian prisoners.

“The Israeli political parties are escalating their rhetoric and competing to enact oppressive racist laws toward prisoners. This is an internal Israeli policy maneuver aimed to attract voters,” he said. He affirmed, however, that the measures Israel intends to impose on Palestinian prisoners must be approved by the PPS. “Prisoners have some cards they can play to confront the measures and policies that harm them, most notably declaring an open hunger strike.”

Fares went on, “The situation in the prisons is tense and there are no solutions in sight, especially since the IPS is acting under the instructions of the Israeli Ministry of Public Security and political parties. The IPS is bound by these instructions.”

He also pointed to “major changes in the offing if the IPS does not reconsider measures of isolating and moving inmates and installing carcinogenic jamming devices."

"The prisoners will make a series of security disobedience decisions," he said. "If the IPS doesn't renounce its measures, Palestinian prisoners from all factions will go on strike.”

Ali al-Maghrabi, spokesman for Hamas’ Office of Prisoners’ Affairs, told Al-Monitor that the dissolution of all regulatory committees would escalate the situation to a point of no return. “We currently stand at a crossroads. Either IPS offers solutions to this crisis, or things are heading toward escalation.”

Maghrabi said, “Prisoners are expected to stage a hunger strike. The heads of factions and regulatory committees would begin first for three days. If no solutions are offered, the strike will be extended to more than 1,500 prisoners and will continue until the prison administration meets the inmates’ demands.”

He pointed out that prisoners as a group could refuse water. “This would set a precedent in prisoners’ collective action. Some prisoners had individually refused water. A collective decision may also be made, among others, to refuse breaks in open air.”

Maghrabi also commented on the jamming devices being used to disrupt communications. “IPS reduced visits, prohibited entry of clothing items, and cut back the monthly amount that family members can deposit so prisoners can purchase products in the canteen — from 1,200 shekels [$332] to 400 shekels [$110]. This is in addition to other measures implemented on Erdan Committee recommendations."

He added, “An open hunger strike in prisons is sure to start any time, from now until April 17, which marks the Day of the Palestinian Prisoner."