The senior leadership of Hamas prisoners said the prisoners have ended their hunger strike after receiving assurances from the Israel Prison Service to stop using cellphone jamming devices, but Israeli media portray the strike as having little effect. 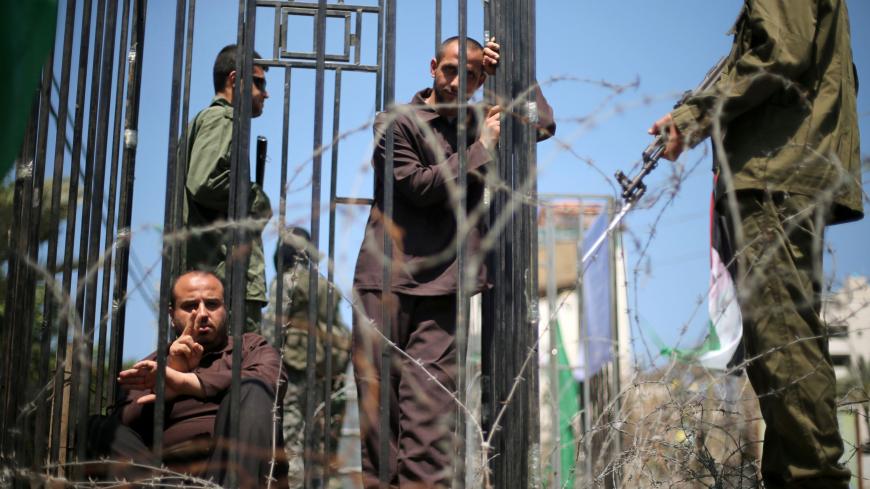 Men play the role of jailed Palestinians and Israeli soldiers during a rally in support of Palestinian prisoners on hunger strike in Israeli jails, in Gaza City, Gaza, April 17, 2017. - REUTERS/Mohammed Salem

RAMALLAH, West Bank — About 140 Hamas members incarcerated in Israel have suspended the hunger strike they were staging to protest the Israel Prison Service's installation of potentially cancer-causing devices to jam calls from cellphones that have been smuggled in to prisoners.

On Sept. 26, the Commission of Detainees and Ex-Detainees Affairs released a statement saying, "An agreement between the movement’s incarcerated leadership and intelligence of the Israeli prisons was reached” the night of Sept. 25, and that the Israel Prison Service "was committed to meeting a number of the demands which the protesting inmates made.”

The commission said the agreement requires the Israel Prison Service to stop using the jammers. The devices are being studied internationally for possible links to cancer and other health problems. The signal jammers also interfere with radio and TV frequencies. The commission said the prison service agreed to install landline phones and make them available five days a week.

Israeli media, however — including Haaretz, the Times of Israel, and others — reported that the prisoners "caved" on the jamming device issue and received very little in return for ending the strike. The publications said 88 to 100 prisoners participated, not 140.

The inmates said they warned the prison service against any attempt to avoid complying with the agreement, as happened with a similar deal in April. The prisoners then had reached an agreement with the prison service that reportedly stipulated that the service would halt the operation of the jammers and install landlines in exchange for the prisoners' ending a weeklong hunger strike. However, prison authorities did not meet their end of the deal.

The Hamas Office of Prisoners' Affairs issued a statement Sept. 26 saying that failing to follow through on the agreement "will result in wider protesting measures.”

Some of the leaders were transported from Ishel and al-Naqab prisons to Ramon to attend the meeting; the prison service agreed to this in an attempt to keep tensions from elevating, Amani Sarahne, spokeswoman of the Palestinian Prisoners Club, told Al-Monitor.

Ali al-Maghrabi, a spokesman for Hamas' Office of Prisoners' Affairs, also told Al-Monitor that the prison service agreed to transport the leaders to meet in Ramon Prison in an effort to maintain order.

About a week later, however, the prisoners went on strike, and left open the possibility that they might also shut down some prison sections and dissolve the senior leadership.

The prisoners' leadership committee is important as it allows the prison service to resolve issues with inmates, especially in a crisis situation, through dialogue with the leaders without having to deal with each inmate separately. The recent agreement was reached with the senior leadership.

Maghrabi said, "There are implicit understandings between the incarcerated leadership committees of the various factions, including Hamas, and the [prison service] to have the relations between the latter and the inmates regulated through the leadership in charge of them” to communicate inmates’ demands to the prison service and hold talks in their name.

Maghrabi said that the prison service, after procrastinating about the April agreement, “did install a number of land phones in [some sections] of al-Naqab and Ramon prisons, and the juvenile section in Damon Prison. Yet the [prison service] is limiting and complicating the land phone use in Ramon and al-Naqab prisons."

So although the prisoners and the prison service have a new agreement, if the service doesn't abide by it, the situation could escalate at any moment.