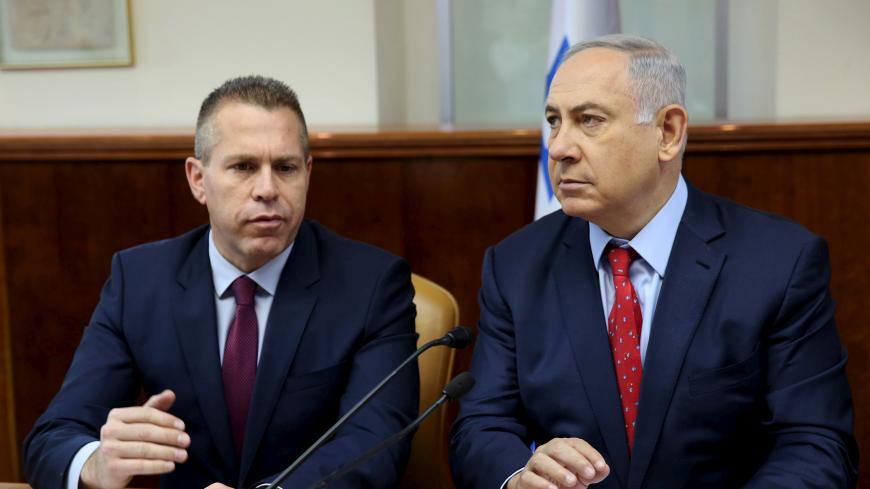 The decision of Public Security Minister Gilad Erdan to introduce cellphone blocking technology to high-security prisons is logical. For years, Israel's Prison Service has been fighting the smuggling of cell phones that enable Hamas and Islamic Jihad prisoners to transmit instructions for terror attacks from within the prison cells.

The Israel Prison Service occasionally searches prisoners' cells for phones, usually after receiving intelligence about them. One large operation took place in August 2016, when the Prison Service raided the sections where Hamas prisoners were jailed in the Nafha and Eshel prisons, transferred the prisoners to nearby facilities and conducted a thorough search for the hidden devices. The prison administration announced that in addition to finding cellular devices and SIM cards, they also uncovered instructions and directions for conducting terror attacks outside the prison.

Two years ago, Knesset member Basel Ghattas of the Arab Israeli Balad Party was convicted of smuggling cell phones to a security prisoner in Ketziot Prison and sentenced to two years. As a legislator, Ghattas was allowed to meet with Palestinian prisoners, but he was caught giving cell phones to a Hamas prisoner. In court, Ghattas argued that he acted from humanitarian considerations without intent to harm national security.

A phone is of great value in a prison. It allows incarcerated leaders to retain their status in the hierarchy of their movements, transmit organizational messages and even direct terror attacks. A phone also allows the prisoners to remain in close connection with family members and friends. It is difficult to judge the extent of the issue and estimate the number of phones among the thousands of security inmates imprisoned in Israel. However, according to one security source who spoke to Al-Monitor under condition of anonymity, there are probably several dozen such devices scattered among the various facilities.

The source explained that Hamas sees "the security prisoners branch" as "one of the movement's leadership branches," saying, "Higher-ups of the movement take the opinions of the prisoners into consideration in every strategic decision: regarding cease-fires with Israel, an arrangement, Gaza fence riots, a period of quiet, hudna [temporary truce], prisoner exchange deals [like the Shalit deal] and all other issues important enough to require the agreement of all the branches of Hamas' leadership. The devices are smuggled to the prisoners in various ways, usually by relatives in the course of family visits.’’

The battle against the phones reached new heights two weeks ago with a pilot program in the Ramon and Ktzi'ot prisons, where a new electronic device blocks cellular signals. It is not clear why it took the Prison Service so many years to introduce a relatively simple jamming system that has been in use for many years in large organizations and educational institutions throughout the world. The timing is problematic: The devices are being introduced at an especially sensitive time in the Palestinian territories.

On March 3 it was reported that the security system objects to Erdan's move. According to the news reports, after evaluating the situation, the Israel Defense Forces issued a warning: "In light of the general current instability, it is recommended at this stage not to widen the pilot program. Instead, the timing for its implementation should be re-examined in another few months, in accordance with developments." The reasons given included the growing distress in Gaza, tension on the Temple Mount, the elections in Israel and the deduction of tax revenues to the Palestinian Authority. In short, the security system feels that the introduction of the phone-blocking apparatus is equivalent to opening a new front against the Palestinian prisoners that might be explosive.

In response, the Palestinian leadership within each prison announced that they will no longer cooperate with the Prison Service. To those who are unfamiliar with the dynamics in Israeli prisons, it may sound strange, but the Prison Service greatly depends on the prisoner leadership. These leaders are responsible for the daily lives and employment of the security prisoners, including transmitting instructions from the Prison Service. Without this cooperation, chaos would reign in the high-security prison wings, where the guards would find it very difficult to control thousands of hostile inmates.

Erdan was unfazed by the warning, tweeting, "I have no intention of delaying this important project."

But the security system is much more worried about something else: how Erdan's move will affect what happens outside the prison walls, in the territories.

The prisoner leadership has asked the Palestinian Prisoners Club in the West Bank for help in their campaign. They want Palestinians to conduct demonstrations on their behalf and physically clash with Israelis at friction points. After all, they say, the prisoners, who sacrificed themselves on behalf of the Palestinian struggle to end the occupation, are now under assault. The message sent from the prisons to the prisoner organizations, and from there to the Palestinian media, is that Israel has opened war on "the best of our sons" by targeting the funds the Palestinian Authority gives the families of suicide attackers and Palestinian prisoners. Now it's threatening the terms of incarceration that have evolved over decades and created a working peace within the prison system.

The security system won’t say so explicitly, but a taint of political machinations surrounds Erdan's decision — even though it's logical, even self-evident. The public opposition of the security system to the pilot project proved that in these stormy pre-election days almost everything is political and no one will pass up an opportunity for a political taunt.

"Stop being afraid of terrorists, Mr. Netanyahu," tweeted Education Minister Naftali Bennet. "The terrorists threaten to get annoyed if you block their illegal cell phones in prison, so you give up? … Block them today already, I'll back you 100%!"