How Palestinian factions are capitalizing on the unrest

Palestinian factions are taking advantage of the popular uprising to restore some of their dwindling popularity on the Palestinian street by diplomatically refusing to take a leadership role. 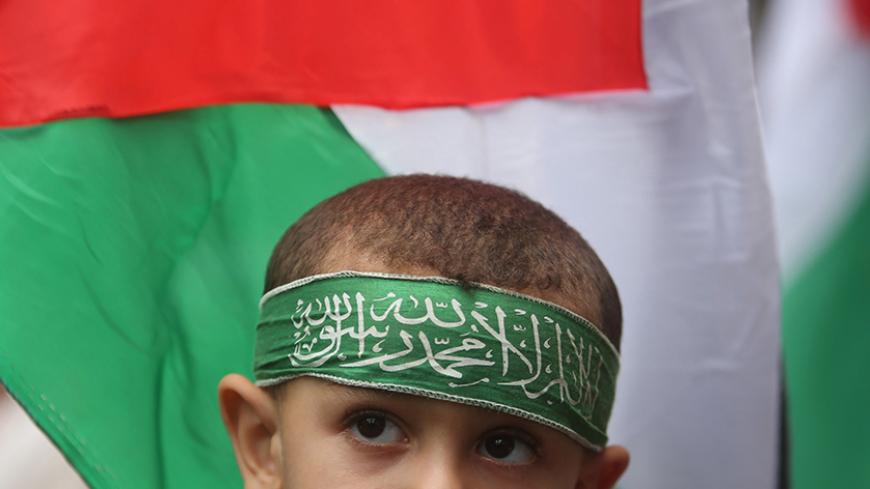 A Palestinian boy wears a Hamas headband during an anti-Israel rally, in the central Gaza Strip, Oct. 23, 2015. - REUTERS/Ibraheem Abu Mustafa

The Palestinian factions are still refusing to officially participate in the uprising taking place in the occupied territories since the beginning of October. Perhaps they prefer to preserve its spontaneous dimension and popular character without directing it through a field command or organized political leadership, despite the increasing calls from some Palestinian parties for such efforts.

Hamas’ media official Raafat Morra told Al-Monitor, “Hamas has accomplished a number of political achievements from the intifada and is working to ignite it, because it is proof that the Palestinian Authority has failed. We have seen that some Fatah-affiliated groups in the West Bank have been recently calling on Izz ad-Din al-Qassam Brigades, Hamas’ military wing, to take revenge against the Israeli occupation. The intifada has united the people, the land and the cause.”

However, Sufian Abu Zaida, a member of the Fatah Revolutionary Council, was reluctant to draw any conclusions. “There is no agreed-upon description of the current events among Palestinian factions. These events are characterized by Palestinian organizations standing behind the confrontations and not in the forefront, such as in the first intifada in 1987 and the second intifada in 2000,” he told Al-Monitor.

It seems remarkable that after more than 20 days since the outbreak of the violence, the Palestinian factions have failed to agree on a common name for the events. There has been no agreement on its nature or objectives, and no one knows how long it will last. Although the youth participating in it are largely affiliated with Fatah or Hamas, they might not be receiving any direction from them. A unified political leadership might require factions to make concessions to one another, which would diminish their popularity before their organizational bases.

Abdul Alim Dana, a Popular Front for the Liberation of Palestine leader, told Al-Monitor, “Forming a unified leadership is linked to the Palestinian factions’ agreement on a common national program to confront the occupation, and there are ideas among some factions about the formation of this leadership, but most of those participating in the intifada are not affiliated with political movements.”

Abu Zaida said, “Fatah and Hamas have different agendas for the current confrontations with the Israelis. Hamas wants to ignite the West Bank and is urging military operations against settlers while refraining from involving Gaza in the fight with Israel, which might be costly. Hamas has yet to recover from the last war in Gaza in 2014, and Palestinians in Gaza are still suffering the repercussions of this war and are not ready for a new one.”

He added, “However, Fatah wants to make sure the intifada remains within the context of a peaceful popular resistance, and this is why its youth and cadres are active in the peaceful confrontations.”

Palestinian factions are avoiding partisan and factional polarization and have refrained from talking about a single political movement leading the confrontations to obtain public support. They rather focused on the need for Palestinians to remain united against Israel, while avoiding promoting specific factions and organizations.

Al-Monitor learned from prominent Hamas sources that the movement made a political decision not to speak in the media in a way that would create tension on the Palestinian arena, and rather limited statements and television coverage of the events to a national perspective.

It was clear that the Hamas-affiliated Al-Aqsa TV began broadcasting around-the-clock coverage of the confrontations at the start and invoked national Palestinian national symbols. Its hosts wore the traditional keffiyeh and hosted political analysts and guests who focused on national discourse and not factional speech.

This impartiality prompted Fatah leaders such as Bakr Abu Bakr to state Oct. 20 that Hamas is changing its political tactics in its current media discourse by eliminating provocative speech against the PA and Fatah and broadcasting Fatah anthems for the first time since Hamas took control of Gaza in 2007.

Hamas’ foreign relations chief Osama Hamdan told Al-Monitor, “Hamas does not deal with the intifada with narrow factional and partisan dimensions; it is dealing with it as a popular will without getting involved in a partisan competition with Palestinian forces, which might abort the intifada. [Palestinian forces] avoid saying that this or that faction is igniting the intifada, although Hamas has a great role in enhancing and developing it. We are not talking about partisan quotas, but rather a national action that everyone should participate in, and Hamas is doing its part.”

This is why Palestinian factions began issuing unified statements instead of individual ones, the most recent of which came on Oct. 16, calling on Palestinians to go to points of engagement with the Israeli army, such as military checkpoints.

Sari Arabi, a Palestinian writer who regularly writes about Hamas, told Al-Monitor, “One can talk about four basic factions: Hamas, Fatah, Islamic Jihad and the PFLP, and when talking about their popular presence, one can see an enormous difference in terms of organizational and popular support. Since 2007, Hamas has suffered deep systematic marginalization, which paralyzed its ability to organize. Fatah, for its part, suffered for its affiliatian with the PA and building a network of interests related to it, which resulted in an organizational slack, although its youths are participating in the confrontations through the student movement or for personal motives.”

Perhaps the current unrest represents a golden opportunity for all Palestinian factions, especially Fatah and Hamas, to restore their popularity, a great part of which they lost during the years of division since 2007. Fatah promotes a strictly popular resistance, while Hamas does not mind carrying out military operations.