Will tables turn in favor of youth in Palestine?

The new Palestinian generation leading the intifada did not wait for instructions from political leaders, who may now have to look to the youth for direction. 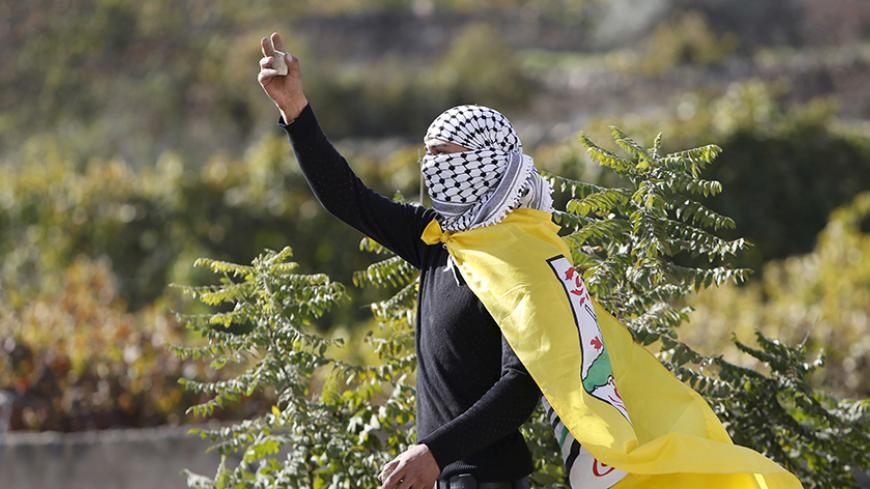 A Palestinian protester holds a stone during clashes with Israeli troops in the West Bank town of Halhul, north Hebron, Nov. 14, 2015. - REUTERS/Mussa Qawasma

Since the outbreak of the current Palestinian uprising in early October in the West Bank and Jerusalem, young people have been the most involved in the daily incidents with the Israeli military. They are either the perpetrators of stabbings or vehicular attacks or the victims. According to a survey published by Al-Quds Center for Political Studies, 45 Palestinians under 20 had been killed as of Dec. 10, 40% of the total dead. Most of them died in field clashes with the Israeli military in some regions of the West Bank, according to the survey.

The unrest has led to the formation of the Intifada Youth Coalition, created to lead activities, demonstrations and confrontations with the Israelis. This coalition seems to be a substitute for the organizational field formations that were established in the previous intifadas.

The Unified National Leadership of the Uprising (UNLU) was established by the Palestine Liberation Organization during the first intifada, also known as the stone-throwing intifada, in late 1987. It initially included Fatah and the Democratic Front for the Liberation of Palestine (DFLP).

The participation of young people in the current Palestinian uprising is not surprising. The Palestinian Central Bureau of Statistics announced in August 2015 that Palestinian society in the West Bank and Gaza Strip is a young society and will remain so in the years to come, as youth between the ages of 15 and 29 represent 30% of the total population. Of that group, 37.4% are in the 15-19 age bracket, and 62.6% are 20-29, according to the statistical bureau.

Farid Abu Dheir, journalism and communications professor at An-Najah National University in Nablus, told Al-Monitor, “The current Palestinian uprising is an indication that the young Palestinian generation has imposed itself on the Palestinian scene, using a number of nontraditional tools, including social media. It is trying to step away from the Palestinian parties, which have been known for decades on the Palestinian arena.”

He added, “Nevertheless, it is difficult for this young generation to step away from Palestinian parties by establishing new organizational formations, rejecting factions’ calls for organizational events or declining involvement in Palestinian factions. This is because factions are still in control of the Palestinian arena, although they are trying to adapt to the emergence of youth as actors on the arena, not passive figures, as in the past decades.”

The most prominent feature in the current situation is that the new generation leading it are between 15 and 25 years old. They were born during the Oslo Accord era in 1993. This generation has only witnessed Israeli violations against Palestinians including killings, the confiscation of land, raids of Palestinian cities and the thwarting of the idea of a Palestinian state. They realize that the Palestinian Authority’s (PA) promises have been crushed under the boots of Israeli soldiers as they storm the West Bank.

Since the outbreak of the current uprising, dozens of articles in the Palestinian media have discussed the new Palestinian generation. Al-Quds newspaper reported Oct. 26 that this generation has grown up at a time when the Palestinian factions have weakened. It is a generation that wears spiky hairstyles and distressed denim, is active on Facebook, Twitter and Instagram, listens to Justin Bieber, and watches Angelina Jolie movies. This generation may be religious or secular and might not read Marx. Yet it hates the Israeli occupation that has blocked its way to university study, arrested its brothers, demolished its neighbor's house and built settlements. This environment has created a generation that cannot coexist with the Israelis, nor can it adapt to or cope with the occupation, according to the Al-Quds article.

The PA’s former Minister of Prisoners Wasfi Kabha told Al-Monitor, “The new Palestinian generation leading the uprising has overcome factional dimensions and Palestinian partisan considerations. The proof is that it is managing the intifada’s daily activities in the absence of organized command centers, unlike during the previous ones. This generation is leading the intifada in the absence of administrative and field structures and is moving forward automatically and spontaneously.”

He added, “At the same time, it seems hard for this generation to establish a new Palestinian organizational front that is separate from the existing Palestinian factions, as the Palestinian community is a partisan one by nature. No matter how hard young people try not to be committed to organizational instructions, their factional affiliation brings them back into the arms of these organizations.”

Khalil Assaf, head of the Consortium of Independent Palestinians in the West Bank, which includes dozens of independent national figures from different political backgrounds, told Al-Monitor, “Palestinian youths look at political organizations with disdain, as this new Palestinian generation realized that these factions have failed to achieve their political objectives. This is why most of them feel that they are no longer part of these organizations. Thus, they joined the intifada spontaneously in the absence of a leadership, while Palestinian leaders refrained from participating and engaging in it for personal calculations and political considerations. This applies to all Palestinians, be they religious and secular or affiliated with Hamas and Fatah.”

Perhaps one of the most important features of the current situation is that a new Palestinian generation took to the streets without waiting for instructions from political organizations. Perhaps this generation has overcome and gone beyond these organizations, which may be forced to join and try to keep up with the action on the ground if it continues indefinitely.