Is this Palestine's Arab Spring?

As the wide unrest continues in Palestine, many wonder if this uprising could be a belated Palestinian Arab Spring that will bring about change in the entire region. 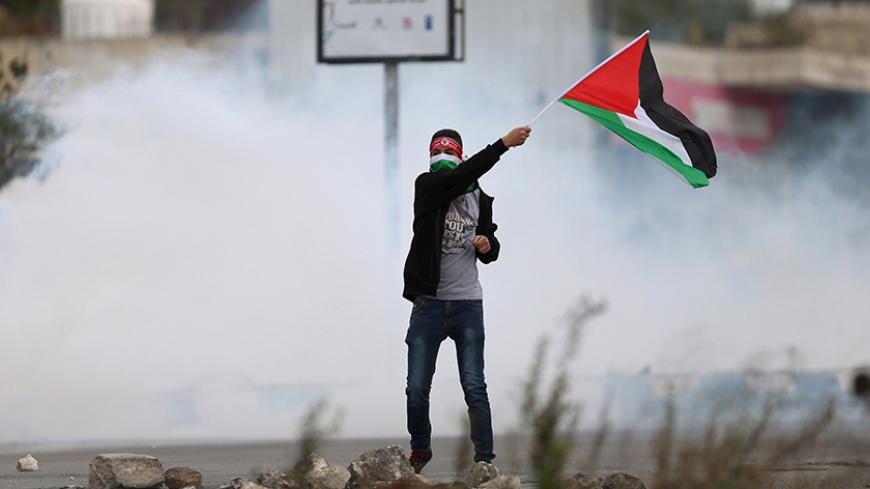 A protester waves a Palestinian flag in front of tear gas fired by Israeli troops during clashes at Hawara checkpoint near the West Bank city of Nablus, Nov. 28, 2015. - REUTERS/Ahmad Talat

GAZA CITY, Gaza Strip — The Arab Spring model, represented by the sweeping Arab revolutions in Tunisia, Egypt and Libya, has failed to free the Gaza Strip and the West Bank from the political division between Fatah and Hamas. The trouble started in June 2007, when the latter took control of the Gaza Strip by force of arms. It has also failed to bring down the existing regime and build a new one.

Indeed, it was not long before the popular movement, which erupted in 2011 against the backdrop of a wave of Arab revolutions, lost momentum. The small outbursts of popular protests that broke out in subsequent years, such as the April 29 movement in 2015, have been futile as well.

These outbursts of protests are happening once again today in Palestine, but this time they are directed against the Israeli forces in intense confrontations that have been ongoing since Oct. 1.

Social media sites have been at the heart of these clashes, documenting the people’s anger and despair. They have served as platforms for people to publicly criticize major parties, such as Fatah and Hamas, which are no longer sacred in the eyes of the 1990s generation, seen as the driving force behind the current uprising. Today, these young Palestinians are rising against the Israeli forces on their own, without orders from any political party or leader.

This decentralization in leadership, whereby social media has become the main driver of protests, is very much akin to the Arab Spring revolutions, such as those in Tunisia and Egypt.

Mohammed Abu Rab, a media professor at Birzeit University, told Al-Monitor, “We cannot exactly say that the current uprising is being led through social media. Social networking sites are actually the main means to mobilize young people, as most events are called upon through social communication and not through political parties.”

According to Abu Rab, the absence of any leadership in charge — whether in the field or on social media — would cause these mobilization and advocacy calls to lose momentum without new developments or events to stimulate them.

Abu Rab further said that there are clear similarities between the Palestinian uprising and the Arab Spring in terms of relying on social media to ramp up support and the absence of anyone leading the movement.

“However, there is a major difference that needs to be pointed out. The Arab Spring revolutions were against the different Arab regimes, while the Palestinian uprising is against an occupation force,” he added, stressing that the latter is more difficult, given the harsh punishment measures set by the Israeli forces, such as arrests, house demolition and killings.

“This is true despite the fact that ramping up support and mobilization against an occupation force is easier than a revolution against a regime,” Abu Rab added.

Social media and free communication on the Internet at large have raised a new awareness among young people, prompting them to adopt a new rhetoric of patriotism unrelated to factional and partisan affiliations. In an Oct. 19 post on his now-deleted Facebook account, Ahmed al-Herbawi, 19, who died on the eastern border of the Gaza Strip after taking a bullet in the chest, wrote, “I do not stand with the Ramallah authority, nor with Hamas, the [party] of hypocrisy, injustice and lies.”

That Palestinian political parties have yet to officially claim leadership of the current uprising is further proof that young people are its lifeblood. They are pinning their hopes on the Palestinian people to make the Arab Spring work in Palestine whether in the field or online. Israeli Prime Minister Benjamin Netanyahu criticized the social networks as a key instigator of the escalation in Jerusalem and the West Bank.

“The main battle should be focused against the instigating social media networks,” Netanyahu said.

Ahmed Youssef, a Hamas leader, told Al-Monitor, “A great part of the greatness of this intifada lies in its ambiguous aspect and the secret identity of the people behind it, which is one of the reasons for its success.

“I am convinced that these young people are the leaders of this spontaneous outburst of protests. They are relentless and persistent, working under the banner of one national flag and one anthem, rather than the banner of one party,” he added, stressing that there are long-term plans and objectives and that every day brings a new achievement and another surprise.

For his part, political writer in the Palestinian Al-Ayyam newspaper Akram Atallah believes that young Palestinians have gone beyond the different factions, acting on their own without any directives, as the different Palestinian factions have proved in past years unable to bring about change, stop the rampant settlements and save Jerusalem.

“Young people took the initiative to act, as they saw the political parties indifferent to the national interests. They decided to rise up on their own but not with the intention to belittle these parties, but to incite and encourage them to become more efficient and join the ranks of the uprising,” Atallah told Al-Monitor.

Bahaa Alian, 22, who died attacking Israelis on a Jerusalem bus on Oct. 13, was a living example of the will of the young people to distance themselves from the banners of the political parties. “I ask the different factions not to embrace and adopt my martyrdom, as I died for the sake of my homeland, not yours,” he said 10 months before he carried out his attack.

Atef Abu Sef, editor-in-chief at the Institute of Public Policies, believes that the true leader of the uprising is the arena itself, telling Al-Monitor, “The protest arena is the leader of this intifada, as young people act impulsively when on the ground.” He stressed, however, that while many of the youth are politicized and typically follow a specific party, in this uprising no one is following their party’s political program, but rather responding to the situation on the ground.

“The intifada does not raise any big slogans. It simply reflects the real pulse of the people,” he added.

A statistical study published Nov. 9 by the Jerusalem Center for Israeli and Palestinian Affairs Studies showed that among the overall attacks carried out by Palestinians since the beginning of October, lone operations amount to 60%, 22% had organizational connections and 18% were affiliated with groups — which does not mean that the organizations or groups claimed the attacks, clarified the study.

For her part, activist Ibaa Rizk told Al-Monitor that what distinguishes this intifada is that every young man is a leader in it, as there is no centralized leadership, arguing that political parties have lost their credibility in the eyes of the young people.

She added that despair is the main thing pushing young Palestinians to rise up. “We are the generation of disappointments and losses. We have lived through the recent wars, blockade, infighting, the failed Palestinian reconciliation and peace process, and the false promises to open crossings and improve the situation,” she said.

Rizk is reluctant to call the events in Palestine a Palestinian Arab Spring, as “the Arab Spring revolutions brought nothing but disasters to the Arab world. That is why we shall wait and see the turn of events without labeling what is happening now,” she said.