Asmaa al-Ghoul speaks to Palestinian activists who hoped, and failed, to launch their own version of the Arab Spring. 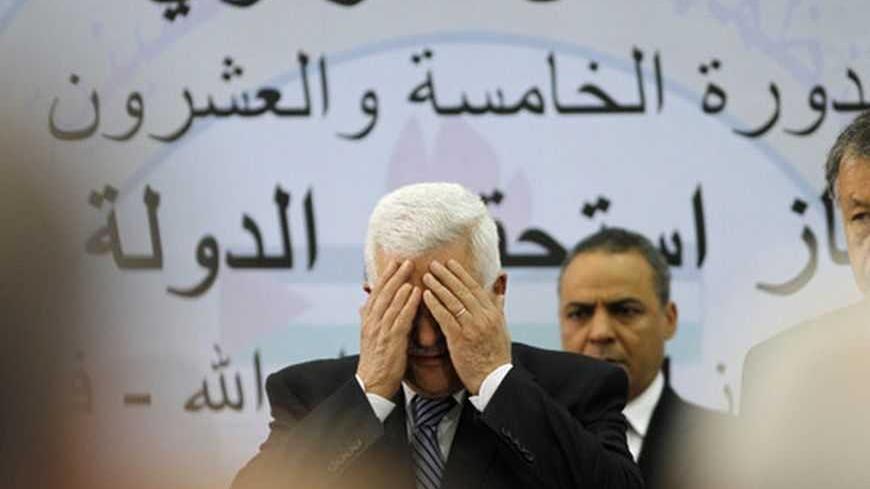 “Is it easier to get a visa to Belgium or Sweden? How do I apply for asylum? Should I tear up my passport or hide it? Will the iris scan be conducted in the first country in which I arrive or the country in which I will seek asylum?” These questions, among others, are what busy the mind of 23-year-old Mahmoud Yahya these days.

Only a year ago Mahmoud was optimistic for change, and two years ago in 2011, Mahmoud took to the streets to effect that change. He says he felt like a giant then, capable of anything.

Mahmoud told Al-Monitor, “With every passing year, my despair increases. When I recall what I was like a year ago, I remember the hope I had that our hate-filled political and social reality could change. But when I look at how I was at the beginning of 2011, I cannot believe how convinced I was that I was Superman, and the same goes for how I saw all the other young people. The Arab revolutions had truly changed us.”

He added, “For the first time we felt like we had some agency. We went out to the streets on Dec. 5, 2010, and we confronted Central Security of the deposed government without blinking an eye. We broke through our collective fear and took to the streets protesting the closure of the Sharek Youth Forum. We took to the streets again in 2011 during the Egyptian and Syrian revolutions and were imprisoned and beaten, which also happened to our counterparts in the West Bank. Finally we had our own revolution on Mar. 15, 2011. Our defining chant was, “The people want to end the division!” They beat us, slandered us, broke our limbs, smeared our reputation and blackmailed us, which culminated in the killing of our Italian comrade Vittorio by unknown assailants. From that moment on, sadness and frustration would silence us forever.”

Mahmoud gazed at the ceiling, eyes welling up, “We believe in our strength, but we were romantic. When I saw all of the March 15 activists emigrating and traveling away from Gaza, I knew that we had failed to bring about our Palestinian Spring, so I decided to travel as well.”

Daily resistance, that is our spring

Despite the many frustrations inherent in the outcomes of the Arab revolutions, not everyone shares Mahmoud’s despair regarding the reality facing Gaza and the West Bank. For instance, 22-year-old Aba Rizak says she sees the Arab Spring continuing everyday in Palestine. Its latest manifestation was in the tents erected by youth activists in the village of Bab al-Shams within Israeli-occupied territory north of Palestine. Aba told Al-Monitor, “We take to the streets and will continue to take to the streets, whether against the occupation or the governments in the West Bank and Gaza.”

Aba believes that oppression feeds the continuation of the Arab Spring, because at its core, the Arab Spring is based on sacrifice. She recalls her torrid experience being detained in the women’s police station in Gaza. She remembers the extortion and blackmail to which she and her friends were subjected, and the violent attempts to coerce them into signing a pledge in accordance with Sharia law banning them from taking part in unlicensed demonstrations and other activities.

The political analyst Atef Abu Saif agrees with her, saying, “It is admittedly narcissistic yet true that we as Palestinians have helped to advance the Arab peoples in regards to freedoms, relations between the ruler and the ruled, and our daily commitment to the cause of national liberation. Our version of the Arab Spring is the all-important, ongoing resistance against the occupying power. Thus Palestinians have become accustomed in such a way that prevents them from falling silent when a government or an authority confiscates and suppresses their freedoms.

In an interview in the Library of the Legislative Council, Yahya Moussa, a representative from the Hamas bloc in the Legislative Council, told Al-Monitor, “There was an Intifada in 1987 and again in 2000, now it is expressed in various ways as a resistance and struggle for our rights. If the Arab Spring is the struggle for rights, then our Arab Spring is advancing and continuous, and permanently re-expressing itself.”

If the Arab revolutions can be likened to the spread of a contagion across the Middle East that secured freedoms as well as economic and political demands, then are the youth initiatives, such as those in which Mahmoud and Aba took part, a parallel expression of the Arab Spring, or is the situation in Palestine more nuanced than revolution and overcoming injustice?

Twenty-four-year-old youth activist Ahmed Balousha believes that the reason for the failure of the Arab Spring in the West Bank and Gaza was the expressed goal of ending division. He continued by saying: “What we truly wanted was to raise banners which read, ‘Down with the regimes of the West Bank and Gaza,’ and, ‘The two governments are competing to achieve their own interests,’ and, ‘Suppression of freedoms.’ Yet we settled for raising banners demanding that the political system be reformed, not toppled, because this way no one could be accused of airing sentiments which reflect the objectives of the occupation. When I look back on that, I feel that we only lied to ourselves, saying that we were representing the Arab spring, when really we failed to take any meaningful action.”

Aba explained that the demonstrations of the Arab Spring demanded radical changes and the ouster of corrupt regimes, whereas the demands of the demonstrations in the West Bank and Gaza leaned toward "reform" more so than "change." She pointed out that they were trying to please all sides and unite the two corrupted governments, which had lost their legitimacy, and that this was the main difference between the Arab uprisings and those of the West Bank and Gaza.

Defending Hamas against this assertion, MP Yahya Moussa said that each people of the different Arab countries demanded the end of authoritarianism so that they may govern themselves. Thus the revolutions were economically and socially reformative, and altered how the national will was to be expressed.

He went on to add, “In Palestine however, where there is no state but rather an occupation, our goals became focused on liberation and the right of return. It is difficult to talk about the logic of the Arab Spring while under occupation. In both the West Bank and the Gaza Strip there is a powerless authority with its hands tied. If we were to blame the authority that we established under occupation, then this would not fix anything because overthrowing it would not make the occupation leave. If the masses did overthrow the authority, the alternative is direct occupation. It would be as if we did the enemy’s bidding, thus ours is an ambiguous spring.”

Political writer Abu Seif believes it is mistaken to constantly search for Palestinian parallels to the Arab Spring, mainly because Palestine’s social, cultural, and political reality differs greatly from those of other Arab countries. It is difficult to search for the seeds of the Spring in Palestinian history because it overlooks the true nature of things. If the Arab Spring itself is the search for equality, then this cannot be reduced to a single historic moment, because the Palestinians’ search for freedom and national and civil rights is rooted in the lands confiscated by the occupation.

Has the Palestinian spring then failed?

In an interview with Al-Monitor, Jurist Mustafa Ibrahim, who works as a researcher at the Independent Commission for Human Rights and closely follows the March 15 Youth Movement, said that the main problem was the inspiration that the Arab revolutions imparted to the young people in Gaza and the West Bank. The youth attempted to recreate this phenomenon in their country. However if they looked at the history of the youth movement in recent years, they would find that they took to the streets before the Arab revolutions.

For instance, in January of 2010, there was the “Wake Up” movement amongst Gaza youth, which walked the streets carrying a large box symbolizing a ballot box, demanding the right to vote and choose their government and their president. Wake Up was part of the March 15 Youth Movement that was highly successful in influencing the street in both the West Bank and Gaza. They embarrassed the two governments to the extent that after the signing the reconciliation agreement on Nov. 5, 2011, Khaled Meshaal, head of Hamas’s Political Office, and President Mahmoud Abbas said that the youth movement  was one of the factors that pushed them toward reconciliation.

Mustafa believes that the gradual escalation of the youth movement was an innovative step, but it ended quickly because of intensive repressive measures, which included beatings, arrests, and indictments in both Gaza and the West Bank. In addition, certain factions tried to ride their wave and implant some of their members into the independent youth movements so as to further private interests, and of course some young people had personal ambitions.

In an interview with Al-Monitor, Ihab al-Ghussein, the head of the government’s media office in the Hamas-led Gazan government, and who at the time of the interview was the spokesman of the Interior Ministry, stated that, “It is unclear whether the movement took to the streets just for the sake of taking to the streets, or if it truly meant to end division. If their goal was to truly end division, then the fact that the prime minister on 15 March 2011 invited President Mahmoud Abbas to visit Gaza for the first time must be considered a major step forward in the eyes of the youth movements. If this is the case, why continue with rhetoric that rejects all parties?”

Aba feels that the March 15 Youth Movement’s main problem was that it was confined to the West Bank and Gaza, as if the Palestinian people were limited to only these two territories, pointing out that the majority of Palestinians (within Israel and in diaspora) ignored the movement. Moreover, factions were able to dictate the direction of the movement and did so in accordance with their own agendas, adding bitterly, “Factions succeeded in hijacking the momentum of our resistance because of my generation’s lack of political experience and its susceptibility to splitting into factions like the rest of the Palestinians.”

At the end of our interview, Mahmoud received a call that informed him that he had obtained a visa to Poland. Beaming, he said, “Finally I will apply for asylum.” However confusion soon swept across his face and he asked, “But is Poland considered a European country? And is it possible to go to Belgium if I dislike it?!”